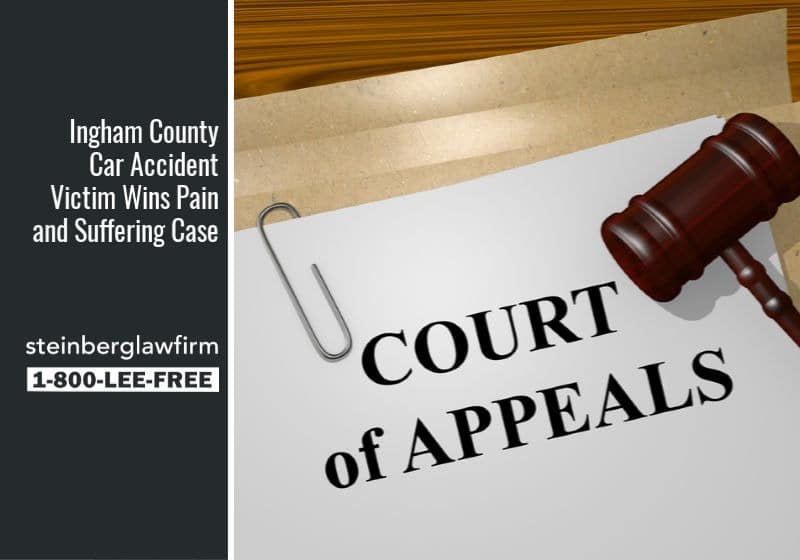 The Michigan Court of Appeals issued a decision on a case involving a car accident victim seeking money for pain and suffering following a bad crash. In Hagerman v. Kakar, docket no. 346056, (unpublished 4/23/2020), the defendant’s vehicle struck the plaintiff’s car at an intersection. There was no dispute the defendant caused the crash.

What was disputed was how injured the plaintiff was, along with the impact his injuries had on his life following the accident.

At the accident scene, the plaintiff reported neck pain and was treated at a hospital. He was later diagnosed with a sprained ankle, cervical strain, straightening of the cervical lordosis, cervicalgia and a shoulder strain.

At his deposition almost two years after the car wreck, the plaintiff reported he was still feeling pain his left shoulder, neck and was still experiencing headaches. He also said he was having shoulder pain and headaches before the accident. He missed 30 days from work. He testified he did not lift weights with his left arm, play basketball or football, or swim long distances. However, he admitted he did not go the gym often before the crash.

He also testified he continued to go out socially with friends, but was limited in the types of activities because of the pain and discomfort. In addition, although he testified he had difficulty driving, he was still able to drive. He also purchased a motorcycle after the accident.

The defendant filed a motion with the Ingham county trial court to dismiss the case, arguing that under MCL 500.3535, the plaintiff failed to show the car accident affected his ability to lead his normal life. The trial judge agreed, and the case was dismissed. The plaintiff appealed to the Michigan Court of Appeals.

1. It is objectively manifested, meaning it is observable or perceivable from actual symptoms or conditions other than the injured person.

2. It is an impairment of an important body function, which is a body function of great value, significance or consequence to the injured person.

3. It affects the injured person’s general ability to lead his normal life. This means it has had influence on some of the person’s capacity to live in his or her normal manner of living. Although temporal considerations may be relevant, there is no temporal requirement for how long an impairment must last. This examination is inherently fact and circumstance specific to each injured person, must be conducted on a case-by-case basis, and requires comparison of the injured person’s lie before and after the incident.

This last element was the point of contention in this case. According to the Appeals Court, viewing the evidence in the light most favorable to the plaintiff (which is required on a motion to dismiss), the plaintiff demonstrated enough evidence to show his general ability to lead his normal life was affected by the Ingham County car crash.

First, although his doctor only instructed him to take a week or two off work, the plaintiff was not able to work for 30 days. He attempted to return to work, but was not able to perform his normal tasks. The Court ruled the plaintiff does not need to show that his general ability to lead his normal life had been destroyed because there is no minimum requirement as to the percentage of a person’s normal manner of living must be affected.

Second, the plaintiff had different issues following the crash that affected his life. He had difficulty getting out of bed in the morning, he couldn’t play basketball or swim long distances, and he could not walk his dogs as often or as far.

The fact he did not have a doctor formally restricting him from these activities was not dispositive. Instead, the fact an injured person is cautious about participating in an activity after an accident can demonstrate that an injury has had an effect on the person’s ability to lead his normal life.

This is a good decision by the Michigan Court of Appeals. The change in the Michigan car accident law last year created new statutory language for Michigan pain and suffering cases like this one. The Supreme Court case of McCormick v. Carrier, 487 Mich 180 (2010) was formally made into a written statute. This new language was supposed to make it easier for car accident injury victims, like the plaintiff in this case, to have a jury of his peers evaluate a case and award compensation.

In other words, it was supposed to make it harder for cases to get dismissed by a trial judge.

According to the new law, a person does not need to show their life was destroyed to get compensation. The law only requires a general change in their ability to lead a normal life. In this case, the plaintiff did just that. If you have any questions about Lansing car accident law, please call the car accident injury lawyers at the Lee Steinberg Law Firm, P.C. As always, the call is free at 1-800-LEE-FREE (1-800-533-3733). And we never change a dime until we win your case.