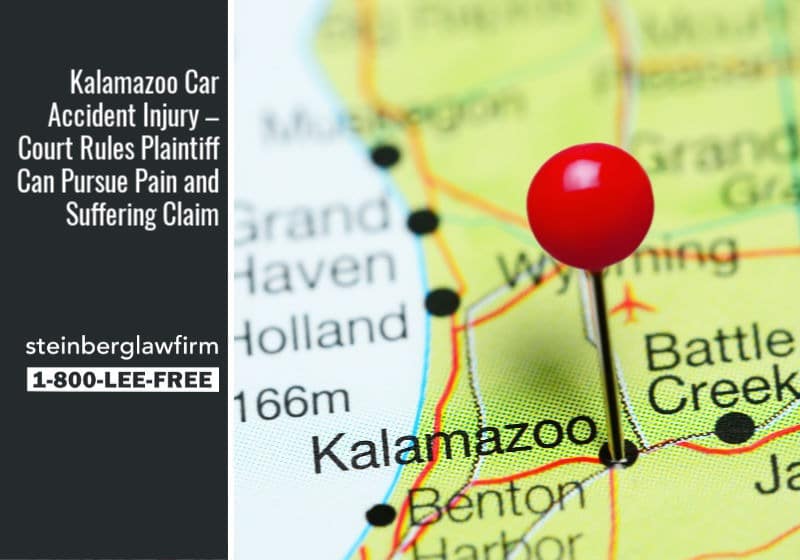 The Michigan Court of Appeals issued a ruling on a Kalamazoo car accident case this month that was interesting. It allowed the plaintiff to move forward with his case for pain and suffering compensation. The case is called Birchfield v. Chiodo, docket no. 348386 (unpublished, 6/25/2020).

The case involves a Western Michigan University student who was rear-ended while driving to campus. The plaintiff did not go to an emergency room from the accident scene, but testified to having low back pain that day and was examined at a health center two days after the crash. The record there indicated a history of off and on back pain, but his current plan stated “suggestive of disc inflammation, suspect exacerbation of same from motor vehicle accident.”

Two weeks after the accident, the plaintiff went to his own family doctor complaining of low back pain. The doctor prescribed pain medication, physical therapy, and instituted a 20-pound lifting restriction. The plaintiff went to 12 physical therapy sessions. Due to the pain, he was unable to complete classes that fall. He attempted to go back to school-part time the following semester but again failed to complete his courses because of low back pain.

The following summer he began receiving chiropractic care. The chiropractor observed a limited range of motion to his lumbar spine as well as “mild to moderate muscle spasms” in the lumbar area. This finding is important as we will later see.

The plaintiff returned to WMU that fall. The following winter he saw a pain medicine and rehab specialist who also documented a limited range of motion to his lumbar spine. A second pain doctor also noted low back pain affecting his activities of daily living. He was diagnosed with “spondylosis without myelopathy or radiculopathy in the lumbar region.”

The Western Michigan student filed a lawsuit for pain and suffering compensation against the at-fault driver. Negligence was not disputed, but the defendant did contend that the plaintiff failed to show he sustained a “serious impairment of body function”, and therefore was not allowed to obtain compensation for his injuries.

Under the Michigan automobile accident law, a plaintiff must demonstrate he or she has sustained a “serious impairment of body function” to obtain compensation for non-economic damages, such as pain and suffering and emotional distress.

MCL 500.3135(5) defines what this threshold injury requires, although the definition changed last year when the Michigan No-Fault Law was amended. At the time the plaintiff filed his lawsuit, a “serious impairment of body function” was defined as “an objectively manifested impairment of an important body function that affects the person’s general ability to lead his or her normal life.”

Even under the new law, this definition can be broken down into three prongs:

The plaintiff appealed this ruling to the Michigan Court of Appeals. In a split decision, the court of Appeals reversed the trial court’s ruling, and reinstated the plaintiff’s case thus allowing him to proceed with his case for his car accident injuries in Kalamazoo County.

In making this holding, the Court of Appeals found that the plaintiff had in fact demonstrated enough evidence for a jury to find that he did sustain an objective impairment and that his impairments were from the car accident. The Court said the plaintiff did show a physical basis for his subjective complaints of pain and suffering in a few differing ways.

First, his family doctor authored two letters relating his back pain to the car crash. In addition, two different examiners found the plaintiff’s range of motion was limited due to back pain and observative muscle spasms. Under Michigan law, a limited range of motion qualifies as an objective impairment. In addition, muscle spasms are also objective manifestations of an injury. Both are impairments that another person, such as a doctor, can observe. They are objective under the law and therefore the plaintiff demonstrated an objective impairment as required under MCL 500.3135(5).

The Court of Appeals went on to hold that the plaintiff demonstrated that the car accident in Kalamazoo generally affected his ability to lead a normal life, the last element a plaintiff must show to be eligible for pain and suffering compensation. The court noted a few different reasons for making this ruling:

Although his life was not destroyed by the car accident, the Court rightfully found that this is not the standard. Under Michigan law, one must only show that his life was generally affected his ability to lead a normal life. It does not require permanency or anything close to that. Because of this, the plaintiff could move forward with his case.

There was a dissent which had trouble reconciling the fact the plaintiff had some low back pain before the accident. The dissent also seemed to ignore the fact that although his medical records describe both muscle spasms and limited range of motion to his low back, these findings were not good enough to demonstrate an objective finding. This conclusion by the dissent is curious when Michigan law had held for decades that muscle spasms is observable and perceivable from actual symptoms and therefore ‘objectively manifested’ under the law.

This decision by the Michigan Court of Appeals is not published, and therefore is not binding on the lower courts in our state. However, it is still important. First, it gives this plaintiff the ability to receive justice and compensation for the wrong committed against him. Second, it can be utilized in lower courts to persuade judges in a similar case that a plaintiff should also be given the same benefit of the doubt.

Perhaps most importantly it the right decision given Michigan car accident injury law and the facts presented. The plaintiff in this case missed two entire semesters due to the car crash. He was not able to do basic hobbies and activities and treated with doctors for over 3 years following the accident. It interfered with his life in a meaningful and serious way. Michigan law only requires a showing of a “general ability to lead a normal life” and it is this writer’s opinion the plaintiff showed this.

If you have a question about a Kalamazoo car accident, call one of our Michigan car accident lawyers at 1-800-LEE-FREE (1-800-533-3733) and get your questions answered. We never charge a dime until we win your case and our experienced and friendly team of legal professionals are standing by, ready to help.