Some Insurance Companies Offering Refunds Due to Coronavirus
Skip to content 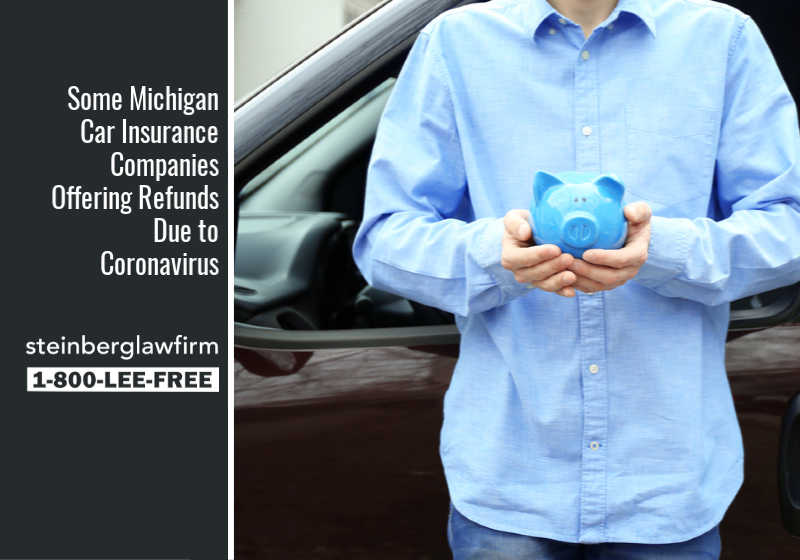 The Coronavirus has affected our daily lives in so many ways. One of the more immediate ways is how the quarantine in Michigan has forced us to spend much more time at home. This has led to the most dramatic decrease in miles driven by Michigan drivers ever.

Although the estimates vary, the number of miles driven has fallen by more than 50% compared to the same time last year, especially in the hardest hit areas of metro Detroit. With less miles driven comes less car accidents, truck accidents and motorcycle wrecks in Michigan.

Consumer groups and regulators beginning in mid- March began to ask car insurance carriers for rebates and refunds for policyholders given the huge decrease in vehicle usage and miles driven.

An early study found that the number of miles driven in Seattle, Washington, one of the first areas of the country to institute a shelter-in-place, found many motorists were driving only 20% of the miles they would normally drive. The consumer group found there was no reason customers should pay for auto insurance that assumes 1,000 miles driven per month when in fact an individual was only driving 200 miles per month, or even less.

In metro Detroit, the number of miles driven in Wayne, Oakland and Macomb counties has decreased more than 70%!

Behind the scenes the pressure began to amount as insurance carriers felt increasing pressure from both consumer advocates and state governments looking to provide their residents with relief. Then in late March and the first week of April, car insurance carriers began to publicly announce refunds and rebates to customers.

Below is a list of some of national car insurance carriers and the rebates they have announced to the public so far.

Typically, in almost all instances auto insurance for a personal vehicle does not provide coverage for “business use,” such as delivering food for a fee. Usually, an individual in this situation has to pay an additional fee for this coverage. However, many auto carriers in Michigan are waiving this and allowing individuals to deliver food and medicine without having to purchase additional coverage.

Some carriers are also extending the number of days they will reimburse a customer for a rental car if the policyholder or insured’s vehicle is in a repair shop and cannot be repaired or returned.

Still, these rebates and refund amounts may not be enough. Is a 15% refund really enough to offset charges when the amount of claims have decreased by 50% or more? Shouldn’t the amount of the rebates be higher?  It is important that the Michigan Commissioner of Insurance, Anita Fox, and her staff stay vigilant to ensure auto insurance premiums are fair and not excessive. Michigan motorists pay tens of millions  of dollars for auto insurance and we shouldn’t have to pay for something that is not being used.

All these refunds come at the same time that our state’s auto no-fault system changes this July with the introduction of PIP choice. PIP, or personal injury protection, covers the medical expenses, lost wages and other benefits for individuals injured in a car or truck accident.

Beginning on July 2, 2020, motorists will be able to be able to select the amount of no-fault PIP coverage they want.

Currently the amount of PIP coverage available is unlimited. But under the new no-fault automobile law, people can choose to purchase only $250,000 in no-fault coverage. Limits increase from there with $500,000 coverage or unlimited coverage also offered. Individuals on Medicaid who are eligible may choose coverage for as low as $50,000. Medicare beneficiaries and individuals with private health insurance that covers auto accident expenses may choose to opt-out of PIP coverage all together.

These different plans are aimed to decrease the total cost of Michigan car insurance, although it is unclear how much savings will actually occur.

If you’re in an accident right now, obviously you still need to contact the police. The police need to come and make a report. It’s still vitally important to get a report done at the scene and not later. You need to, if you can, exchange information in some fashion with the other person who was involved in the accident or whoever … If it was one car or three cars. I would write down the license plate number of every car involved. I would get as much information, even if you’re just writing it down, your own pen and your own pad in your car, stay six feet away but at least exchange name, phone number and get the license plate number and wait for the police to arrive.

I would also take photographs while you were at the scene on your cell phone of your car and the other car just to memorialize what was going on at the time. It’s difficult. We’re still taking cases. Just today, I’ve had a couple people who have called me who were involved in recent car accidents and it’s tough because they needed to go to the ER, but couldn’t. The ER literally would not take them. It’s going to be extremely frustrating right now. We’re working to see if we can help these people out and get some direction through their own family doctors or through another facility so they can at least get checked out and put into some type of program, whether it’s at home or somewhere, so they can at least get some treatment for their injuries.

It’s very frustrating right now, but we’re still taking claims. We’re working really hard here, but it’s really important while you’re at the accident scene to still get as much information as you can and to absolutely get the police there and a report filed.