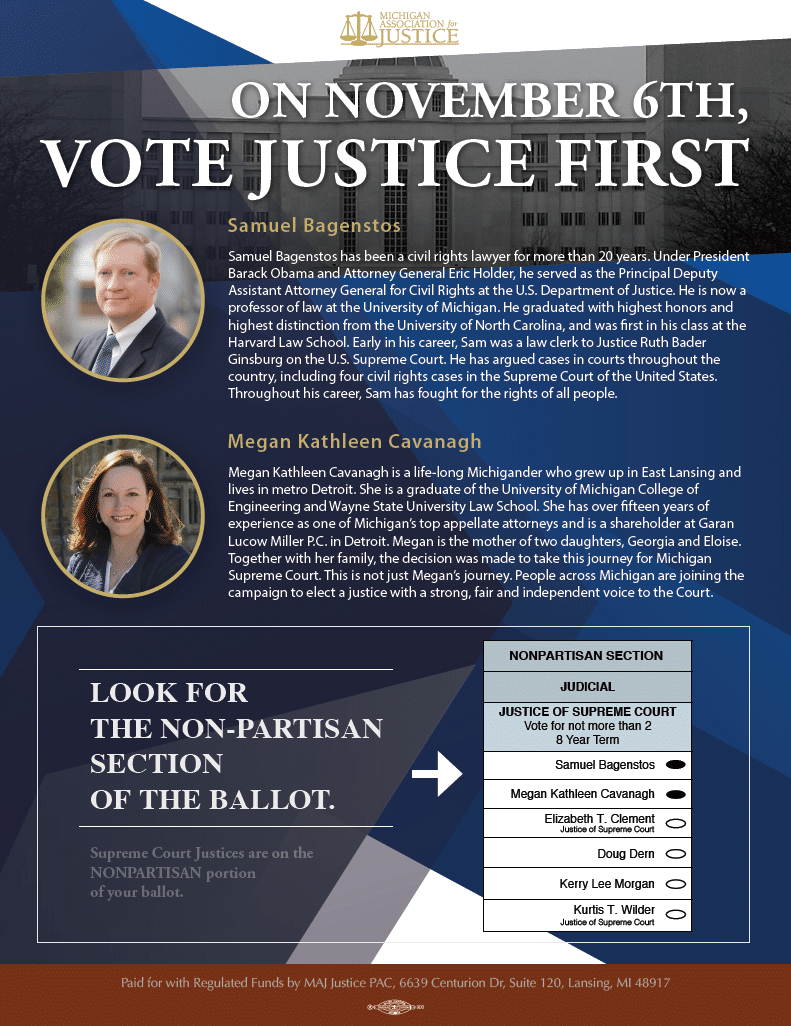 This Tuesday, Michigan residents go to the polls to vote on a number of positions and proposals. The election during this mid-term season includes selecting a new governor, new Attorney General, new Secretary of State, as we well as choosing our state legislators.

In addition, Michigan residents will also choose two candidates for the Michigan Supreme Court. We are proud to endorse both Megan Kathleen Cavanagh as well as Sam Bagenstos for Michigan’s highest Court.

Michigan Supreme Court justices are selected on the non-partisan section of the ballot. So please look carefully for this section and this race when you are voting. Justices are given 8-year terms and they hold an incredible amount of power. This year you will be asked to choose two individuals from a list of eight candidates.

We urge you to select both Cavanagh and Bagenstos.

Megan Cavanagh has been an appellate attorney for an insurance defense firm for over 15 years. Although our law firm battles with many of the clients she represents, we believe she has the right judicial temperament and outlook to be a great addition to our state Supreme Court. She understands the civil justice system is the best chance of injured people to obtain the justice and compensation they deserve. She also understands how slanted our state’s courts have been for the insurance industry over the past 20 years. She is a strong and independent voice and would serve our state’s citizens well.

Sam Bagenstos has been a civil right lawyer for more than 20 years. He is currently a law professor at the University of Michigan School of Law. He clerked for current Supreme Court Justice Ruth Bader Ginsburg and has argued cases in courts throughout the country, including the U.S. Supreme Court. He has spent his entire career fighting for individuals and their families who have been wronged by the big and powerful.

On November 6, please vote for Cavanagh and Bagenstos for Michigan Supreme Court in the non-partisan section of your ballot.