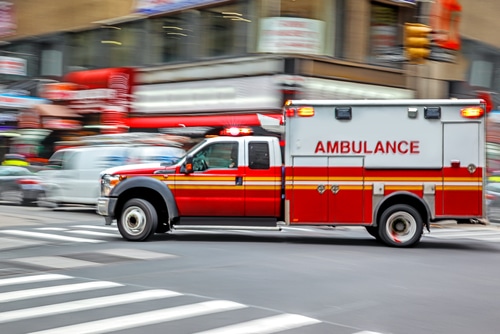 Getting involved in an accident with uninsured vehicle, or a hit-and-run car, is all too common here in Michigan. In fact, by some estimates more than 25% of vehicles operated in certain sections of the state are uninsured. Still, even when hit and injured by an uninsured car, you can still obtain compensation.

However, it often all depends on what the insurance policy says.

This was especially true in a case the Michigan Court of Appeals ruled on last month. In Drouillard v. American Alternative Ins. Co. (AAIC), a white pickup truck driving in St. Clair County darted across a street in front of an ambulance, causing building materials to fall from the pickup truck onto the street. A few seconds later, the ambulance came upon the building materials laying on the street, causing a passenger in the ambulance to sustain injury.

“That is a hit-and-run vehicle and neither the driver nor owner can be identified. The vehicle must hit, or cause an object to hit, an “insured,” a covered “auto” or a vehicle an “insured” is “occupying”. If there is no direct physical conduction with the hit-and-run vehicle, the facts of the “accident” must be corroborated by competent evidence …”

The plaintiff filed suit against defendant AAIC, seeking UM benefits pursuant to the insurance policy. In the trial court, AAIC moved to dismiss the case, arguing there was no “uninsured motor vehicle” involved in the accident as defined by defendant’s policy. The trial court denied the defendant’s motion, allowing the plaintiff’s case to move forward. The defendant appealed.

The Michigan Court of Appeals, in a decision this author finds puzzling, reversed the trial court’s ruling and dismissed the plaintiff’s case. In reaching this decision, the 2 of the 3 judges on the Court of Appeals panel ruled in favor of the insurance company.

The panel carefully parsed the definition of “uninsured motorist vehicle” found in the AAIC policy. According to their interpretation, the language of the insurance policy only provides coverage if the pickup truck caused an object to hit the insured ambulance. Because in this case the ambulance struck the pile of building materials, rather than the building material striking the ambulance, the plaintiff failed to meet the standards set forth in the AAIC policy, and therefore was not entitled to compensation.

In making this ruling, the panel differentiated the facts of this case from prior Michigan case law that sided with the plaintiff in an almost identical situation. In a prior case, a plaintiff was injured when the vehicle he occupied came across a ladder lying on the road that was left by an unidentified vehicle. In that case, the Michigan Court of Appeals ruled for the plaintiff. However, in this case, despite the fact the insurance contract language was almost exactly the same as the previous case, the panel found for the defendant insurance company.

This decision did have one dissenting judge. In his dissent, the judge expanded on prior Michigan case law on this issue. It was his belief that based on this binding precedent, the plaintiff was entitled to uninsured motorist coverage. After all, there was evidence the building materials in the road “hit” the ambulance when the ambulance drove over them. Because of this hit, there was an “uninsured motor vehicle”, as defined in the policy, and therefore coverage

This decision demonstrates a few important things. First, every case is different and sometimes you win or lose based simply on the judge you draw. Second, many judges on our state’s Court of Appeals draw inferences in favor of defendant insurance companies, no matter the underlying facts. And last, contract language matters. Every word is important and the way polices are written should be analyzed closely by attorneys working on behalf of their clients.

The Lee Steinberg Law Firm aggressively pursues uninsured motorist cases for our clients. Please call us at 1-800-LEE-FREE if you have any questions or concerns. Even if you are injured by unidentified car, we can help.