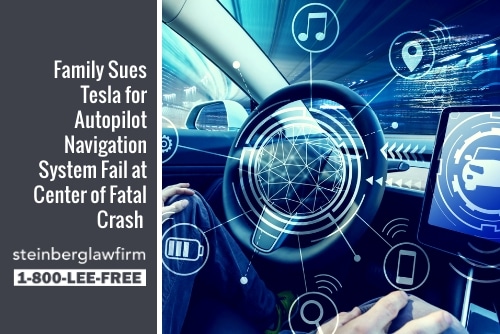 Through a California state court complaint filed April 26, 2019, Tesla Inc. is being sued by the family of Walter Huang, the 38-year-old husband and father who died as the result of a highway crash allegedly caused by a fail in the Autopilot navigation system.

In the complaint, the family says the Palo Alto-based electric car maker sold the 2017 Model X as a “state-of-the-art” automobile but lacked basic safety features commonly found on much less expensive motor vehicles used by everyday consumers, such as an automatic emergency braking system. The family also made remarks through the complaint that the company knew, or should have known, “that the Tesla Model X was likely to cause injury to its occupants by leaving travel lanes and striking fixed objects when used in a reasonably foreseeable manner,” and that the “carmaker should have issued a recall or provided a warning “in light of the risk of harm.” The complaint also revealed sentiments that the company is “beta testing its Autopilot software on live drivers.”

The State of California Department of Transportation was also listed as a defendant on the claim. It is believed the state did not repair a crash attenuator before the fatal Tesla incident.

Days after the crash, Tesla responded on its blog with, “Tesla Autopilot does not prevent all accidents – such a standard would be impossible – but it makes them much less likely to occur.”

Using data pulled from the Model X, National Highway Traffic Safety Administration (NHTSA) investigators released a report outlining the steps the vehicle made leading up to the fatal accident.

Questioning the Safety of Autonomous Vehicles and Accident Liability

The Insurance Institute for Highway Safety (IIHS), as well as several Michigan lawmakers, have called out autonomous carmakers like Tesla and the National Highway Traffic Safety Administration (NHTSA) for its lack of testing and research on the safety challenges presented through autonomous vehicle growth. Concerns over weak state regulations and accident liability for autonomous vehicles to share the roads with all motorists, bicyclists and pedestrians regularly makes headlines as the Great Lakes State with a historical foundation in auto making has shown great interest and investments in new car technologies.

Michigan’s interests in self-driving vehicles and autonomous features like Tesla’s autopilot system raises several questions about the lack of standards set into place as these motor vehicles hit the streets today. Yes, they may be aimed to create a reduction in traffic accidents, but what happens if innovation trumps safety and regulations are lacking when an accident occurs – where will that liability shift to and what will the law be to support an injured or deceased victim? Will the fault stay with a driver or move to the car manufacturer or the author of the new technology?

We look forward to continuing this conversation as automated driving is well on its way to take control of our roadways in the future. Stay connected and share your thoughts with us.

We Hold Driver Safety to A Higher Standard Than Most

The Lee Steinberg Law Firm, P.C. was founded by nationally recognized attorney Lee Steinberg in 1973. Beginning with a small office in northwest Detroit, Lee has grown his practice into a prosperous and successful law firm with offices throughout the State of Michigan.

If you have been involved in a self-driving vehicle auto accident of any kind or in-vehicle technologies have failed you, protect your legal rights and contact Lee Free at 1-800-LEE-FREE (1-800-533-3733) today for a free consultation. We look forward to answering your questions and working hard for you.