Should Michigan Test for Marijuana Impaired Drivers?
Skip to content 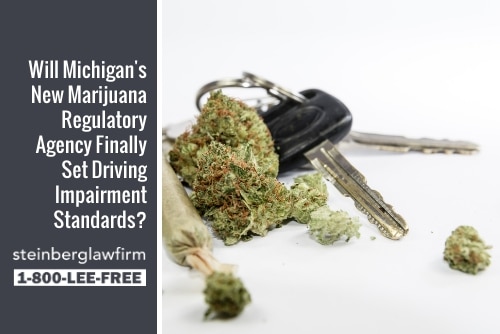 How law enforcement is going to regulate marijuana use, both medicinal and recreational, especially on our state’s roadways, has been an issue for Michigan lawmakers to address since 2008 when medicinal marijuana become legal in the state. Several pieces of legislation and pilot programs have been introduced over the years to detect THC in alleged impaired drivers through road-side saliva testing and collecting blood or urine samples. Now that marijuana for recreational use is legal and Gov. Gretchen Whitmer has established the Marijuana Regulatory Agency (MRA) within the Department of Licensing and Regulatory Affairs (LARA) to more efficiently regulate the drug’s use, common standards for law enforcement to use when testing a driver suspected to be under the influence of marijuana and operating impaired must be set.

A Michigan state commission group recently suggested that the science behind marijuana use, technology and testing needs to catch up to legalization regulations before THC’s true impairment levels can be tested accurately to determine a driver’s impairment. The recommendation was made in a March 2019 report from the state’s Impaired Driving Safety Commission and suggests lawmakers not set a marijuana mark to define drugged driving, parallel to the .08 blood alcohol content threshold for drunk driving because each person’s body processes THC and marijuana differently than booze.

The group also recommends that if police suspect drivers are high, officers should use their own discretion and perform the same roadside tests as for drunk drivers, an act which can come with its own questionable outcomes. Only 20 percent of Michigan police have advanced training in detecting whether drivers have taken drugs and drug and alcohol combinations.

More work needs to be done to evaluate how drivers can be tested before a full understanding of how to validate a crash caused by a marijuana-impaired operator. Even the National Highway Traffic Safety Administration (NHTSA) and almost every qualified researcher that studies this issue have publicly noted that there are concerns with current marijuana-impaired driving information. Tests using a driver’s saliva or blood can pick up traces even if the person is not impaired at the time of a crash. The driver responsible for a crash may have used marijuana the day before the accident and the tests could still show THC to be positive in their system.

As mentioned earlier, determining a legal marijuana threshold is also tough because:

Research findings published in the 2015 “Traffic Safety Facts: Drug and Alcohol Crash Risk” report, the NHTSA notes that drivers high on pot could have distorted critical driving skills such as reaction time, judgment, anticipation and attention.

Impaired driving as the result of any drug use is going to put all drivers, passengers, pedestrians and other road users at a higher risk for being involved in a fatal accident or traumatic injury. Everyone who uses marijuana can take steps to reduce the amount of risks to others while traveling Michigan roads. The Lee Steinberg Law Firm offers these six impaired driving tips to keep you and others safe.

Michigan is a zero-tolerance state, meaning drivers can be prosecuted for any amount of cocaine or Schedule 1 drug in their system except for those individuals who hold a medical marijuana card.

The attorneys and staff at the Lee Steinberg Law Firm understand that marijuana impaired driving cases can be difficult to process. We hope if you are involved in an accident involving a drugged driver that you will call us for help. Our motor vehicle accident lawyers will be ready to support you in your time of need and healing, and we can help decrease the financial pressures on your family by aggressively collecting the evidence needed to pursue a claim on your behalf.

Contact one of our experienced Michigan injury lawyers today to get started with your FREE consultation: 1-800-LEE-FREE.