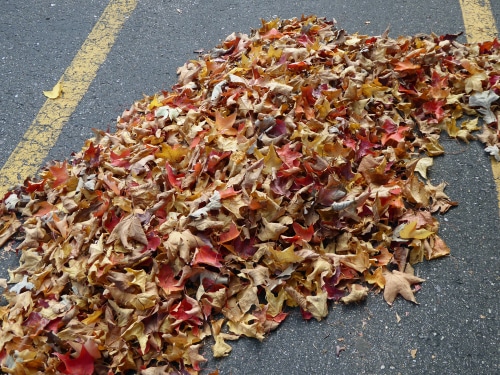 Two more slip and fall cases were ruled upon by the Michigan Court of Appeals a few weeks ago. Each involved somewhat similar events, but the Court diverged in their rulings.

Case #1 – For the Plaintiff

In Atlas v. Michigan Commercial Real Estate, LLC, (docket no 339988, unpublished, 7/24/2018) a man was walking near a parking lot when he fell through a hole that was covered by leaves. It turns out the hole was approximately 12 inches deep. The man sustained injuries from the fall and filed a lawsuit against the landowner responsible for making sure the parking lot area was safe.

The trial court in Kalamazoo County dismissed the plaintiff’s lawsuit, citing the open and obvious rule. According to the trial judge, the plaintiff should have been aware of the “possibility of the existence of a hidden danger underneath the leaves.”

The plaintiff appealed this ruling and the Court of Appeals reversed, allowing the plaintiff to go forward with his case. In making this ruling, the Court explored the original definition of the “open and obvious” rule, which says a landowner owes no duty to protect or warn of dangers that are open and obvious because such dangers, by their nature, apprise an invitee of the potential hazard.

In deciding whether a danger is open and obvious, it depends on whether it is reasonable to expect that an average person with ordinary intelligence would have discovered it upon casual inspection.

In looking at the facts of the case, the Court found there was a question of fact as to whether a reasonable person would have discovered the hole on casual inspection given the surrounding conditions on plaintiff’s property. The plaintiff testified that all he saw while walking was leaves and grass and he never saw or noticed a hole. Other witnesses and photographs of the scene showed the hole completely covered by leaves. There was no indication a hole existed below the leaves.

Given these details, the Court did not find the condition open and obvious and allowed the plaintiff to proceed with his case.

Case #2 – Against the Plaintiff

But what the Court giveth with one hand, the Court taketh with the other. On the same day, the Court issued a decision in Kanouna v. SLM Windmill Limited Partnership (docket no. 337897, unpublished 7/24/2018).

In that his case, a Macomb County woman slipped and fell while walking to her car which was parked in the parking lot of defendant’s plaza. It was raining that day and plaintiff walked through what she thought was a shallow puddle with solid, smooth blacktop beneath it. However, when she stepped through the puddle there was a crack or indentation in the pavement, causing her to fall.

The defendant filed a motion to dismiss the case, arguing the puddle and the pavement was open and obvious. The trial court agreed, and dismissed the case. The plaintiff appealed, but this time the Court of Appeals affirmed the lower court’s ruling.

The Court said that an average person with ordinary intelligence would have known that rain puddle in a parking lot could conceal such dangers such as crack and indentations in the underlying concrete. In addition, the court said the fact there was a puddle should have made the plaintiff aware that there was an uneven surface that caused the water to puddle.

These cases highlight the difficulties in Michigan premises law. So often the ability for a defendant to escape all liability stems from even the most minute details. Every fact counts.

If you or a loved one has been injured in a Michigan slip and fall case, please call our office at 1-800-533-3733 (1-800-LEE-FREE). Our team of Michigan trip and fall attorneys can answer your questions and determine whether you have a case or not. The phone call is free and we don’t get paid unless you win.