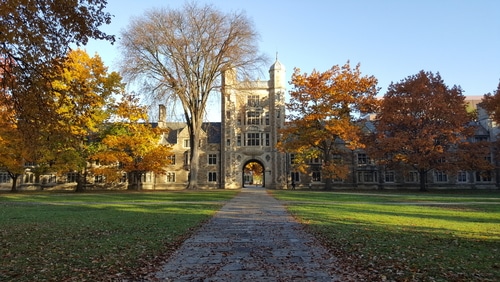 The recent onslaught of Michigan’s winter snowfall may have triggered a crash between a University of Michigan public transportation bus and a tree at 1100 Block Fuller Road, according to the University of Michigan Police Department. About 20 passengers, a mix of students, faculty and hospital workers were on the bus while traveling between the Central Campus Transit Center, Bursley Hall and Vera Baits Houses on North Campus. Passengers shared their accounts of the crash scene in their social media spaces by updating posts with photos and reports that the accident caused them to fall out of seats and onto the bus floor, be pushed into other riders and on top of nearby seats and into windows. Others described the massive bus spinning into opposite traffic and being frightened by it traveling into the direction of oncoming traffic. The cracked windshield left many questioning their own safety on future public transportation rides. At this time there are no serious injuries reported.

Transit Riders Can Be Seriously Injured

Some mass transit vehicles are also called common carriers and include public buses, taxis, trolleys, and trains. There are factors involved as to why riders of these vehicles may be seriously injured in an accident including greater risk of tip-over or roll-over. Mass transportation users are also at risk due to the absence of safety features like airbags or seatbelts. In essence, there is nothing to secure them in the case of collision or impact.

Transit riders involved in accidents often sustain very serious injuries which require extensive medical treatment and rehabilitation. Among the most common of these injuries include:

Once involved in a bus accident as a rider, it is important to make the time to collect your accident notes and locate the bus number, bus driver’s name, and take photos or video of the scene and of where you were sitting. Be sure to seek help from a medical doctor to ensure your body is moving and your mind is operating the way it should. Injuries don’t always present immediately and may show up days later. Keep your medical record and doctors’ notes up-to-date and speak with a personal injury lawyer if you believe there was a negligent cause behind the crash.

Common carrier law requires public transportation to provide a higher degree of care for passengers than is typically expected. The bus company, the bus driver, maintenance providers, part manufacturers, and other drivers (or even riders) may be held liable if found the cause of your injury.

Bus passengers who suffer injuries caused by a road accident may be entitled to compensation to support related medical costs, income loss, and recovery needs. Please share your story with our motor vehicle accident attorneys at 1-800-LEE-FREE (1-800-533-3733) or fill out the Free Case Evaluation Form. And remember, you pay nothing until we win or settle your car accident case.