In Michigan, Why Do I Need Uninsured Motorist Coverage?
Skip to content 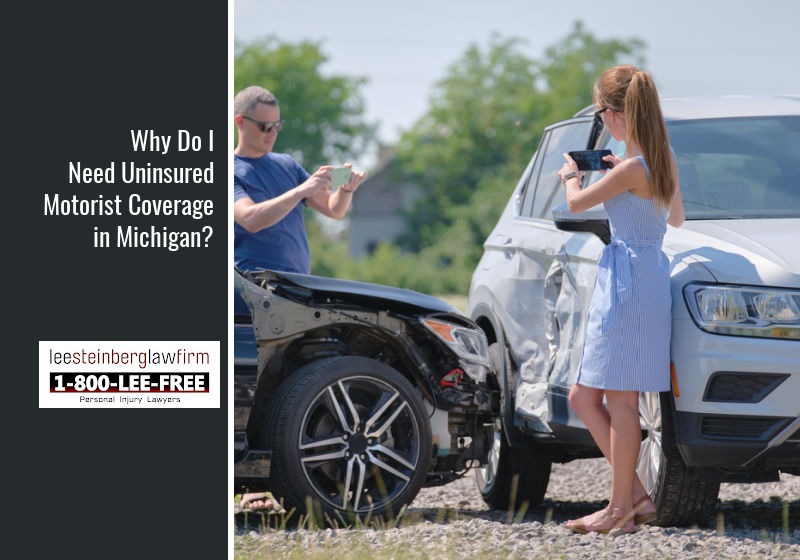 There are a number of things to consider when a car accident occurs in Michigan. One of them is insurance. It is estimated that approximately 25% of drivers on Michigan roads do not have auto insurance. If you are injured in a crash with an uninsured driver, you can turn to an uninsured car accident lawyer to help you still get compensation. This is because many insurance policies have uninsured motorist (UM) benefits, which allow policyholders and passengers to obtain compensation for medical bills and pain and suffering, even if the at-fault vehicle was not insured.

These situations are tricky. There are certain rules that a person must follow to get money from in a crash involving an uninsured driver. That it is why it very important to reach out to an attorney who specializes in uninsured car accident cases.

What is Uninsured Motorist Coverage?

Uninsured motorist coverage is a form of auto insurance that you purchase from your own auto insurance carrier that covers you if you are injured by an uninsured driver or uninsured vehicle.

Uninsured motorist coverage steps into the shoes of the uninsured vehicle. It pays out compensation for pain and suffering. In some cases, it also pays for past medical bills, future medical bills and lost wages.

UM coverage is not mandatory. It is a form of insurance that a person must request from the insurance agent or purchase themselves online.

How Many People Don’t Have Auto Insurance in Michigan?

The numbers are staggering. But in Michigan, according to the Insurance Information Institute, roughly 25% of drivers do not carry auto insurance. Michigan is the second highest uninsured state, with only Mississippi having more uninsured drivers. In many cities, like Detroit, Flint and Saginaw, the numbers are even higher. Some estimate the rate of uninsured drivers is more than 40% in some neighborhoods.

The reasons for this are multiple, but without question the biggest reason is cost. Car insurance in Michigan is expensive. We are a no-fault state. Although we receive great benefits from this insurance, it does come at a cost.

As a result, the number one reason why you need uninsured motorist coverage is to protect yourself. You can’t control who is going to hit you and cause a crash. Sometimes the at-fault driver is insured. But often they are not. And collecting money from an uninsured driver is a fool’s errand. As the saying goes, you can’t get blood from a stone. That is why it is so important to buy uninsured motorist coverage.

Stolen Cars Are Not Covered by Insurance

If you are injured by a vehicle that has been stolen, even if the stolen vehicle has insurance that insurance carrier will mostly likely deny the claim. Most insurance policies require permissive use for the driver to extend coverage. When a car is stolen, obviously the owner did not give the driver permission to use the vehicle. Because of this, the auto insurance carrier will deny it has to pay anything to any other person’s injured due to the driver of the stolen vehicle.

This is where UM coverage comes into play. In these situations, a person stuck in this situation can turn to their own insurance company for protection. If the vehicle is covered by uninsured motorist coverage, and that vehicle is struck by a stolen car, the individuals in the vehicle can still make a claim for pain and suffering compensation.

Police Officers are Not Responsible For a Police Chase Crash

In situations where there is a police chase, in almost all situations the law enforcement agency pursuing the vehicle cannot be held responsible if a crash occurs. For example, if a drunk driver decides to run from the police, and the drunk driver then runs a red light and collides with your vehicle, the drunk driver is obviously negligent. But the police force that started the pursuit is usually granted immunity. This means the officers and the department are protected from civil liability.

Just like stolen vehicles, vehicles that are taken without permission will not be covered by the insurance company if they crash into another vehicle.

For example, you are at your home with some friends watching TV. A friend decides to grab your car keys without your knowledge and drive to the store to pick up some food. While on his way, he crashes your car into another car causing severe injuries.

To put it bluntly, no. Given the high cost of car insurance in Michigan, UM coverage is actually quite inexpensive. For example, I have recently seen it cost as little as $5.00 for 6 months of coverage. That bought $100,000 in coverage.

No, it is not. This means you have to ask your insurance agent or request it yourself if buying auto insurance online. Unlike bodily injury coverage, which covers you if cause a crash, UM coverage is not mandatory under Michigan law. You do not have to purchase it. However, it is highly recommended given the huge number of uninsured vehicles traveling on Michigan roadways.

Who Does Uninsured Motorist Cover in Michigan?

Uninsured motorist coverage is a creature of contract. This means the insurance policy will always dictate who can receive UM benefits. In all situations, the policyholder or the “named insured” will have access to UM benefits following a crash. Under many policies, resident relatives of the policyholders will also be covered. For example, a child or sibling who lives with the owner of the car can access UM benefits if injured in a covered car.

From there it depends on the language of the insurance policy. Under some policies, all occupants of the vehicle at the time of the crash are covered. These individuals are covered even if they don’t have anything to do with the vehicle. In other policies, only the named insured and specific people are covered.

Again, it varies by the insurance policy. That is why it’s vital to contact a Michigan car accident lawyer after a crash with a car without insurance to find out your rights as soon as possible.

Is There a Time Limit for Uninsured Motorists Claims?

Yes. Under Michigan law in most situations UM claims must be filed in court against the insurance company within 3 years of the auto accident. This is the statute of limitations for a standard auto negligence claim in Michigan. And insurance policies must conform to the law in Michigan.

The car accident attorneys and legal professionals at the Lee Steinberg Law Firm represent injury victims throughout Michigan. We only handle personal injury cases. We have specifically handled hundreds of uninsured motorist claims and know everything about them.