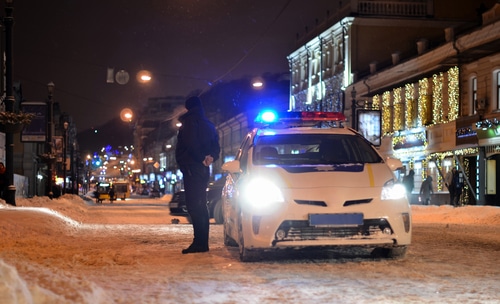 In Troy, the trooper was responding to the driver of a 1999 Mercury that was blocking traffic. According to the report, “Before the trooper exited his vehicle to check on the stalled driver, a GMC Terrain failed to stop and side-swiped the trooper’s vehicle.” In addition, the vehicle was then side-swiped on the passenger side by another GMC. The trooper was transported to a local hospital. Thankfully, his injuries were not serious. Southbound I-75 at Adams Road was closed for several hours due to the accident.

In a separate incident on February 10th, another MSP vehicle was struck from behind on southbound M-10 at Meyers in Detroit. Again, the trooper was outside the vehicle at the time of the crash but was able to leave without serious injury.

MSP reported more than 32 spin-out crashes in the district this same evening. Winter weather and sketchy stretches of slick roadway lined with stalled vehicles are believed to be the causes of both crashes.

It’s not uncommon for a vehicle to spin-out or slide toward the direction of stopped or oncoming traffic when winter weather presents amongst unruly road conditions. But those who do not operate cautiously to begin with are the ones putting most other drivers at risk, including police officers or emergency responders who may be stopped on the side of a freeway, assisting troubled motorists. Speeding, driving while distracted, and operating under the influence of drugs and alcohol, remain several of the top negligent causes that contribute to secondary accidents.

There are many steps drivers can take to minimize the likelihood of being involved in a car accident with a stopped vehicle, even when road conditions are not ideal:

Although safe driving should be a year-round habit, winter driving demands special care and attention. Putting all of this information into good practice and sharing it with others are easy steps anyone can take towards reducing their risk of being involved in a tragic accident.

Contact Us Now About Your Winter Car or Truck Accident Injury

Working with insurance companies to ensure you get the compensation you deserve can be frustrating and confusing, especially if you were hit by an oncoming driver and became injured while assisting others. We can help. Please call Lee Free and speak to our motor vehicle accident injury attorneys at 1-800-LEE-FREE (1-800-533-3733) or fill out the Free Case Evaluation Form. And remember, you pay nothing until we settle your accident case.