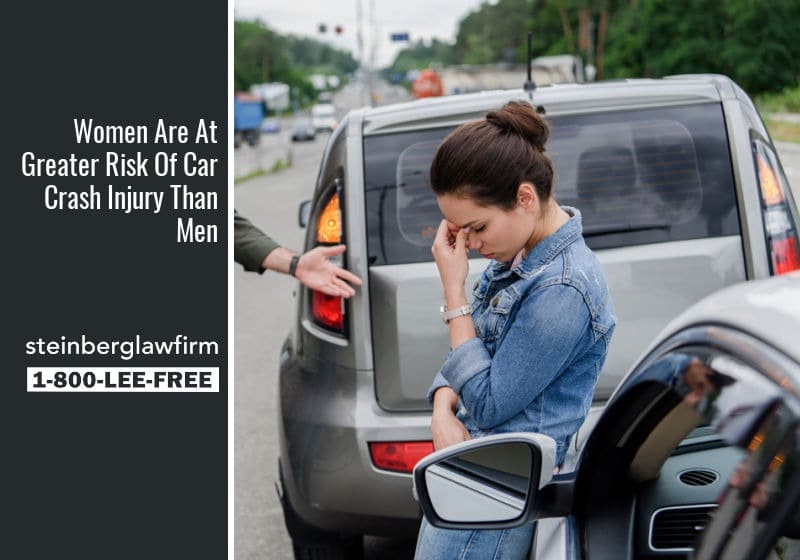 Women are as much as 28% more likely to be killed in a motor vehicle accident and up to 73% percent more likely to be seriously injured. The alarming data sent researchers from the Insurance Institute for Highway Safety (IHHS) to analyze men and women’s injuries in police-reported tow-away front and side crashes from 1998 to 2015. The research group supported by auto insurers looked into whether there was some sort of gender bias in motor vehicle crash risks or whether body type had anything to do with the injuries.

When studying crashes involving men and women in similar-size vehicles, the report says, “women were still twice as likely to be moderately injured and a bit more likely to be seriously hurt.” In particular, women are 2.5 times more likely to suffer moderate leg injuries. Men were also more likely to be driving the striking vehicle.

Similar studies from the National Highway Traffic Safety Administration have shown that a female driver or front passenger (even if wearing her seat belt) is 17% more likely than a male to be killed when a car crash occurs.

Our legal team of personal injury lawyers specializes in representing all car accident injury victims, helping them obtain the benefits they deserve, and putting the pieces back together. We work hard to lead an investigation, including taking witness statements, gather medical information, and meet with experts to solidify the negligence of the at-fault driver. Our experienced team of Michigan car accident lawyers will take only your best interests into professional and thoughtful care to present your best case. Here is a sampling of the injured Michigan women we have represented and won settlements for over the last few years.

For many women, taking care of their health is essential because they need to be well enough to help take care of everyone else, says the Kaiser Family Foundation. But sometimes, women aren’t able to get help for their injuries as quickly as they would like. Under Michigan law, a person has three years from the accident date to file a lawsuit. Once the three years have passed, the plaintiff cannot file the case against the defendant. When a lawsuit is filed, the statute of limitations is tolled or stopped. There are some exceptions to this three-year statute of limitations rule, so it always best to speak to a Michigan car accident attorney to learn about your legal options.

Do You Need to Talk to a Michigan Lawyer About Your Car Accident?

Our highest satisfaction comes from winning or settling a case and knowing our clients’ can rest more comfortably when their medical care, lost wages, and other expenses and family are being taken care of. If you’ve been involved in an accident in Michigan, contact us today for your FREE consultation or call us at 1-800-LEE-FREE. We can be there right to help alleviate your accident stressors and guide you to a winning settlement.