We Have the Answers! Myths and Facts About Drunk Driving | Michigan
Skip to content 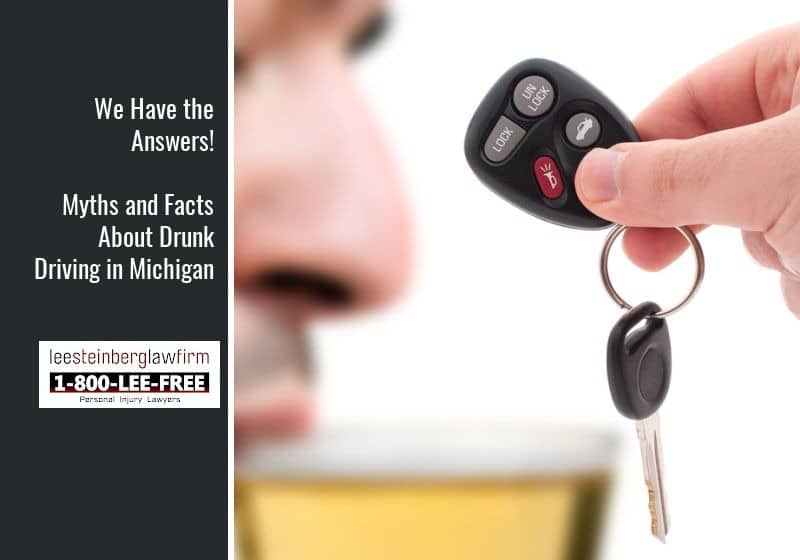 Driving myths and rumors can be harmful and result in severe consequences. Unfortunately, myths surrounding drunk driving are quite common in Michigan. Though these rumors are often spread with good intentions and are meant to help drivers if they get caught while driving under the influence, they are often false and can make the situation even worse than it was to begin with.

When someone gives you a tip or trick related to drunk driving, the best thing you can do is do your own research to verify if what they are saying is true. Even then, driving while intoxicated is a serious offense, and your best course of action is to avoid it in the first place.

Still, many drivers continue to get pulled over and arrested for DUIs and OWIs every year. If you are injured by another driver who was intoxicated, a drunk driving attorney can help you seek justice and get the compensation you deserve.

Let’s take a look at some of the most common drunk driving myths in Michigan—it’s always best to know the facts and be prepared should you ever find yourself in these situations.

Myth: I will not be charged if I test below the legal blood alcohol limit.

FACT: You can still get charged if there is any amount of alcohol in your system. Drivers can be held liable for causing an accident due to negligent driving, and driving while intoxicated is considered a negligent action. Even if you test below the limit, you can still face charges if the court determines you were the one at fault for causing the accident. The charges might not be as severe depending on how much alcohol is in your system, but you can still get charged.

Myth: Refusing a breathalyzer test is in your best interest.

FACT: Some people think that by refusing a breathalyzer test you are helping your case by limiting the evidence that can be used against you, but this is untrue. Refusing a breathalyzer test just makes you look more suspicious, and you can be charged with a civil infraction that can carry up to a $150 fine. Furthermore, if you refuse to use a breathalyzer, the officer can obtain a warrant for a blood test, which is more accurate and can be used as evidence in court.

Myth: If I am charged with a DUI, I can have it expunged, especially if it was my first conviction.

FACT:  Michigan traffic offenses, including DUIs or OWIs, cannot be expunged. If it is your first offense, the officer who pulled you over could let you go, but this is highly unlikely and not something you should count on. If the officer does charge you and you are convicted, there is no way to have the record erased. The court could decide to reduce your penalties if this was your first time, but the charge on your record will remain.

Myth: I won’t be charged if my intoxication was the result of prescription medication.

FACT: Impaired driving, whether it is from alcohol, drugs, over-the-counter medicine, or prescription medicine, can result in a DUI/OWI charge. Taking any substance that impairs your ability to function and drive is viewed as a negligent act. Even if your doctor prescribed the medication, if it has side effects that can impair your driving, you can face charges if you cause an accident as a result.

Myth: If I delay taking a test, it will give me time for my BAC to go down.

FACT: A breathalyzer test taken at the scene will yield a higher blood alcohol content (BAC), which makes it seem like it’s smarter to wait. However, this line of thinking won’t do you any good. Though a chemical test order hours later will shower a lower BAC, it can still be used against you.

Chemical tests are considered more accurate anyways and are what the courts rely upon for evidence in DUI cases. Specialists will simply use the results to make an educated guess on what your BAC would have been at the time of the accident. So either way, if you test at the scene or hours later, you will likely still be charged.

When it comes to drunk driving, the best course of action is to avoid doing it in the first place. Drunk driving accidents can have severe consequences, and if you injure or kill someone, your charges will be increased and you will likely face jail time.

If you have questions or concerns about a drunk driving incident or were injured yourself by a drunk driver, the Lee Steinberg Law Firm can help. For over 40 years, our team has been helping victims of drunk driving accidents prove fault and get the compensation they deserve.