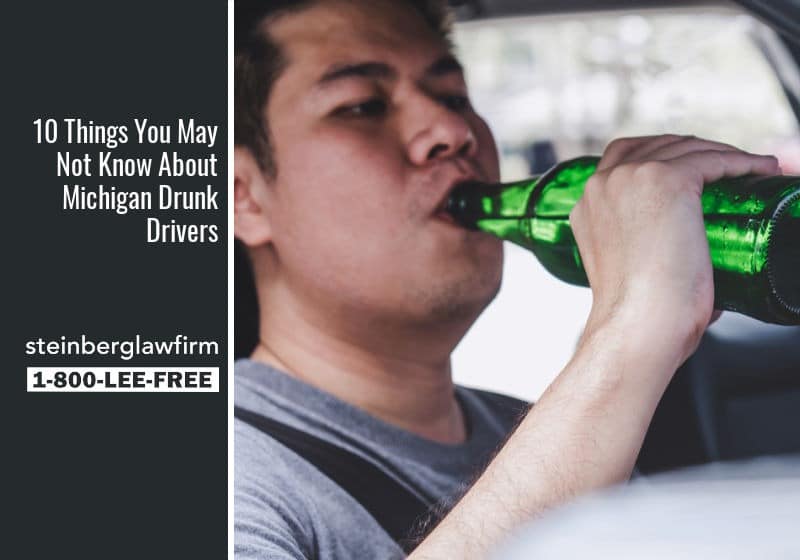 10 Things You May Not Know About Drunk Driving in Michigan

Drunk driving remains a serious issue in Michigan and the cause behind thousands of 100% preventable accident injuries and motor vehicle deaths each year. According to Michigan State Police numbers, of the 902 fatal crashes in Michigan in 2019, 164 involved drinking, 112 involved drugs, and 102 involved a mix of drinking and drugs. To help you understand the growing severity of the problem, here is a list of ten facts our Michigan drunk driving attorneys at Lee Steinberg Law Firm have gathered for review.

And remember, according to Michigan State Police, drivers with any amount of a Schedule 1 controlled substance will be subject to the same fines and penalties as drunk drivers, even if they show no signs of impairment. The only exception is an individual who has a valid medical marijuana card.

Holding a Michigan Drunk Driver Accountable for Causing Your Injuries

We are sorry to hear about your Michigan car or truck crash, and our lawyers know just how scary a drunk driving accident can be. Unfortunately, just because you were not at fault does not mean you are automatically entitled to compensation. To make a claim and demonstrate a severe impairment, you must show the car accident caused injuries and documented disruptions, including physical, emotional, and financial damages. These impairments have likely changed your ability to lead an everyday life, such as taking care of your family and going to work.

To begin receiving the help you need, call an experienced Michigan drunk driving lawyer specializing in personal injury. The support team at The Lee Steinberg Law Firm, P.C. knows how to find crash witnesses and take statements. We are experienced in hiring accident reconstruction experts to solidify liability, can subpoena videos of the accident scene from nearby establishments or the police, and obtain the needed documentation to build your case. Besides Michigan no-fault benefits, a person injured due to a drunk driver can also claim any pain and suffering the drunk driver caused.

Bottom line, if you are going to use alcohol or drugs, don’t drive. Even after one drink, it just isn’t worth it. Here are some accessible resources in Michigan for hailing a safe and sober ride home.

You can also have a plan of how you will get home and designate a sober driver before drinking alcohol, ask a bartender for help getting a safe ride, call a friend or take the bus, or stay overnight at your location when possible.

We Can Start Working for You Today

We understand that proving another driver’s wrongdoing due to their alcohol (or drug) impairment will be a lot of work. Still, we have the required expertise in drunk driving crash investigations and remain highly successful in holding impaired and negligent drivers accountable for their actions.

If you have any questions, please call us at 1-800-LEE-FREE (1-800-533-3733). And please know we are happy to help you and be right there when you need us most. Contacting us is free, and there are no fees or costs until we win your case.Learn more from Attorney Eric Steinberg:If you’ve been hit by somebody high on marijuana, give us a call. You have an excellent negligence case.