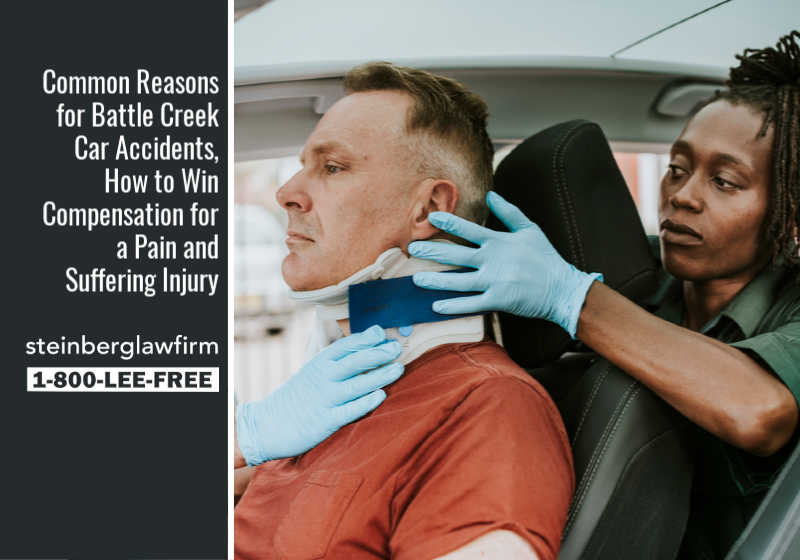 Battle Creek, Michigan, is home to a growing population of more than 51,000 according to the most recent United States census estimates. The city is located in the northwest corner of Calhoun County, wherein 2018, Michigan Traffic Crash Statistics reported nearly 4,500 car crashes, 14 motor vehicle fatalities, and 872 injuries related to those accidents.

While the crash numbers have decreased in Calhoun County since the previous year, most serious accidents in Battle Creek are still contributing to the data. A majority of these accidents are directly related to speed, alcohol, drugs, and distracted driving, and most often occur on busy highways and city streets. Depending on how severely or permanently injured a person becomes in an accident, the more pain and suffering they will experience.

Major roadways that run through Battle Creek and are responsible for severe crash accidents each year and include I-94 and major highways include M-36, M-66, M-89, and M-96. But the bulk of car accidents in Battle Creek occur in particular at busy intersections. Some of the top intersections known to be dangerous to Battle Creek drivers include:

2018 Michigan Traffic Cash Statistics also reveal that drivers, motorcyclists, bicyclists, and pedestrians are more likely to be involved in a crash on city streets like Capital Avenue, Washington Avenue, and Emmett.

In Onsted v. Lapenna, (docket no. 346355, unpublished), a motorcyclist operating his bike in Calhoun County was struck by a Ford Explorer who cut in front of him. The motorcycle operator was able to avoid a direct hit and having to “lay down” his bike. From the accident scene, he was taken to the Battle Creek VA Hospital.

He eventually developed neck and back pain and began to receive chiropractic care starting a month after the crash. After about seven months, his low back pain subsided, but his neck pain persisted. Roughly nine months after the crash, he saw a pain doctor who administered epidural steroid injections in the back of his neck. Two herniated discs in the neck were diagnosed in 2016. In May 2017, he was involved in another accident, this time losing his left leg at the knee due to the injuries sustained while riding his motorcycle.

The motorcyclist filed a lawsuit against the at-fault driver in Calhoun County court related to the first crash. The lawsuit asked for pain and suffering compensation. A jury trial awarded the plaintiff money damages, and the defendant appealed.

The defendant’s main argument is that the motorcyclist did not sustain a “threshold injury” under the Michigan no-fault law, and as a result, was not entitled to monetary compensation for his injuries. Under Michigan car law, a person is entitled to non-economic damages, such as pain and suffering, if they can show a “serious impairment of body function.” In other words, the plaintiff must show that the motorcycle crash affected his general ability to lead his normal life.

During discovery and at trial, the plaintiff testified he had to take sick leave and fight through the pain in his back, neck, and shoulder. Although he did not miss any time from work, he struggled to complete tasks such as painting and cleaning ceiling tiles. He was also unable to attend the Michigan Bikers Helping Veterans ride, which he previously did before the crash. The plaintiff’s wife testified her husband was unable to do the household chores for a time following the accident as well as regular handyman chores.

Based on this evidence, the Court of Appeals upheld the jury award. The judges believed there was enough evidence to show the plaintiff did sustain a threshold injury, and it was up to a jury to decide the issue.

Providing Proof to Seek Compensation After Being Injured in a Crash

Once involved in a motor vehicle accident in Michigan, individuals may seek to obtain compensation related to their accident injuries. This compensation includes payment for pain and suffering, reimbursement of lost wages, the payment of medical expenses and doctors bill, as well as other benefits. But first, to receive compensation, several things must be proven.

However, under Michigan law, you must also prove a “threshold injury,” or demonstrate the car accident (in general) affected your ability to lead a normal life. This last hurdle is often the most important in obtaining pain and suffering compensation following a car or truck accident, and typically when a personal injury attorney can be beneficial in supporting your claim.

We are here to assist you with your car, truck, or motorcycle accident case. Our dedicated team of Calhoun County car accident lawyers aggressively fight the insurance companies to win our client’s cases. The attorneys at the Lee Steinberg Law Firm, P.C. at 1-800-LEE-FREE (1-800-533-3733) are working at one of Michigan’s largest personal injury firms with the best results. An initial consultation is free, and there is no fee unless win your case.

Also read: Where and When Michigan Motorcycle Crashes Happen Most Often