Since drivers of all ages are increasingly ignoring responsibilities behind the wheel and playing the role of distracted motorist quite well these days, the National Highway Traffic Safety Administration (NHTSA) has named April as National Distracted Driving Awareness month. Distracted driving is any activity that takes away someone’s attention from driving. Driving distractions kills eight people and injures more than 1,000 every day according to the NHTSA and usually happens in one of three ways.

Police and safety officials say more drivers are carrying on conversations using cell phones and checking or sending text messages than ever before. Texting while driving is especially dangerous because it combines all three types of distraction and increases an operator’s likelihood of being involved in a motor vehicle crash, endangering themselves and others.

Texting is the No. 1 Distracted Driver Concern

In 2016, AAA conducted a distracted driving survey in Michigan. It showed that nearly 95 percent of the Michigan residents polled said texting while driving was their number one concern when asked about driving distractions. This response was alarming since more than a third of drivers admit to reading text messages while operating a passenger motor vehicle. While it may only take a driver’s eyes off the roadway for a couple of seconds, sending or reading a text at 55mph, is comparable to driving down the length of a football field blindfolded. The texting while driving concern was followed closely with operating a motor vehicle when tired (94%), grooming (87%) and talking on a hand-held cell phone (63%). These statistics are similar in most states across the nation and show cause for the text messaging ban currently in place for all drivers in 46 states, Michigan included.

Under Michigan’s anti-texting law (sec. 257.602.b) a driver shall not “read, manually type, or send a text message on a wireless 2-way communication device that is located in the person’s hand or in the person’s lap, including a wireless telephone used in cellular telephone service or personal communication service, while operating a motor vehicle that is moving on a highway or street in this state.” 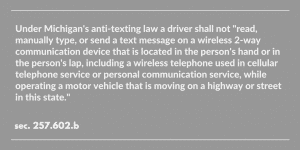 Exceptions to the texting law include drivers who:

Violating Michigan’s texting while driving laws can be costly. Operators can be charged with careless driving and face paying hefty fees if a distracted driver using a cell phone causes a wreck or commits a traffic violation. Drivers are also putting themselves and others at risk for serious injury or even a motor vehicle fatality.

While it is helpful to have the texting ban in place, there is currently no prohibition on cell phone use while driving in Michigan excluding the city of Detroit since localities can determine local cell-phone driving laws. Even without a law in place, it is still not safe to be using a mobile device while driving and wise for drivers to refrain. According to the National Safety Council, talking on a cell phone (even hands-free) give a driver a slower reaction time than if they were driving at or above the legal blood alcohol limit.

Teens and Parents Can Become Better Drivers Together

Distraction is a factor in nearly six out of ten moderate-to-severe teen crashes, creating an enormous potential for motor vehicle deaths and injuries on U.S. roads. Additionally, ten percent of drivers aged 15 to 19 who were involved in fatal automobile accidents were reported as distracted at the time of the crashes. It is important for parents to have a conversation with their teens about potential dangers of phone use while driving whether they’re making a phone call, texting or using an app. More important though – parents need to model this behavior. More than half of teens said they see their parents checking or using their mobile devices while driving, according to a Common Sense Media poll. Parents should set rules for themselves and their household regarding distracted driving and give clear instructions not to use wireless devices while driving.

Operators of motor vehicles at any age cannot drive safely unless the task of driving has their full attention. Any non-driving activity a driver engages in, especially using a mobile device, is a risky distraction and increases the risk of crashing and causing injuries. Parents should follow the guide below and review it with their teen drivers to stop themselves from using a mobile device while driving.

Let the Law Offices of Lee Steinberg Handle Your Claim

If you or a family member is a victim of an accident caused by a distracted driver, your first responsibility is to focus on recovery. Before speaking with the insurance company seek out the qualified advice of a car accident attorney. The Law Offices of Lee Steinberg, P.C., has been representing accident victims for over 40 years and we can help you through this difficult time. Call us today for a free consultation about your potential case at 1-800-LEE-FREE.