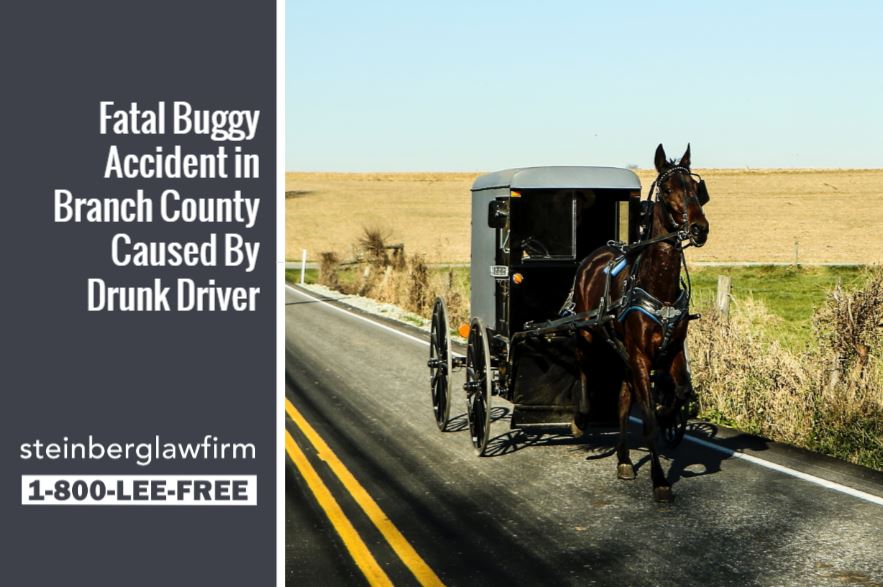 An evening collision, caused by a 21-year-old drunk pickup driver, ended the lives of three young children on Friday, June 7, 2019. Michigan State Police report that the intoxicated truck driver drove right into the rear of an Amish horse-drawn carriage and threw all seven passengers including five children and two adults from the buggy. State troopers told local media that three children, a 2-year-old, a 4-year-old, and a 6-year-old died as a result of the accident. The other buggy passengers, including other young children and the driver, sustained severe injuries, as well as the mother of the children who were killed.

The crash happened in Branch County’s Algansee Township, near the Michigan and Indiana border. Branch County is home to five distinct Amish communities known for horse and buggy crossings where motor vehicle drivers are expected to safely share roads. In 2017, three Amish children were killed in Montcalm County in a similar rear-end crash and in 2016 a buggy vs. motor vehicle accident hospitalized a Michigan Amish family of three.

Michigan saw an increase in traffic crashes involving alcohol in 2018 with 9,786 accidents resulting in 315 fatalities and 5,392 injuries. That is an 11 percent uptick from 2017. In Branch County, nearly 2,000 drivers are involved in more than 1,500 motor vehicle crashes each year and of those drivers involved in alcohol-involved crashed, about 85 percent of them were coded as “had-been-drinking” on the accident report.

Everyone at the Lee Steinberg Law Firm has remained saddened by this tragedy and frustrated that drunk drivers are still such a major road risk, despite drivers being heavily warned and knowledgeable of the deadly outcomes associated with operating while intoxicated or impaired.

3 Tips for Sharing the Road with a Horse-Drawn Buggy

Michigan is home to the nation’s sixth-largest Amish population, including the communities in Branch County. With 86 Amish church districts and more than 35 settlements located from north to south, it’s no doubt that if you are traveling in Michigan, you may find a time when sharing the road with a horse and buggy is necessary.

Amish communities in Michigan include:

At times, the slower speed of a horse-drawn vehicle may frustrate drivers of faster-moving cars, especially when the buggy backs up traffic on rural roads. But the most common cause of a tragic accident with these small, black, and often family filled buggies is a rear-end collision as we observed in the Branch County drunk driving crash. Here is what you can do to avoid crashing into the back of a carriage.

Also, pay extra attention to speed limits, buggy lights, and hazard signs especially while driving in or near Amish communities and on rural roads that may not be well lit. Dangerous driving decisions and risky operator behaviors too often result in serious injuries to others and fatal traffic crashes.

This heart-wrenching accident involving the Amish family in Branch County should serve as an incredible reminder that innocent lives can be taken any time a person decides to operate a motor vehicle after drinking. Please, if you decide to drink, it’s always best to have a plan before you start. Set yourself up with a ride service such as Uber or Lyft, call a cab or have a designated driver. In no circumstance, should you ever drive impaired by drugs or alcohol.

Contact Us Now If A Drunk or Impaired Driver Injured You

The attorneys and staff at the Lee Steinberg Law Firm care greatly about our clients and all of the members who reside in the Michigan communities we serve, including the Amish. No matter what you might be driving, including a horse-drawn buggy, connect with our attorneys who are motor vehicle accident, personal injury and wrongful death experts to learn about your legal rights. If you have been involved in a drunk driving crash, know that we will fight to ensure you and your family members receive the attention, compensation and benefits you deserve.

Please call The Lee Steinberg Law Firm and speak to our accident attorneys at 1-800-LEE-FREE (1-800-533-3733) or fill out the Free Case Evaluation Form. And remember, you pay nothing until we settle your accident case.