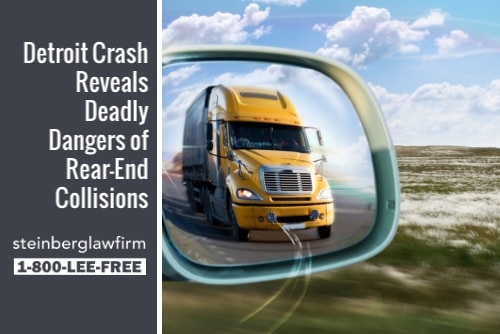 As Michigan State Police continue to gather the details involved in the March 7th crash that killed a 55-year-old woman on I-94, northeast of downtown Detroit, charges against the at-fault semi-truck driver have yet to be made. According to the accident report and local news sources, Michigan State Police (MSP) troopers were called to St. Clair Shores, near 10 Mile Road, in response to a rolled-over semi-truck hauler and multiple vehicles entangled. Initial reports state the 31-year-old driver of the 2006 Peterbilt semi allegedly could not stop in time and rear-ended a Ford Taurus with a Detroit woman inside. Unfortunately, the woman died from her injuries caused by the crash impact. St. Clair Shores is a suburban city bordering Lake St. Clair in Macomb County and is located approximately 13 miles northeast of downtown Detroit.

According to MSP Metro Detroit, the timeline of the semi-truck vs. passenger vehicles crash is outlined below.

Michigan State Police troopers and accident investigators, as well as the coroner, will continue examining all of the crash scene evidence before any charges will be made. We are saddened for everyone involved in this accident and hope they are provided the support necessary during this difficult time. We will continue to update our readers as additional information is presented in hopes to help prevent a tragedy like this from occurring again.

Semi-trucks are unlike any other kind of vehicle on the road. They are bigger and much more difficult to control. These large trucks often weigh 20-30 times as much as everyday cars and trucks, so it makes sense that most deaths involved in semi crashes will be passenger vehicle occupants. For those who survive a collision with a semi-truck, they are more likely to be catastrophically injured because of the size of the vehicle and its extra heavy loads which create an intense force felt throughout the collision. Injuries can include traumatic brain injury or spinal cord injury, potentially resulting in paraplegia or quadriplegia. Neck injuries, broken bones, and amputation injuries are common as well. Internal organ damage and severe burns are more likely in semi accidents as well.

There are several causes for these tragic accidents, including those induced by semi-truck driver choices or the pure design and mechanics of their rig.

Other crash factors that contribute to semi-truck driver induced accidents include improper operator training, poorly maintained brake systems, misinformed load weights, bottleneck traffic and truck drivers who make the poor and deadly decision to operate under the influence of drugs or alcohol.

Semi-trucks and tractor trailers are dangerous when involved in any type of traffic accident, but if these drivers rear-end a smaller vehicle, the pure size and weight of these road hogs is likely to cause a fatal outcome for most involved.

If you or someone you love is involved in any type of accident with a semi-truck, the injuries are likely to be severe or may have caused death. Victims and families may be impacted for a lifetime by the medical and rehabilitative needs after a collision with a semi-truck.

The attorneys at The Lee Steinberg Law Firm refuse to allow trucking companies and their insurance companies to take advantage of victims of semi accidents. Please call Lee Free and speak to our truck accident attorneys at 1-800-LEE-FREE (1-800-533-3733) or fill out the Free Case Evaluation Form. And remember, you pay nothing until we settle your semi-truck accident case.

Anthony: I was going into work. It was approximately a quarter to five. And somebody cut into the lane and as they did that – I had to jam the breaks – the car behind me went right underneath me. It took 45 minutes for them to get me out of the car. I’m a big guy and the pain was so excruciating at one point I literally blanked out.

Franci: When I met Tony he really was suffering from the auto accident that he was in.

Franci: We were able to successfully sue the driver of the car that hit him and get him full policy limits for his pain and suffering.