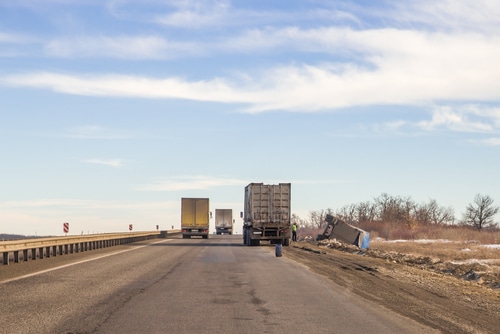 Michigan State Police recently launched Operation “Summer of Semi Safe D”, a program created to crack down on risky and unsafe semi-truck drivers. State Police decided to direct the campaign after seeing an alarming 41 percent increase since 2015 in Michigan deaths involving commercial vehicles, with the great majority of those crashes involving semis. In 2016, studies showed that semi-tractor trailers were involved in an estimated 72 percent of the fatal accidents involving commercial vehicles on U.S. roadways.

Semi-trucks are unlike any other kind of vehicle on the road. They are bigger and much more difficult to control. Large trucks often weigh 20-30 times as much as passenger vehicles, so it makes sense that most deaths involved in large truck crashes are passenger vehicle occupants. These big trucks are taller and have greater ground clearance than cars, which means that lower-riding vehicles can slide beneath truck trailers, with deadly consequences. Underride guards for semitrailers are supposed to stop this from happening, but some guards do not meet federal safety standards and can still fail in relatively low-speed crashes.

Truck driver fatigue remains a well known crash risk since many drivers are still violating the regulations and work longer than the permitted federal hours-of-service that says drivers of large trucks are allowed to be behind the wheel for no longer than an 11-hour stretch. IIHS surveys indicate that electronic logging devices are helping with compliance.

Another crash risk the IIHS reports is truck-braking capability. Stopping distances for trucks are much longer compared with other vehicles, particularly passenger vehicles on wet and slippery roads or if the brake systems are poorly maintained, also a possible cause for large truck rollovers.

The Michigan State Police campaign will focus on a special area of safe-driving messaging each week this summer while keeping close attention to everyone on the roads and looking for unsafe driving behaviors, like speeding and distracted driving.

The campaign was created to speak directly to the big-rigs traveling through the state though. These following areas will be of most concern:

The “Summer of Semi Safe D” campaign runs through the end of August. Until then, can you share this message across your social networks for all truck drivers to see?

If you or someone you love is involved in an accident with a semi-truck, the injuries are likely to be severe or cause death. Injuries can include traumatic brain injury or spinal cord injury, potentially resulting in paraplegia or quadriplegia. Neck injuries, broken bones, and amputation injuries are common. Internal organ damage and severe burns are more likely in semi accidents as well. Victims and families both may be impacted for a lifetime by the medical and rehabilitative needs after a collision with a semi-truck.

The attorneys at The Lee Steinberg Law Firm refuse to allow trucking companies and their insurance companies to take advantage of victims of semi accidents. Please call Lee Free and speak to our truck accident attorneys at 1-800-LEE-FREE (1-800-533-3733) or fill out the Free Case Evaluation Form. And remember, you pay nothing until we settle your truck accident case.