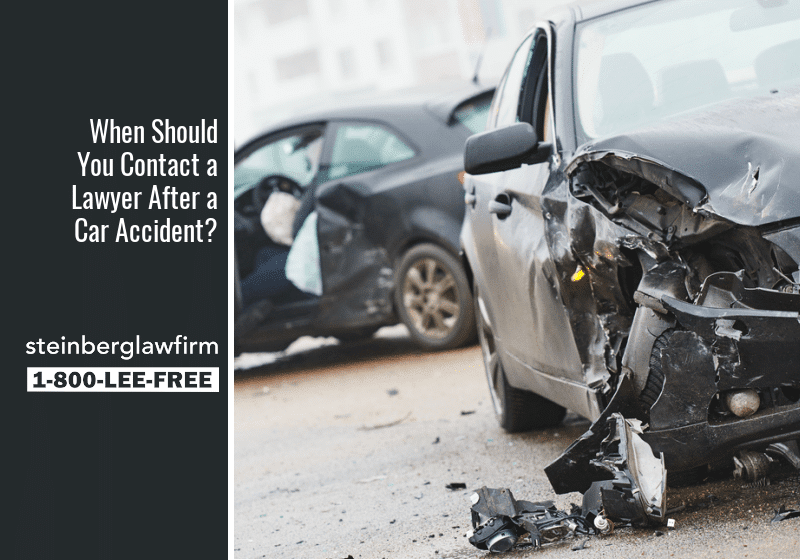 Getting into a car accident is never fun. There is the stress of the entire situation, starting from the damage to the car, the police getting involved and the insurance claim. Then there is the reality of the pain and injuries, with follow up medical treatment.

Who is going to pay the medical bills? What about lost wages? There are so many things to consider following a car crash in Michigan.

Because of all of these questions, and the confusing laws we have here for car accidents, it would be smart to contact an experienced and aggressive car accident lawyer in Michigan as soon as you can following the crash.

Why is that? Because the lawyer can advise you on what exactly you need to do following the car wreck. Time is of the essence following an accident. Witnesses disappear, photos need to be taken, a police reports should be timely made, and other things are important to do to preserve evidence and build a potential case.

A lawyer can also make suggestions on how to get your car fixed following a crash. Because Michigan is a no-fault state, your own car insurance will only pay for the damage caused in a wreck so long as you have collision coverage. In Michigan, if another vehicle was the cause the crash, that vehicle is only responsible for paying the mini-tort claim, which is damage up to $3,000.

Depending on the situation, there may be other things you should be doing to make sure you are not hurting your case. Every case is different so it doesn’t hurt to call a Michigan car accident injury lawyer immediately after a crash occurs.

Be Careful About A Recorded Statement:

One thing to be aware of is the insurance company for the other vehicle will be contacting you soon after the collision. The person who contacts you is known as an insurance adjuster, or claims representative, and they are paid to try to minimize your case so their company’s exposure is limited.

They do this by taking a recorded statement soon after the crash. These statements can be used against you at a later date. The claims representative may try ask leading questions or say things about how the “wreck wasn’t that bad” or “you don’t sound too injured.”

Don’t fall for these tricks. In fact, don’t agree to give any statements, recorded or not, until after speaking to a Michigan car and truck accident lawyer.

What Benefits Can I Get From a Michigan No-Fault Claim?

A good Michigan car crash lawyer can also help you answer who is going to pay for the bills and lost wages that may pile up after an accident. Under Michigan’s no-fault law, almost anybody involved in an accident can apply for an obtain no-fault PIP benefits. These benefits include

Who Pays the Medical Bills After the Car Crash?

But what if you don’t have car insurance at the time of the crash? What happens then? If that is the case, then the auto insurance for a resident relative must pay the bills. This occurs even if the relative’s car or truck was not involved in the wreck.

If there is no insurance in the household, then an organization called the Michigan Assigned Claims Plan, or MACP, must pay PIP benefits. The MACP is made up of car insurance companies and the MACP is supposed to assign an insurance company – like Farm Bureau or Allstate – to pay the claim.

But the application process for MACP cases is not easy. The application asks a ton of questions, including things that have nothing to do with the wreck. And answering the questions correctly is so important because a lawyer hired by the MACP can use errors in the application against you and try to dismiss your entire case later on.

Because of this, it is important to contact a Michigan no-fault accident lawyer after a crash to walk you through the steps of filing a claim for no-fault benefits. Even if the claim is through your own car insurance, you don’t want to make a mistake. Even the slightest error can create a huge headache down the road, including delayed payments or a denial of the insurance claim.

Getting hit by another car or being involved in a car wreck in Michigan is never fun. The law is confusing and the stakes are high. Therefore, it makes sense to consult with a professional when a crash occurs.

The knowledgeable and experienced Michigan car accident lawyers at the Lee Steinberg Law Firm standby ready to answer your questions. The call is free at 1-800-LEE-FREE (1-800-533-3733) we never charge a cent until we win your case. That is our promise to you.

Call us today so we can assist you and get your benefits going immediately during a difficult time.