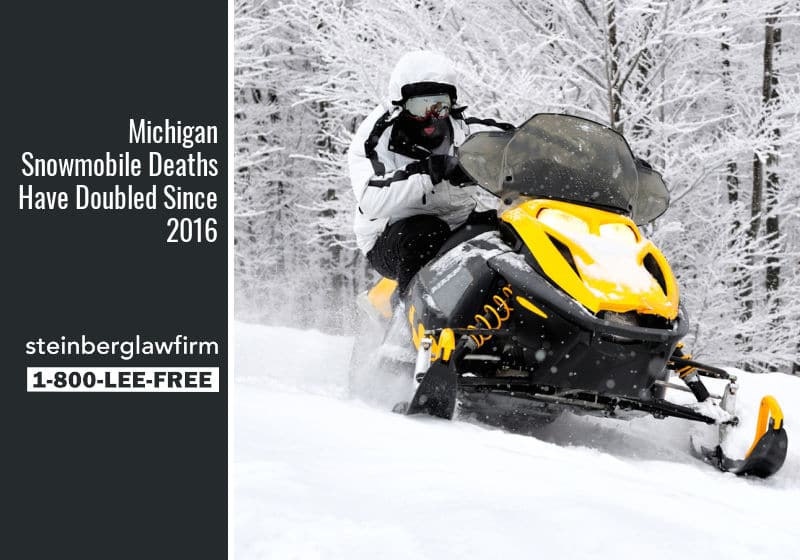 As the snowmobile season is now in full swing in Michigan and fresh snow is hitting every few weeks, residents and visitors are enjoying outdoor activities, but not without officials responding to a rash of accidents involving both snowmobilers and other drivers. The number of collisions and related injuries and fatalities has nearly doubled compared to previous years, including some crashes near Metro Detroit and Ann Arbor trails that run through state parks or take riders through cross-traffic and spaces shared by pedestrians and motorists. Officials anticipate another deadly year based on an already growing stack of reported accidents and four deaths in the current 2020-2021 season alone.

Michigan offers so many outdoor recreation options and activities during the colder months. Sadly, snowmobile accidents and fatalities continue to climb each year, most of the time fueled by inattentiveness, inexperienced riders and bad driver decision making, and equipment failures. In the 2019-2020 season, MDNR reported 14 snowmobile accident-related deaths, in which speed, alcohol, or drugs were involved in more than half of the fatalities. In some parts of the state, like the Upper Peninsula communities of Marquette, Paradise, Sault Ste. Marie, Gaylord, and Munising, as much as 80% of snowmobile accidents and deaths reported are caused by high speed.

How to Get Ready for a Safe Snowmobile Ride in Michigan

As you prepare for your next Michigan snowmobile ride, please take extra time to review these safety requests from MDNR’s “Ride Right” campaign. The awareness program was created to remind drivers to ride on the right side of the trail, slow down, and stay sober.

MDNR also encourages all snowmobilers, regardless of age or experience, to take a snowmobile safety class to protect themselves and others while snowmobiling. Being knowledgeable and respecting the universal snowmobile trail signage will also help keep everyone safe while having fun on the trails.

Helpful Michigan Snowmobiling Facts You May Not Know

Before heading out on a ride, snowmobilers should ensure they are familiar with all of the current rules and regulations for riding in Michigan. Despite what you might see happening in some parts of the state, snowmobile operator-age restrictions do exist and laws are set in place about what is considered a snowmobile or a modified off-road-vehicle (ORV) in Michigan.

In Michigan, a snowmobile means any motor-driven vehicle designed for travel primarily on snow or ice of a type that utilizes sled-type runners or skis, an endless belt tread, or any combination of these or other similar means of contact with the surface upon which it is operated, but is not a vehicle that must be registered under the Michigan vehicle code. If a motorized vehicle is manufactured initially as an ORV, it is considered an ORV, and it is prohibited from riding designated snowmobile trails.

At the Law Offices of Lee Steinberg, P.C., we do what it takes to get your Michigan snowmobile accident case resolved against negligent drivers involved in the crash. We can also answer your Michigan no-fault law questions. If an accident does occur this snowmobile season and you become injured while riding, we can be right there to help. Or, if a snowmobiler hits your vehicle and causes damages or injuries, please call us at 1-800-LEE-FREE for a FREE consultation.