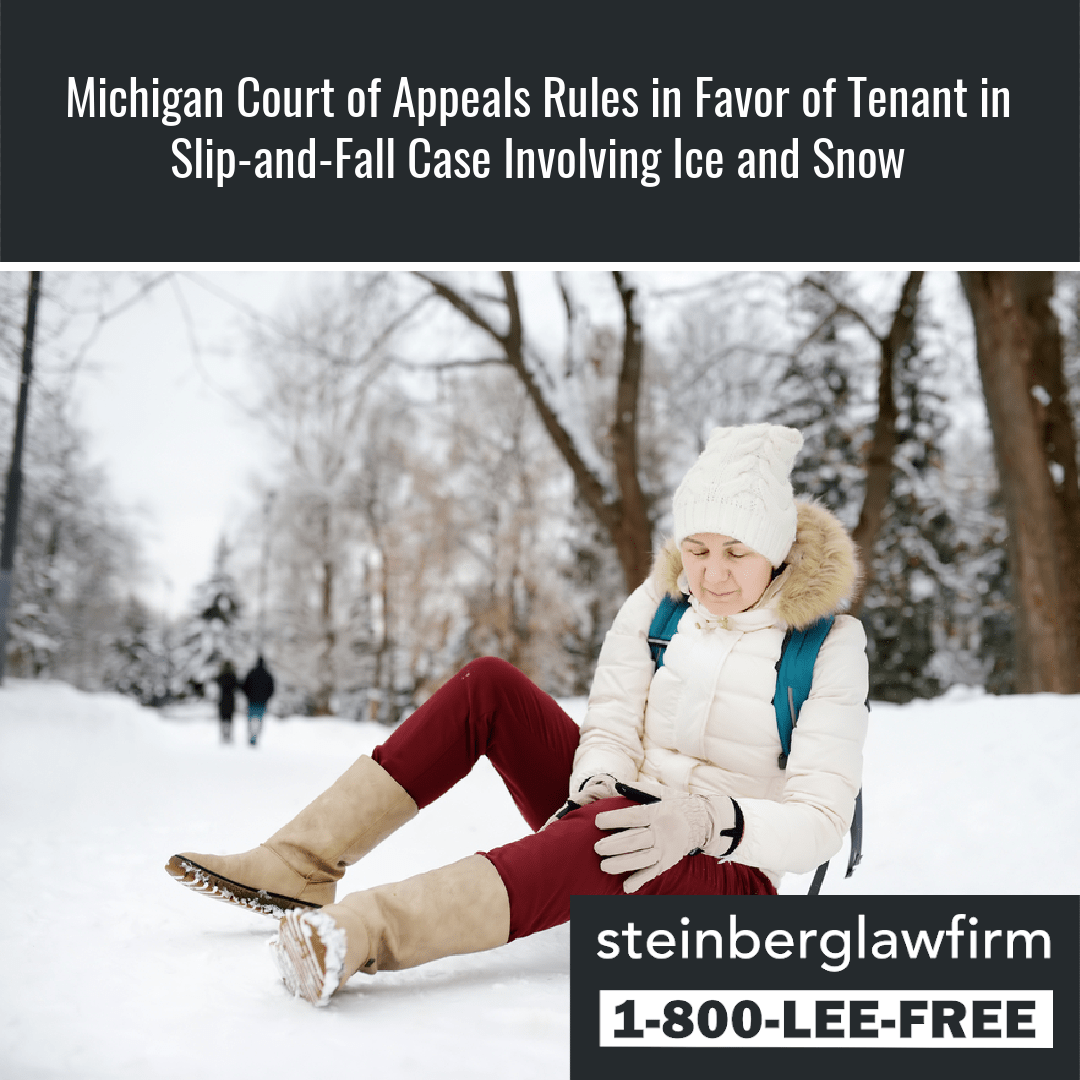 Injuries on a rental property can be frustrating and sometimes life changing. You pay a lot of money to live safely in your apartment or home, and you depend on the landlord, property manager and maintenance workers to ensure the property is safe.

However, injuries do occur and if the landlord was negligent in maintaining the property, the landlord and/or property manager can be held responsible under Michigan law for the injuries the tenant suffers.

This was recently highlighted in Loude v. Iron Street Properties, Inc., (docket no. 351009, unpublished on 12/22/20). In this case, a tenant in Wayne County left his apartment complex to take out a garbage bag to the community dumpster used by residents. He was wearing tennis shoes and testified there was a light dusting of snow covering the ground. After safely reaching the dumpsters, he raised his arm to place the garbage bad inside the dumpster when he slipped and fell. He broke his leg as a result of the fall.

The plaintiff filed a lawsuit against his landlord for his injuries, alleging the landlord did not keep the dumpster area safe and fit for its intended use, in violation of the Michigan landlord-tenant statute, MCL 554.139(1)(a).

The trial court dismissed the lawsuit, ruling the parking lot where the dumpster was located was for its intended use of parking cars, that the landlord had provided reasonable access to the dumpsters and that other people had not slipped in that area the day of the fall. The Court of Appeals however reversed, allowing the plaintiff to proceed with his case to a jury.

In doing so, the Court held the area in the parking lot where the plaintiff slipped and fell was not just intended to park cars. Instead, it was to also allow residents to walk to the dumpster to dispose of their trash.

The plaintiff testified he did not see any ice before the fall, but saw ice on the ground after the fall when the snow was displaced. The building manager testified the area by the dumpsters tended to get slippery and that he had fallen there “multiple times” in the past. He also described it as a “problem area.” In addition, his testimony was all over the place as to whether or not there was snow and ice in the area where the plaintiff fell.

The property manager also testified and said that although there was no ice elsewhere, there was nice where the plaintiff had fallen.

Given this testimony, the Court held there was enough evidence to establish a question of fact to allow a jury to decide whether the area was “fit for its intended use” as required by law.

This decision is important because it is a rare win for tenants injured from a slip and fall due to ice and snow in Michigan. The case law for Michigan snow and ice cases is difficult for injured individuals. Most judges dismiss these cases, holding that snow and ice is “open and obvious” and under Michigan law a landlord doesn’t have a duty to clean up open and obvious conditions.

However, there is a distinction for tenants injured while on the property of their landlord. If the landlord was negligent in keeping the premises in reasonable repair, or failed to keep a common area (like a sidewalk, walkway or parking lot) fit for its intended use, then that is a violation of a statute, specifically MCL 554.139. And because it is a violation of a statute, the landlord cannot use the open and obvious defense to dismiss the plaintiff’s claim for damages.

And that is what happened in the Loude case. The plaintiff utilized the landlord-tenant statute to present a claim for landlord negligence. And he presented enough evidence to show the area near the dumpster was slippery due to ice and snow which had not been salted, making the area “not fit for its intended use.”

The Lee Steinberg Law Firm handles landlord-tenant injury cases involving ice and snow all over Michigan. We take a proactive role in investigating these claims. The injuries from slip and falls can be catastrophic. We have represented clients who have broken a leg, hip, elbow, arm, sustained a closed head injury or traumatic brain injury, as well as other injuries while on their rental property.

When a landlord fails to keep their premises in reasonable repair and safe, they can be held responsible for the injuries and damages their negligence causes. This includes the payment of medical bills (such as hospital and doctors’ bills), lost wages, out-of-pocket costs, as well pain and suffering.

Give us a call at 1-800-LEE-FREE (1-800-533-3733) if you have any questions about a slip and fall on a rental property. Our Michigan landlord-tenant injury lawyers are standing by, ready to answer your questions. And we never change a penny until we win your case.