After a Motorcycle Accident In, Who Pays My Medical Bills?
Skip to content 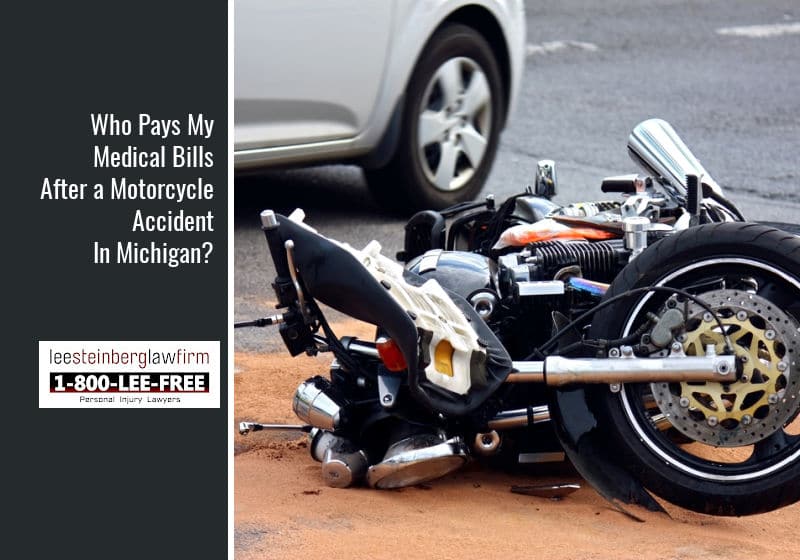 Motorcycle crashes are very traumatic events. They can result in bad damage to the bike, horrible injuries and even the unthinkable. Because motorcyclists are unprotected, they can be some of the most gruesome injuries hospitals and doctors treat. The bills that come from the treatment can be huge, leaving injured motorcyclists with major financial burdens and stress. This is where a winning Michigan motorcycle accident lawyer can help you, or your family, get the medical bills paid.

Getting medical bills and expenses paid after a bad motorcycle crash in Saginaw is achievable, even if you don’t have health insurance or are on Medicaid or Medicare. There are certain things to consider though when evaluating who will pay the bills.

Was a Motor Vehicle Involved in the Motorcycle Crash?

There is one major exception to this rule however. Under MCL 500.3101, if the injured person was the owner of the motorcycle, he or she must have purchased motorcycle insurance on the bike. And that insurance must have been in effect at the time of the crash. If the motorcycle was uninsured, then the owner cannot make a claim for PIP benefits.

What are PIP Benefits from a Motorcycle Accident?

Personal injury protection (PIP) benefits, also known as a no-fault benefits, are payments an auto insurance carrier makes as a result of injuries from a motorcycle accident. These benefits include:

Even if you do not have health insurance, and even if you do not have auto insurance, you can still get access to this PIP coverage and no-fault benefits. Again, individuals injured on a motorcycle can receive payment from an auto insurance company for their medical bills even if he or she is totally uninsured. An experienced Michigan motorcycle accident law firm can explain how to do this.

Under Michigan law, there is a rule that tells everyone which car insurance carrier is responsible for paying no-fault benefits following a crash. Again, these benefits are only eligible to a motorcycle owner who was injured if he or she maintained insurance on the motorcycle at the time of the accident. Motorcyclists who were borrowing the bike at the time of the crash can still make a no-fault claim, even if there was no insurance on the bike.

The order of priority for which auto insurance company must pay benefits is found within MCL 500.3114(5). However, I will describe the rule is simple terms right now.

In general, a person who is injured while the operator or passenger of a motorcycle that involves a motor vehicle (car or truck) in Saginaw, must claim PIP benefits in the following order of priority:

1. The insurer of the owner or registrant of the motor vehicle involved in the accident.

2. The insurer of the operator of the motor vehicle involved in the accident.

3. The auto insurance carrier of the operator of the motorcycle involved in the accident.

4. The auto insurance carrier of the owner or registrant of the motor vehicle involved in the accident.

Let me explain this in more detail. You always start with the insurance company of the car owner. For example, you are riding your Harley Davidson when you are blind-sided by a SUV that made an illegal left-hand turn. The motorcycle is insured with Progressive. You sustain multiple injuries, including a broken leg and road rash. The owner of the SUV is insured with State Farm. In this case, State Farm must pay your PIP benefits. This is true even if you have your own auto insurance policy.

If the owner of the SUV did not have insurance, but the operator was someone different and has insurance say with Allstate on their own car, then Allstate must pay your no-fault claim.

If the vehicle and the operator are uninsured, only then do you turn to your own auto insurance carrier for no-fault benefits. In the above example, let’s say the Harley Davidson owner has two cars, both insured by AAA Insurance. Then in this scenario AAA Insurance would pay the no-fault PIP claim.

If there is no auto insurance at any level, then the injured Harley Davidson motorcyclist can file a claim for PIP benefits with the Michigan Automobile Insurance Placement Authority, also known as the Michigan Assigned Claims Plan. Under the MACP, the Plan (which is run by the insurance industry with oversight by the State of Michigan) will assign an insurance carrier to pay the PIP benefits.

What If the Car Owner Has Limited PIP Coverage in their Auto Policy?

The problem with this order of priority is that the injured motorcycle driver or passenger is held captive to the PIP insurance coverage the car owner decided to purchase. Michigan no longer requires everyone to have unlimited PIP policies. Now drivers can choose how much PIP coverage they want. Some folks have only $250,000 in coverage, while certain individuals on Medicaid are eligible to purchase only $50,000.

This doesn’t make any sense and is one of many major problems with Michigan’s revised no-fault law. Politicians in Michigan agree that changes need to be made, including the order of priority for motorcycle injuries. However, Governor Whitmer has not been presented with a bill passed by the state legislature making these changes. As such, we are struck with this rule, as ridiculous as it is.

The Michigan motorcycle crash lawyers at the Lee Steinberg Law Firm are working hard to ensure these changes are made.

Who was at Fault or Negligent for the Accident?

An important part of every motorcycle accident case in Saginaw and Michigan is fault. The cause of the crash will help determine how much money a motorcycle accident victim may be entitled to receiving for his or her injuries and everything taken from him or her.

If the motorcyclist was not at-fault for causing the crash or accident, then he or she can obtain money compensation from the owner and driver of the car or truck who caused the accident.

This is true even if the Saginaw motorcycle owner failed to insure the motorcycle! So even though a motorcycle owner cannot get PIP benefits if he or she fails to purchase motorcycle insurance, that person can still make a claim for pain and suffering against the owner or driver of the car.

Can I Get Pain and Suffering Following a Motorcycle Crash?

Under the law, if another motorist is at least 50% for causing a crash, then the motorcyclist injured due to the fault of the motorist is entitled to receive what is known as “non-economic damages.”

Non-economic damages is a legal term and doesn’t really explain much. The easiest way to think about this term is that it basically means “pain and suffering.” Non-economic damages refer to all the harms and losses a person on a bike suffers that are not economic damages, like medical bill and lost wages. It’s everything taken away from the motorcycle victim. Examples of these types of damages include (1) physical pain and suffering, (2) mental anguish, (3) fight and shock, (4) denial of social pleasures and enjoyments, (5) embarrassment, humiliation or mortification.

Who Pays the Medical Bills if PIP Coverage Runs Out?

Remember, the motorcyclist cannot go back to their own auto insurance for payment. In the above example, AAA Insurance owns nothing in the way of PIP benefits. It simply is not in the order of priority.

But what the motorcyclist in this situation can do is put the outstanding medical bills that still exist after the PIP is all used up on the at-fault driver and owner’s insurance. In the above situation, because the SUV owner had insurance with State Farm, not only would State Farm have to pay all the PIP, but it must also pay the medical bills through the bodily injury (BI) coverage.

This can be bit confusing and insurance carriers don’t like to disclose the amount of BI coverage they have. But an aggressive and honest Saginaw motorcycle accident law firm that handles these cases everyday can help set up the proper claims. The motorcycle injury attorneys can also make sure you get the money damages you are owed.

The attorneys and legal professionals at the Lee Steinberg Law Firm have been handling and winning motorcycle accident cases for our clients in Saginaw for over 40 years. Our firm handles cases all over Michigan, from Detroit to Traverse City, from Grand Rapids to Saginaw and Bay City. We help make sure our clients are made whole. We make sure they are receive justice and the wrongdoers are held accountable.

Call our office toll free at 1-800-LEE-FREE (1-800-533-3733) for a free consultation. We can here to answer your questions. Our team of experienced motorcycle crash attorneys can take the pressure of you and your family while you recover. And as always, we never charge anything until we win your case.