How Much Michigan Car Insurance Should I Purchase?
Skip to content 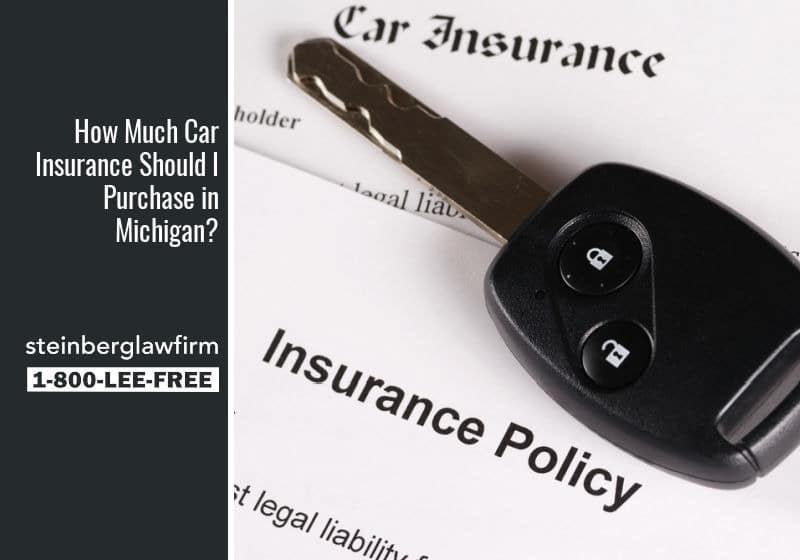 Buying auto insurance in Michigan is never fun. It is not cheap, it’s confusing and the insurance agent on the other end of the phone doesn’t tend to do a good explaining it all. Then there are the questions we always ask ourselves. Am I buying the right kind of auto insurance? Did I get the right coverages? Did I purchase enough car insurance in case something bad happens and I need a Michigan car accident lawyer?

This article will help to explain it all and provide you with some answers.

First, a brief background on Michigan car insurance to help you along. Michigan is a no-fault state meaning that you are entitled to certain benefits from your OWN auto insurance if you get into an accident. No-fault insurance is also known as PIP or personal injury coverage. Except in certain circumstances, it is mandatory to purchase.

PIP coverage is insurance coverage that covers medical expenses, lost wages, prescriptions, and family care for injuries from a motor vehicle accident. These benefits are huge, and can include paying for hospital stays, surgery, physical therapy, rehabilitation and other large medical expenses. And remember because Michigan is a no-fault state, a person is entitled to these benefits even if they were at-fault for causing the wreck!

Under the new Michigan car accident law that went into effect on July 1, 2020, there are different levels of PIP coverage you can purchase. They are the following:

Before the change in the law, all Michigan PIP policies had unlimited coverage. Purchasing the smaller amounts will save money, but the guaranteed savings are somewhat limited. And in fact, if you elect to go a new auto insurance carrier, the savings for selecting a limited PIP coverage amount can go down to zero.

It is important to price the PIP coverage options and prices with various insurance carriers. The results can vary a lot. But don’t just go with the cheapest price because the are other things to consider when buying auto insurance, as explained below.

Bodily injury coverage, or BI coverage, is the insurance that covers you or a person operating your vehicle if you or another person causes the crash. Think of it as your protection in case you do something wrong.

However, under the law the default amount of coverage is actually $250,000 per person or $500,000 per occurrence. To get a lower amount, the applicant must sign a specific form that outlines the dangers of selecting less insurance.

And the dangers are real. Because people can now select limited PIP policies, for the first-time people who exhaust or use up their PIP coverage following a bad Michigan car wreck can make the at-fault driver pay for ongoing medical expenses, lost wages and other damages. This gives the at-fault driver or car owner almost unlimited exposure when something awful happens.

Here’s an example. A person is injured in a rear-end car accident in Detroit. The victim suffered a broken arm and leg from the wreck and only had $50,000 in PIP coverage. After a hospital stay, two surgeries and multiple rounds of physical therapy, the medical bills alone will be more than $100,000. After the victim’s auto insurance pays its portion – the $50,000 in PIP coverage – the victim can make the at-fault driver pay for all the remaining outstanding bills.

As you can see, this new change in the law has a dramatic effect on negligent drivers and owners, leaving them open to huge liability exposure. As a result, every motorist and policyholder in Michigan should purchase at least the $250,000 default option. If you own a home and have assets like a pension, IRA, 401k account or other assets, then you should purchase a higher amount to protect yourself.

This is a no brainer. And what’s interesting is the increase in BI coverage is not usually that expensive. For example, the difference between $500,000 and $1,000,000 in coverage is sometimes not more than $30-$50, depending on the carrier.

It is estimated that about 25%-50% of Michigan drivers are uninsured. In cities like Detroit and Flint, the numbers are even higher. Because of this reality, UM coverage is a lifesaver. Although it is not mandatory, it is something every person should buy when getting car insurance in Michigan.

Uninsured motorist coverage steps into the shoes of the uninsured at-fault driver. For example, say you are hit by a drunk driver who doesn’t have insurance. You sustained a bad injury, such as a herniated disc. You can always sue the at-fault diver, but if he or she doesn’t have car insurance, they probably aren’t collectable. Instead, you can turn to your OWN car insurance carrier and make a claim for UM benefits.

UM benefits then pay out the pain and suffering you sustained as a result of the wreck. If your PIP coverage is used up, UM insurance will also cover outstanding medical expenses, lost wages and other economic losses. Under the new law, the minimum amount of UM coverage is $50,000 per person and $100,000 per occurrence.

Uninsured motorist coverage is similar. UIM coverage kicks in if you are injured by an underinsured at-fault driver. For example, say you sustained injuries worth $150,000, but the person who caused the accident only has $50,000 in BI coverage. To obtain the remaining $100,000, you can turn to your own auto insurance by making a UIM claim. Like UM coverage, UIM covers the pain and suffering sustained by the injured person, as well as medical bills and lost wages if the PIP coverage is used up.

In the grand scheme of things, UM and UIM coverage is not expensive. In my opinion, they are the best “deals” when buying auto insurance. Always ask your insurance agent about purchasing UM and UIM coverage when looking around for a policy. If they don’t offer UM or UIM, or don’t recommend you purchase it, run and find a new agent immediately!

Collision and comprehensive coverage is one of the more expensive and annoying types of auto insurance coverage in Michigan. Because Michigan is a no-fault state, YOU are responsible for insuring the property damage for your own car. This is the case even if you did not cause the accident.

So if you do not have collision coverage, and instead just have PLPD, and another person runs a red light and causes damage to your car, that person is only responsible for paying up to $3,000 in damages. The rest if your own responsibility.

There are three forms of collision coverage:

Comprehensive coverage pays for damage to a vehicle for causes other than a collision with another car. Typical comprehensive coverage includes a tree falling on a car, fire, theft, vandalism, riots, explosions, wind or hail damage, or colliding with an animal like a deer.  There is typically a deductible associated with this coverage.

Collision and comprehensive coverage are expensive. But because they are not mandatory, you do not have to purchase them. However, because the other person only has to cover up to $3,000 in damage, it is advisable to get this insurance if you can.

Michigan is a confusing state for car insurance. I hope this article helped explained some of the nuances and choices. If you or a loved one has been injured in a Michigan car accident, whether it was in Detroit, Flint, Saginaw, Grand Rapids, Traverse City or any point in between, please call us toll free at 1-800-LEE-FREE (1-800-533-3733).

We don’t charge a penny until we win your case and our dedicated team of Michigan auto accident lawyers are standing by, ready to help you put the pieces back together.