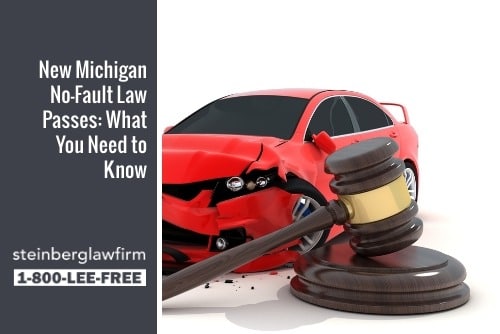 Michigan No-Fault Reform Recap – What You Need to Know

Last week, Governor Whitmer signed a bill that contains sweeping changes for the Michigan No-Fault Law. The governor, despite promises to the contrary, removed the mandatory unlimited PIP coverage that has protected so many Michigan citizens over the past 45 years. The new legislation, which is approximately 120 pages, provides for options in PIP coverage, a temporary rate decrease for PIP coverage (with no guarantee of a decrease in the total premiums), a low fee schedule for medical providers, and a host of other major reforms.

The new law prevents thousands of injured individuals across from Michigan from getting the care and treatment they need following a car, truck or motorcycle accident. It places medical treatment in the hands of auto insurance companies, rather than doctors and families.

The following is an overview of the new law.

Beginning July 1, 2020, individuals can select the following levels of coverage, depending on eligibility:

In addition, an applicant will be able to opt out of no-fault coverage and coordinate benefits based upon “other health or accident coverage.” This would apply if the named insured, his or her spouse and all resident relatives have accident and health coverage that will cover them should they be injured in a motor vehicle accident.

Under the new law, the average reduction per vehicle for the premium rates for PIP coverage in effect on May 1, 2019 are the following:

It is important to note these reductions are not permanent and again only represent the PIP coverage portion of an auto insurance premium, which is usually only 1/3 of the cost of a given policy.

This fee schedule applies to hospitals and trauma centers as well. Although the fee schedule differs somewhat based on the number of Medicaid patients the facility treats, most medical providers will now only receive 200% of the Medicare reimbursement rate beginning on July 1, 2021. And this reimbursement rate decreases after each subsequent year.

This reimbursement amount is much lower than the “reasonable and customary” amount medical providers now receive for treating individuals following a car accident.

Change in Order of Priority

The new law also makes massive changes to who pays no-fault claims and how much in PIP coverage is provided to certain individuals. The most notable change pertains how injured individuals who don’t have auto insurance themselves, or live with a resident relative with auto insurance, are treated.

This is a change from the current law, where occupants in a motor vehicle go through the insurance carrier of the owner or driver of the car they occupied first before going to the assigned claims. Claimants going through the assigned claims must complete an application form provided by the MAIPF and provide reasonable proof of loss to the MAIPF. They will also have to submit to onerous Examinations Under Oath (EUO), sworn testimony that insurance companies use to delay and then deny payment of benefits.

The amount of PIP coverage afforded to individuals going through Assigned Claims also changes significantly. Going forward, the MAIPF will only have to pay claimants up to $250,000 in PIP benefits in most situations. There is no limitation currently.

Furthermore, the new law contains a managed care option. For some undetermined reduction in a premium, the auto insurance company can sell the policyholder a managed care plan to direct care. This option will operate much like an HMO, giving the auto insurance carrier the ability to monitor and direct medical treatment following a car accident. Managed care options will include co-pays and deductibles. This is a dangerous part of the new law as it will give companies like State Farm and Allstate the ability to direct their customer’s medical treatment from the beginning of the claim until the end.

For years, auto insurance companies have been inappropriately using non-driving factors to set their rates. This is known in the industry as redlining. These factors include marital status, gender, ZIP code, credit score, occupation, education level and home ownership. Under the new no-fault plan, these non-driving factors can no longer be considered when setting rates.

Although this is a step in the right direction, the insurance carriers carved out a huge exception to get around this so they can continue to charge disadvantaged individuals more money for car insurance. The new plan still says that insurance companies can: (1) determine rates by “territory,” which may be an area as small as a census tract (i.e., roughly the size of a neighborhood) and (2) consider credit history or “insurance scores” (which are partly based on credit information) when setting rates.

These increases are needed because medical bills and wage loss that exceed the new caps in PIP coverage can now be applied to a third-party negligence claim. This is entirely new. Currently, negligence claims are for pain and suffering only in almost all Michigan negligence cases. Under the new law, an injured person can now seek economic damages in excess of the allowable expense limits available. Under the new law, medical bills incurred after PIP coverage has been exhausted can now be claimed under in the negligence case.

In addition, the law changes the threshold definition for “serious impairment of body function,” codifying the standard found in the Michigan Supreme Court case McCormick v. Carrier. To obtain pain and suffering compensation, an injured person must still have a threshold injury. This does not change under the law.

However, the definition of what constitutes a “serious impairment”, is now the following:

Other Important Changes to the Law

The changes in the Michigan No-Fault Law are profound and will impact thousands of individuals injured in crashes and wrecks throughout the state for years to come.

If you have any questions, please contact Lee Free at 1-800-LEE-FREE (1-800-5333-3733) with any questions. Our dedicated team of Michigan car accident injury lawyers stand by ready to assist you. The phone call is free and we don’t change anything unless we win your case.