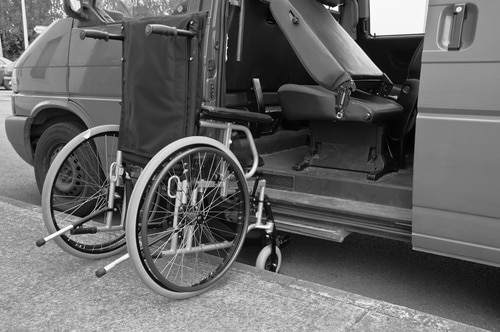 The Lee Steinberg Law Firm is happy to announce a significant settlement for an Oakland County man who was severely injured in a violent car crash in 2016.

Our client, a gentleman born with a special form of Muscular Dystrophy and confined to a wheelchair, was a passenger in a vehicle on Dixie Highway in Oakland County when his vehicle was stuck by another motorist. The defendant, who was driving a large van, made a left turn in front of the van our client occupied, causing a collision at an estimated 45-50 mph.

The impact propelled our client out of his wheelchair. He sustained serious brain injury, as well as multiple fractures to his legs, left arm and hand.

The defendant in this case admitted to the responding police officer that she didn’t see the oncoming vehicle as she was turning left into traffic. However, the defendant, presumably though her attorneys, attempted to shift blame to the “person who strapped” our client into his wheelchair and the manufacturer of the straps.

This defense, which was weak and ill-advised, eventually went nowhere as the defendant driver eventually admitted to be the sole cause of the accident.

Our client’s injuries and post-accident medical treatment was extensive. He sustained a traumatic brain injury, with a fracture and post-concussion syndrome with residual neurocognitive disorder. He also had post-traumatic headaches.

Prior to the accident, despite his illness, our client led a full and active life. He was engaged with a child at the time of the accident, and enjoyed spending time with his family and participating in many activities. He worked as a tutor at a local community college and was an avid photographer.

In addition, he was the Vice President of Volunteers Assisting the Disabled, and was one class shy of completing his College Reading and Learning Association certificate. He also enjoyed walking his dog, going places as a family and giving his daughter wheelchair rides. He spent a great deal of time outside and active.

Due to his injuries sustained during the crash, he has lost most of whatever independence he had.  His muscle atrophy worsened due to his lack of activity while his limbs were in casts and not used, so he had diminished use of both legs and left arm/hand.

He eventually returned to work on a limited bases, but could no longer give his daughter many of the same activities he did before the violent car crash.

After aggressively pursuing this case through a lawsuit for our client in Oakland County Circuit Court, attorney Franci Silver obtained a large and satisfactory settlement for our client. Our client and his family can now move on from this horrible incident the best they can. We are so grateful for our clients and work proudly on their behalf each and every day.