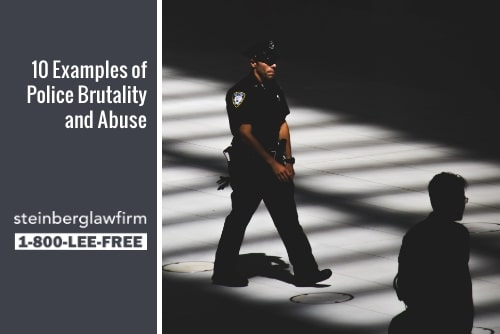 10 Examples of Police Brutality and Abuse

More than 900,000 law enforcement representatives serve across the United States each year, and over one million Americans work for police departments. In Michigan, an estimated 19,000 officers are trusted to legally permit the use of force on others but not through threats of violence, intimidation, shooting or beating of an unarmed individual who has committed a non-violent crime. But Michigan police officers have been known to break laws and cause harm to the people they should be protecting in many different types of communities. When this occurs, a violation of a person’s civil rights and Constitutional rights may happen through these ten examples of police brutality and misconduct.

Since 2001, the most common forms of police misconduct and abuse reported remains to be excessive force, false arrest, and false imprisonment. Examples of these types of brutality can include punching and kicking an individual, misuse of tasers, batons, sprays, firearms, putting a person in a chokehold or unreasonable restraints.

If a Michigan police officer engaging in these forms of brutality and abuse injured you, compensation for your injuries is deserved and may include financial support for medical bills and related out-of-pocket expenses, lost wages and pain and suffering.

Watch: Attorney Rebecca Filiatraut explains why she finds her work in police misconduct so rewarding.

According to a 2018 study led by Boston University School of Medicine, several socioeconomic factors such as poverty, unemployment, education, and segregation create disparities and connections to police who commit serious crimes — primarily in minority communities where the police shootings of unarmed African-American/Black males are on the sharp rise. The people in these groups, many of who become victims of police brutality, often feel powerless and do not have the resources needed to demand the justice they deserve.

Police officers were involved in more the 20 fatal shootings in Michigan in 2018 and thousands of police misconduct complaints, many involving racial divisions.

The number of these police-involved shootings represents a 50 percent increase from all reported in 2017.

The Michigan Department of Civil Rights has been holding regular hearings to address community concerns of the discriminatory policing by the Grand Rapids Police Department (GRPD) for some time now. Related incidents include the distribution of No Trespassing Letters, implementing a Photograph and Fingerprint Policy, and Contacting ICE Based on a Person’s Ethnicity. Other reports received by the Michigan Department of Civil Rights concern racially profiled youth of color who would not have been otherwise stopped; the issuing of false warrants to the U.S. Marshall’s Fugitive Task Force and taking DNA without consent and without a warrant; officers engaging in excessive force and police brutality.

Also, several highly publicized and sensitive events have occurred where the GRPD has handcuffed or pulled guns on children of color, including African-American/Black and Latino youths, occurred on these days at these Grand Rapids neighborhoods:

Some Michigan police departments are doing their job and should be commended for implementing better officer training and reformed policies and practices to serve communities better. As a result of those efforts, some local police departments have experienced drops in the number of complaints, police assaults and police shootings. We hope these same trends are set to happen – quickly – in Grand Rapids.

What to Do If Michigan Police Violate Your Rights

Through these unfortunate incidences of brutality and abuse, the police may also deny a person’s basic rights to remain silent, to refuse consent to a search of yourself, your car, or your home, to leave if you are not under arrest and the right to an attorney.

Police serve as an invaluable asset to our state, but if they violate your rights or the rights of your children, the ACLU of Michigan offers these suggested steps:

The Department of Justice reports 52 percent of police officers say that it is not unusual for law enforcement officials to turn a blind eye to the improper conduct of other officers and 61 percent say that they do not always report serious abuse that has been directly observed by fellow officers. Very rarely are police prosecuted for their wrongdoings, including fatal shootings. Investigators may be housed in the same police department the officer is from and evidence needed comes from other officers who do not allow their partner to be found at fault.

Police Misconduct and Abuse Must Be Addressed

Every citizen has rights under section 1983 of the Federal Civil Rights Act and to their Constitutional rights. As fearful as it may be to make your injustices caused by police brutality or abuse known, you need to make an appointment to speak with an attorney at The Lee Steinberg Law Firm who has experience in handling these serious cases.

If you or someone you know may have been the victim of police brutality or misconduct, talk to one of our lawyers as soon as possible to secure all evidence. Please call Lee Free at 1-800-LEE-FREE (1-800-533-3733) or fill out the Free Case Evaluation Form. And remember, you pay nothing until we settle your case.

In my 22 years of practice, I’ve been representing victims of police misconduct each and every year that I’ve been practicing.

And I think that the most important sense of accomplishment that those cases give me is really bringing some justice to probably the most vulnerable people in our society.

And, to me, the most important thing in these cases is getting justice for the families and also for holding police officers accountable – just like everyone else – despite the fact that they have a badge.