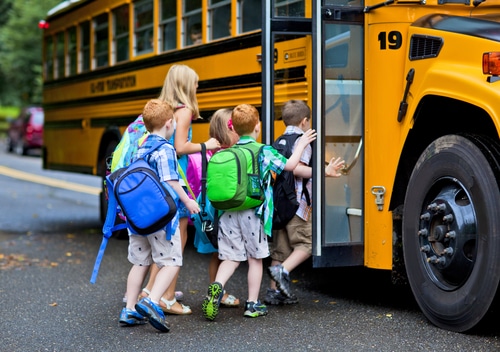 Local police in Marquette County recently reported a morning school bus crash on US-41 in Michigan’s Upper Peninsula involving 11 elementary-aged children. Investigators say a 2013 black Dodge Avenger collided with an Ishpeming Public Schools bus after the bus driver had attempted to cross the highway but pulled directly into the path of the oncoming vehicle instead. The bus was sent into a nearby utility pole. At the time of the crash, all of the children’s injuries were reported minor and none were life-threatening. The driver of the Avenger was also injured in the crash and admitted to a local hospital for treatment.

If reading this makes you queasy, parents and caretakers should know that for the more than 23 million schoolchildren who ride the 480,000 school buses each day, children are still much safer taking a bus to and from school than traveling by car, riding their bike, or walking but accidents like this can happen and injuries may occur. Each year, about 17,000 children are treated in hospital emergency rooms for injuries associated with school buses. Children can be injured when riding the bus, getting on or off the bus, or standing near the bus. Thankfully, most of those injuries will be considered minor and only cause sprains, strains, scrapes or bruises, according to the National Highway Traffic Safety Administration (NHTSA).

As its just as important for drivers to know the rules when sharing the road with a school bus such as stopping no less than 20 feet from a bus displaying alternately flashing red lights and not proceeding until the school bus has resumed motion, the NHTSA offers these tips for families to review with their children who ride a Michigan school bus:

Regardless of the cause of an accident with a school bus, victims are entitled to Personal Injury Protection (PIP) benefits, also known as first-party benefits, under the Michigan No-Fault Law.

If you or your child has been injured in a school bus accident, the motor vehicle accident attorneys at the Law Offices of Lee Steinberg are ready to use our decades of experience to help your family move forward and start the healing process. Not only can a personal injury lawsuit help ease financial burdens on your family, but it can help create change in a system that poses serious dangers to other kids every single day.