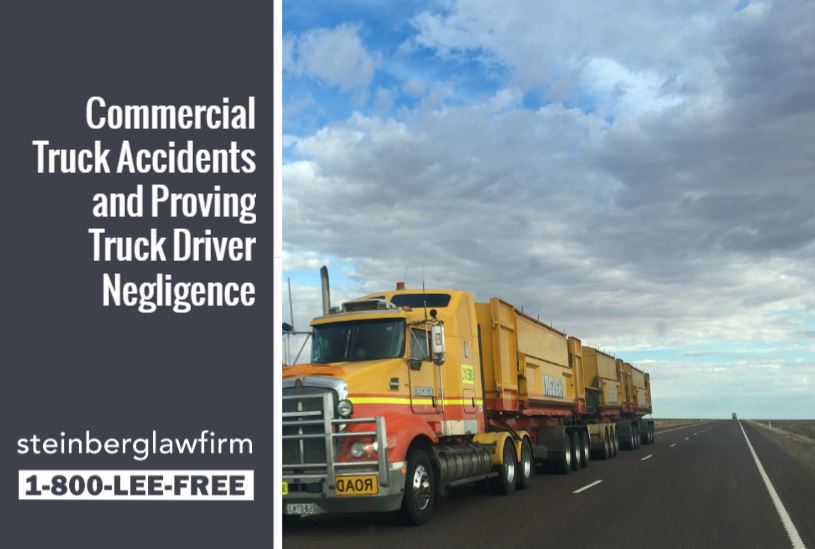 Semi-trucks are more demanding of the road and require specialized training, education, and experience to drive. Operating at 400-600 horsepower, the pure size and weight of these massive shifting tractor-trailers is a cause in itself to create a tragic crash scene when colliding with smaller vehicles or motorcycles. And when you mix together the force of speed created by the 40-ton vehicle plus its load weight and the inability to stop quickly, the outcome is almost always tragic for those involved. But many times, these crashes could be avoidable.

Some of the unique possible factors in proving semi-truck accident negligence include:

Large trucks often weigh 20-30 times as much as passenger vehicles, so it makes sense that most deaths and life-long injuries that result from large truck crashes are those of passenger vehicle occupants. Those injuries can include traumatic brain injury or spinal cord injury, potentially resulting in paraplegia or quadriplegia. Neck injuries, broken bones, and amputation injuries are common as well. Internal organ damage and severe burns are more likely in semi accidents.

As reported by The Michigan Department of Transportation in June and July of 2019 via the midrive online database.

M-14 at I-94: A deadly crash on M-14 at I-94 in Ann Arbor shut down eastbound M-14 near Barton Drive on the Huron River bridge. According to the Michigan Department of Transportation, another semi-truck lost control and crashed into a parked semi-truck. The second semi-truck rolled over and caught on fire, and the driver was found dead at the scene, while the first semi driver suffered minor injuries.

M-33 and M-55: Michigan State Police reported that a 17-year-old driver from Troy collided with a semitrailer at the intersection of M-33 and M-55 as the summer season began. Investigators said the semi-truck was traveling westbound on M-55 with a green light when the 17-year-old male, who was traveling southbound on M-33, collided with the truck and was dragged approximately 100 feet before the semi-truck was able to come to a stop. The young driver sustained severe injuries and required immediate medical attention and hospital transport. The 41-year-old male driver of the semi-truck was uninjured in the collision.

US-23: At US-23 in Milan, a mid-week morning crash left a semi-truck’s cab detached and trailer in pieces at Carpenter Road. Accident reports say the driver lost control of his truck, which jackknifed and then hit an overpass. Miraculously, no other vehicles were involved, and injuries were not reported.

I-96 at M-43: An accident involving two semi-trucks forced all lanes of westbound I-96 at M-43 (Saginaw Highway) to be closed in Delta Township. The Michigan Department of Transportation (MDOT) reported the crash at Exit 93 in the early morning hours involving a semi-truck driver being rear-ended by another vehicle.

Even though truck drivers and motorists travel the same roads, semi haulers do ride by their own set of special rules and training to ensure safe operating. They also have different types of accident policies and more powerful insurance companies working for them. Seeking a fair settlement and the compensation you deserve can be frustrating, especially for someone already dealing with the costly consequences of their accident injuries. These savvy agents can be quick to place blame on other drivers rather than the negligence of a commercial trucking company or big-rig operator. So, it has to be proven that the truck driver did something wrong to cause the collision to make a claim. When working with an experienced truck accident attorney, an intensive review of facts and evidence to make a case will be done through:

If you or someone you love is involved in an accident with a semi-truck, the injuries are likely to be severe or cause death. Victims and families both may be impacted for a lifetime by the medical and rehabilitative needs after a collision with a semi-truck.

Involved and Injured in a Semi-Truck Accident?

The attorneys at The Lee Steinberg Law Firm refuse to allow trucking companies and their insurance companies to take advantage of victims of semi accidents. Please call Lee Free and speak to our truck accident attorneys at 1-800-LEE-FREE (1-800-533-3733) or fill out the Free Case Evaluation Form. And remember, you pay nothing until we settle your truck accident case.

Also Read: Data Shows Van Buren County Has a Dangerous Stretch of I-94