Michigan's Most Dangerous Highways and Interstates
Skip to content 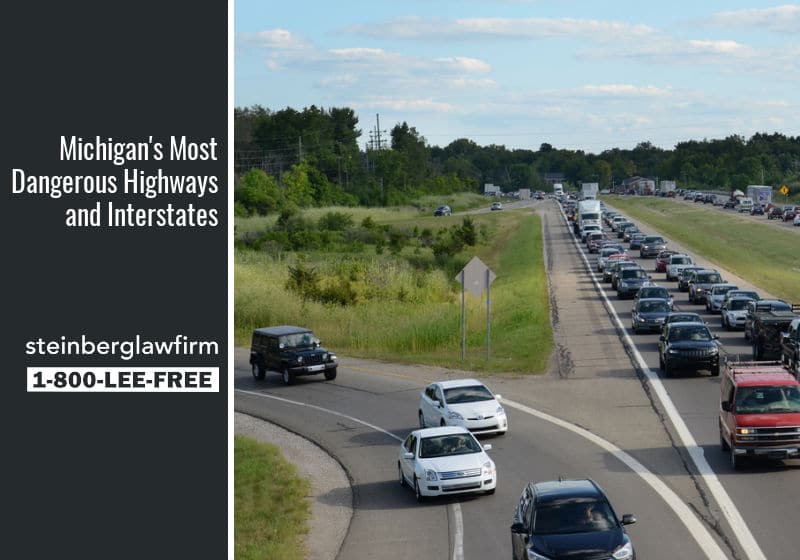 Five of Michigan’s Most Crash Prone Highways and Interstates

Although Michigan saw fewer motor vehicles on the road in 2020, there were more traffic deaths and related injuries despite the decrease in travelers. A significant number of those crashes did occur on highways and interstates, according to the Michigan Department of Transportation (MDOT), with nearly 40% of all fatal car crashes occurring on state expressways including, I-96, I-75, and I-94.

Here is a quick look at five of the most crash-prone highways and interstates in Michigan and a recent accident that occurred on each.

I-696 recent accident news: A fiery crash closed down westbound lanes on I-696 in Warren, which required emergency crews to respond to several individuals injured in the wreck.

I-75 recent accident news: Northbound lanes on I-75 in Detroit were recently blocked due to a traffic crash that caused serious injuries after a semi-truck overturned on northbound I-75 near I-96 in Detroit.

I-96 recent accident news: One person was treated for injuries after a rollover crash on I-96 Eastbound by Plainfield exit. The accident brought traffic to a standstill for several hours and triggered additional crashes.

I-94 recent accident news: A Dearborn man was arrested at about 2:30 p.m. January 11, after he allegedly caused a three-car accident on I-94 near Rotunda Drive.

Highway and Interstate Driving Tips to Keep You Safe

Most driving accidents often occur on highways and interstates because drivers are traveling too fast, distracted or impaired, or following the vehicle in front of them too closely. Let’s stay optimistic that we can bring down the highway traffic crashes significantly by following safe driving practices.

Seeking compensation and Michigan no-fault benefits for accident injuries and other losses can be complicated; however, being prepared and knowing what to do after an accident will help.

Take These Steps If Involved in a Highway or Interstate Accident

Exchange information with the other motorist/s. Make sure you take down the license plate numbers, make and model of the vehicles involved. Take photographs and videos of the accident scene, including the vehicle damage for all vehicles involved in the crash and any injuries. This evidence will be useful when the car insurance companies are evaluating your claim or in the case of you being involved in a lawsuit.

Also, read more about staying safe after an accident in the time of COVID.

Even if you don’t appear to be injured, it is essential to be evaluated by a medical professional on the scene and later by a physician. Keep all medical visit summaries and related bills.

Highway driving accidents are quick and tend to happen without warning, and the results are more often fatal or cause severe injuries that many will battle for a lifetime. Michigan safe driving laws, education, and a greater awareness of highway driving dangers can help change the behaviors that make these crashes more likely to occur.

Have You Been Injured in a Michigan Highway or Interstate Accident?

If yes, we don’t have to tell you about the difficulties of recovering from a serious accident or caring for an injured loved one. We know you understand far too well how hard it can be to heal while ensuring your whole family is cared for physically, emotionally, and financially.

The Michigan auto accident attorneys at the Lee Steinberg Law Firm, P.C. understand your situation well, and we have a long history of representing vulnerable clients. Our greatest satisfaction comes from winning or settling a case and knowing our clients’ can rest easier knowing their medical care, lost wages, and other expenses are taken care of.

Also read: What Questions Should I Ask an Attorney About a Car Accident?