I-94 Crash Impact On Michigan Drivers
Skip to content 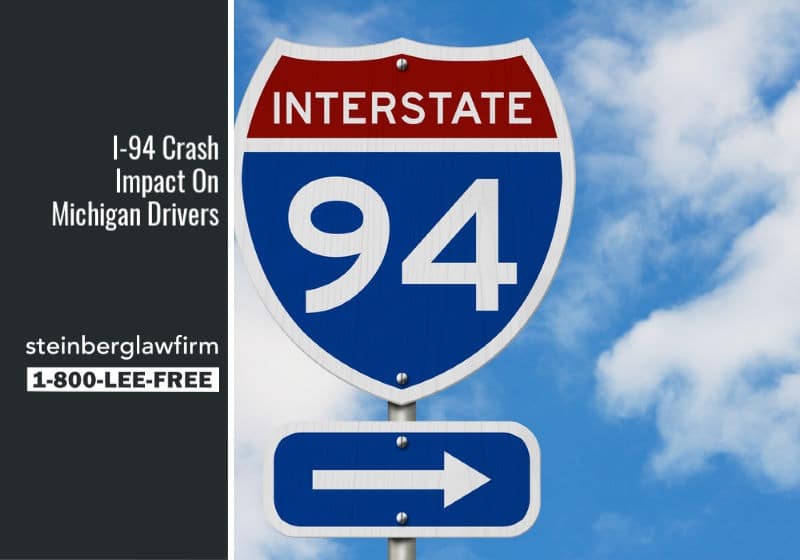 Interstate 94 (I-94) is a major highway connecting Lake Michigan communities and then turning inland toward Kalamazoo and Battle Creek. The well-traveled interstate runs through cities like Jackson and Ann Arbor, before hitting Metro Detroit and moving northeast into rural communities and the Canadian border. So far, in 2020, several accidents have occurred along I-94 stretches, according to Michigan State Police (MSP).

Wayne County: A 12-year-old boy suffered critical injuries during a morning crash on eastbound I-94 in Dearborn in early March. MSP said the boy was a passenger in a 2017 Chrysler 300 that crashed into the back of a semi-truck trailer as it was entering eastbound I-94 from Schaefer Highway. The driver of the Chrysler suffered serious injuries to her legs while the truck driver was not hurt.

Jackson County: After winter weather delivered nearly six inches of snow in late February, evening commuters were stuck on slippery roads as emergency responders, and tow truck drivers came to the aid of those involved in at least 86 minor crashes and slide-offs near I-94 in Jackson. The crashes shut down both east and westbound lanes I-94 at the Cooper Street exit, according to the Michigan Department of Transportation (MDOT).

Washtenaw County: Also, in March, eastbound I-94 east of Ypsilanti township was shut down due to a rollover crash near the Rawsonville Road exit 187. MDOT shut the highway down past the U.S. 12 exit 185.

Kalamazoo County: MSP is still searching for the driver of a black full-size SUV involved in a hit-and-run that struck a pedestrian on I-94 near Kalamazoo on the evening of Saturday, March 7. Police said the pedestrian was crossing the freeway near Sprinkle Road when struck by an SUV headed east.

In Detroit, MSP Metro South Post officials are conducting a traffic initiative each month on I-94 to address Michigan drivers who are operating aggressively, texting and speeding, but also motorists who do not follow Michigan’s Move-Over law. And while I-94 has yet to rank among other Michigan intestate systems such as I-75 and I-96 West as most accident-prone, in 2018, state officials identified a portion of I-94 between Hartford and Kalamazoo as one of the most dangerous stretches of interstate across the state. Using data from November 2017 to March 2018, twice as many crashes occurred here than other spans. MSP says crashes involving semi-trucks are widespread on I-94 in Van Buren County, especially during the winter months.

What You Should Do If Involved in a Michigan Interstate Accident

The first thing to do is to make sure everybody in the car is accounted for and checked on. If a cell phone is nearby, call 911 immediately and wait for the police and medical personnel to arrive. Make sure everybody in your party explains in detail to the authorities;

Exchange information with the other motorist/s. Make sure you take down the license plate numbers, make and model of the vehicles involved. Take photographs and videos of the accident scene, including the vehicle damage for all vehicles involved in the crash and any injuries. This evidence will be useful when the car insurance companies are evaluating your claim or in the case of you being involved in a lawsuit.

Even if you don’t think you are injured, it is essential to be evaluated by a medical professional on the scene and later by a physician. If you need to stay in the vehicle, because you are badly hurt, please do. For some interstate crashes, serious injuries are more likely to occur. Those include:

Besides receiving no-fault benefits, a person injured in a Michigan car accident or truck accident can also obtain compensation for their pain and suffering with a third-party claim.

Working with a Michigan Car Accident Attorney is Important

We don’t have to tell you about the difficulties of recovering from a serious accident or the impact on your life from caring for an injured loved one. We know you understand far too well how hard it can be to heal or be a care-taker while ensuring your whole family is cared for physically, emotionally, and financially. The Michigan auto accident attorneys at the Offices of Lee Steinberg understand these things as well, and we have a long history of representing vulnerable clients.

With offices in Detroit, Flint, Saginaw, and Southfield, we are equipped to meet at a location that is convenient for you and can also use technology to communicate and address your concerns quickly. We know how to navigate Michigan’s no-fault law and regulations and are prepared to represent you against the largest insurance companies and corporations. We are here to protect your rights and help you receive justice.

Our highest satisfaction comes from winning or settling a case, and knowing our clients’ can rest more comfortably when their medical care, lost wages, and other expenses are being taken care of. If you’ve been involved in an accident on a Michigan highway or interstate, contact us today for your FREE consultation or call us at 1-800-LEE-FREE.