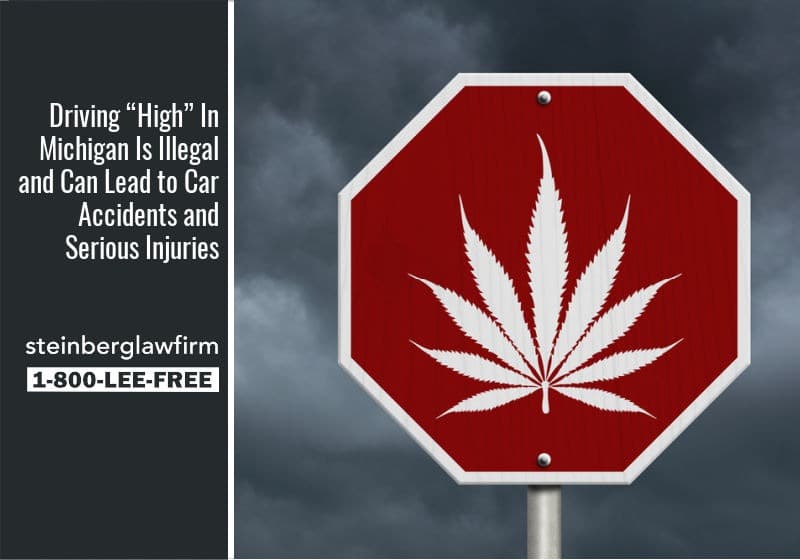 Michigan legalized marijuana for adult use in 2018. Also known as weed, flower, pot, and Mary Jane, more Michiganders are becoming recreational and medical users in the form of hand-rolled cigarettes, consumed as beverages and foods, or as mints, gummies, and treat-like snacks called edibles.

The National Institute on Drug Abuse says a person begins to experience effects almost immediately after smoking marijuana, while at the same time, those who consume it in foods or beverages have a 30 minute to 1-hour delay. Marijuana users tend to experience pleasant euphoria and laughter, or at times anxiety, fear or panic, but people who have taken large doses of marijuana, or mix it with alcohol or other drugs, may experience hallucinations, delusions, sleepiness, and irrational behavior. Studies have also suggested specific links between high marijuana use and adverse consequences, such as increased risk for injury or accidents. Consequently, the GHSA’s Drug-Impaired Driving survey, 43% of drivers tested after a deadly car crash had drugs in their system.

Because of the varied reaction to cannabis in each person, driving under the influence is illegal in Michigan and the state has adopted a zero-tolerance approach to driving while impaired. On June 11, 2020, Gov. Gretchen Whitmer signed into law Senate Bill 718. The law supports mobile roadside drug testing for all Michigan drivers presumed to be impaired by drugs like marijuana. The bill amended a section of the Michigan Vehicle Code — which authorized roadside testing pilot programs in November 2017 to Berrien, Delta, Kent, St. Clair, and Washtenaw counties. The test is administered by Certified Drug Recognition experts, usually, Michigan State Police Troopers or other law enforcement officers with special training.

The roadside test uses saliva to detect the presence of:

Drugs can alter a driver’s perception, attention, balance, coordination, reaction time, and skills needed to stay alert and safe on the road. Once any level of these drugs is detected in the bloodstream, authorities have the right to consider charges of driving under the influence.

Some drivers who are on pot or marijuana products are just as dangerous to other road users as those who use alcohol or even certain prescription medications due to a slowed reaction time, impaired judgment of time and distance, and decreased coordination. When a low-dose of alcohol and low-dose drug are combined, impairment is much more disruptive than either used alone.

Drivers who have used cocaine or methamphetamine can be aggressive and reckless when driving. Certain kinds of prescription medicines, including benzodiazepines and opioids, can cause drowsiness, dizziness, and impair cognitive functioning (thinking and judgment). All of these effects can lead to vehicle crashes, according to the National Institute on Drug Abuse.

While not a true belief, almost half of cannabis users think it’s safe to drive when you’re high, says AAA Michigan. In fact, THC, the psychoactive ingredient in cannabis, has been proven to impair a person’s levels of attention and their perception of time and speed. If you use marijuana in Michigan, for recreational or medicinal use, be better prepared for safe driving with these tips.

If you’ve been hit by another driver who was high on drugs, gather the evidence, get checked out by a doctor to assess any possible injuries, and speak with an attorney about your options. Proving negligence in your case is likely because it’s illegal to drive high in Michigan, but having a legal team with the resources and experience can ensure your case is handled correctly from the start.

We understand that proving another driver’s wrongdoing due to their drug impairment might seem difficult, but we have the required expertise in these types of crash investigations and remain highly successful in holding “high” drivers accountable for their actions.

And with our ability to serve clients all over Michigan and offices in Southfield, Flint, Saginaw, and Detroit, the Lee Steinberg Law Firm, P.C. can meet you when you need us most. Contacting us is free, and there are no fees or costs until we win your case. If you have any questions, please call us at 1-800-LEE-FREE (1-800-533-3733).

Also read: Drugged Driving Incidents are Increasing in Michigan and Across the Nation

Video transcript
Driving under the influence of marijuana is illegal. You are allowed certain amount. They are finalizing the rules on this, or really have finalized the rules. Governor Whitmer just signed into law Senate Bill 718, which clarifies a statewide pilot program for roadside drug testing for drivers. This was a pilot program that began about two years ago. They have now activated a test that can be used by certified drug recognition experts, usually Michigan State Police or a certain law enforcement officer who can administer a test.

This test is, it’s called a SoToxa mobile test system. It’s literally like a little device with a cartridge that they’ll have you blow into. It can read the amount of drugs that are in your system, and that will be used against you in a criminal matter. It can detect the presence of cannabis, cocaine, meth, opiates, a wide variety of different drugs.

It’s legal in the state, but we’re not allowed to drive drunk and we’re not allowed to drive high. If you’re going to use, don’t drive. They are going to throw the book at you criminally. There is zero tolerance for this, from what I have seen and heard, with a lot of the judges in the state. If you’ve been hit by somebody who was high, give us a call. You have a great negligence case. You have a great case for compensation potentially, because it’s illegal to drive high. And we look forward to speaking with you. If you have any questions, just give us a call at 1-800 [inaudible 00:01:40] .