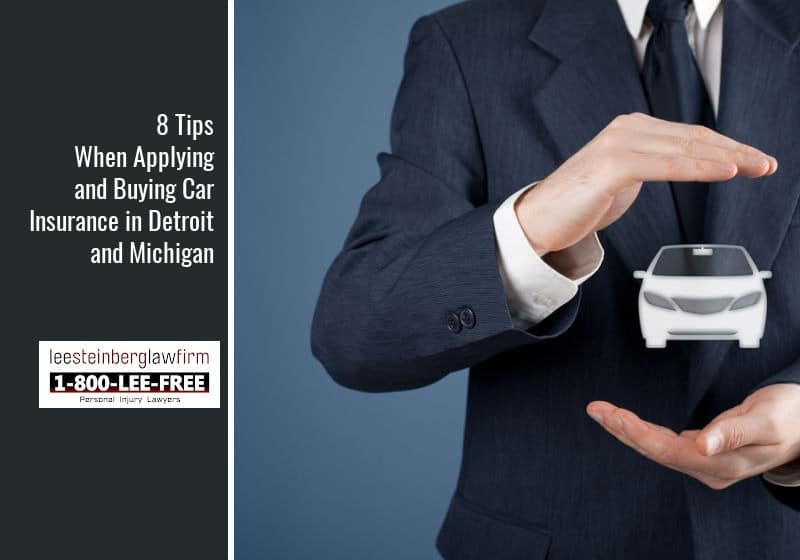 Auto insurance companies in Detroit and Michigan will use any tool in their tool kit to get out of paying a claim. One of the main ways they now use is to deny a case is by claiming fraud. A common allegation of fraud includes alleging the auto insurance application has material mistakes. And under the law, the car insurance companies can use these mistakes to delay, deny and then defend a claim it would otherwise have to pay.

Below are 8 tips to think about when applying for car insurance in Michigan.

#1 – Make Sure the Address of the Vehicle Matches the Application

This is extremely important. The address for where the car will stay overnight must match the insurance application. In insurance language, where a vehicle lives is a called its garaging address.

Failing to list the proper address for where the vehicle is located can result in the insurance company voided or rescinding the insurance if a claim is made following a crash or collision. This can make the difference in getting the benefits of the insurance coverage – such as the payment of medical bills, lost wages, and car repairs – or getting nothing.

Misrepresenting the garaging location of a car occurs more often than you would think. More than 10% of auto insurance policies have garage address defects. This includes misstating a zip code.

The reason car insurance carriers like Progressive and State Farm care about the garaging address of a vehicle is that the location of the car and its zip code impacts the risk of insuring that vehicle. If a car is located in an area with an increased risk of car accidents or theft, then the insurance premium will be higher.

Insurance companies are using sophisticated tools, including artificial intelligence, to track vehicles and record their locations. The technology integrates with the vehicle’s cellular modem and retries the car or truck’s actual location. They can verify a vehicle’s location every few days during overnight hours.

Although this may sound very Big Brother, the insurance company can use this technology as evidence to deny a claim and assert fraud or misrepresentation after a crash.

Don’t let this happen to you.

It is important to list everyone who is staying in the household at the time of application. This includes children. The more information the insurance carrier has, the less likely they can deny the claim later.

Insurance companies are more aggressive than ever in alleging material misrepresentation and fraud after a car accident occurs. Don’t let the insurance carrier get out of paying your bills and pain and suffering simply because you forgot to list all the individuals living in the household when the policy was purchased.

#3 – Be Truthful about Your Driving Record

Don’t lie about your driving history. If the application asks if you have ever had your license suspended or revoked, and the answer is yes, then answer yes in the application.

In addition, tell the truth about your driving record, including tickets, points and prior car accidents. If the application asks you about tickets or citations you have previously received, don’t hide from this. Also, don’t lie or forget about car accidents.

In 21st Century Premier Insurance Company v. Zufelt, 889 N.W.2d 759; 315 Mich. App. 437 (2016), Mr. Zufelt was injured in a car crash he caused. He turned to his insurance company, 21st Century, for the payment of medical bills that exceeded $600,000. He also relied upon his car insurance carrier to pay his claim when the other driver sued him for pain and suffering.

21st Century filed a lawsuit against their own policyholder, Mr. Zufelt, to get out of paying the claims. 21st Century alleged that Mr. Zufelt when applying for the policy, he failed to disclose the proper number of points he had on his record from a prior accident. At the time he applied for auto insurance, he had 7 points. 21st Century claimed it does not issue policies to individuals with more than 6 points.

The Michigan Court of Appeals held that 21st Century was correct in rescinding Mr. Zufelt’s policy because he had made a material misrepresentation when he provided false information during the application process.

The Court said that 21st Century did not even have to prove Mr. Zufelt intentionally misrepresented the number of points he had when he took out the policy. Instead, all that was necessary for rescission was a misrepresentation, failure to disclose, or a false statement, all of which were present in this case.

The insurance company relied on Mr. Zufelt’s misrepresentation when it determined he was eligible for the insurance policy. Had he disclosed the earlier car accident, he would have been unable to obtain the insurance policy. Therefore, given the plain language of the policy, after discovering the nondisclosure, 21st Century had the right to rescind the policy and deny coverage.

Better yet, make the drivers of a vehicle the “named insured” on the policies. The named insured is the person, business or entity that purchased the insurance policy. They hold special rights under the policy in that they are entitled to all the coverages that were purchased.

Most insurance carriers allow additional named insureds. This allows not only the policyholder to have all the protections the policy covers, but other individuals as well. Typically, a co-owner of a vehicle or a person who has regular use of a vehicle should be a named insured.

Being a named insured is important because it helps that person easily obtain Michigan no-fault benefits. Under the law, an auto insurance carrier must provide PIP benefits – such as the payment of medical bills and lost wages – to the named insured found on the policy. MCL 500.3105 and MCL 500.3114.

For drivers who are not named insureds, and are not related to the named insured, the situation gets much trickier. In those situations, the injured driver may have to go through the Michigan Assigned Claims Plan to make a PIP claim. This can take months and make the difference in getting your bills and wages paid – or not.

Until 2020, all Michigan automobile insurance policies had unlimited PIP coverage. This meant that the auto insurance carrier that insured the injured person, his or her resident relatives, and even passengers inside that vehicle, had to pay all medical bills related to the car or truck accident that health insurance would not cover. There was no limitation. For example, if someone was catastrophically injured and had a $1,000,000 in medical bills, the auto carrier had to pay those bills.

This all changed in July 2020. Beginning then, policyholders could select the amount of PIP coverage they wanted. Unlimited PIP coverage is still offered, but so are other PIP limits. They include $500,000 and $250,000.

Certain individuals on Medicaid can get select only $50,000 in PIP coverage. Under the law, others can opt-out of PIP coverage entirely if they have “qualified health coverage.”

Qualified health coverage means either coverage under both Medicare Parts A and B, or health and accident coverage that does not exclude or limit coverage for injuries related to auto accidents and has an annual individual deductible of $6,000 or less.

It is important to adequately protect yourself and your family. Don’t ever select anything less than $250,000 in PIP coverage. The risk of severe injury due to a Michigan car accident is too great. And private health insurance, as well as Medicare or Medicaid, offer much less in medical treatment coverage compared to no-fault.

Bodily injury coverage, or BI coverage, covers you or anyone driving your vehicle if they cause personal injury to others from a car accident. In simple terms, BI coverage is what protects you if you get sued for causing a crash.

BI insurance also pays for a lawyer to represent you in the lawsuit and for an insurance adjuster to handle your claim.

If you wish to select a minimum coverage amount, you can do so in the application by signing a form provided by the insurance carrier. Under MCL 500.3009(7), this form must do all of the following:

(a) State, in a conspicuous manner, the risks of choosing liability limits lower than those required by subsection (1)(a) and (b).

(b) Provide a way for the person to mark the form to acknowledge that he or she has received a list of the liability options available under this section and the price for each option.

(c) Provide a way for the person to mark the form to acknowledge that he or she has read the form and understands the risks of choosing the minimum liability limits.

The lowest amount of BI coverage a person can select is $50,000 per person or $100,000 per accident. However, we strongly recommend against selecting this low level of coverage.

First, $50,000 doesn’t cover much anymore. Medical bills now easily run into six figures and you can he held responsible for those bills if you cause the crash. Second, medical bills are separate from pain and suffering. If you or a person driving your vehicle is negligent in causing the crash, they are also on the hook for the pain and suffering they created. As you probably know, this can be a large amount of money.

Last, purchasing additional BI coverage is not expensive in the grand scheme of things. It is important to shop around when buying car insurance in detroit. Often the expense of going from $50,000 to $100,000 in bodily injury coverage is not much.

#8 – Be Careful About Excluding Drivers

If you are going list someone as an excluded driver on the policy, make sure they never use that vehicle. If they do, the law can void their claim.

Under MCL 500.3113, a person is not entitled to be paid personal protection insurance benefits for accidental bodily injury if at the time of the accident any of the following circumstances existed: …

(d) The person was operating a motor vehicle or motorcycle as to which he or she was named as an excluded operator as allowed under section 3009(2).

This section means if a person is an excluded driver on the insurance policy, and is involved in an accident, that person cannot make a claim for PIP benefits, including the payment of medical bills, lost wages and out-of-pockets costs that result from injuries due to the car accident.

This is a large penalty and leaves the excluded driver with potentially financially crippling medical bills.

If you have any questions about purchasing auto insurance, and in particular completing the full coverage car insurance application, give our office a call. Our team of Detroit car crash attorneys are here to answer your questions. The call is free and so is the consultation. Call us today at 1-800-LEE-FREE (1-800-533-3733).