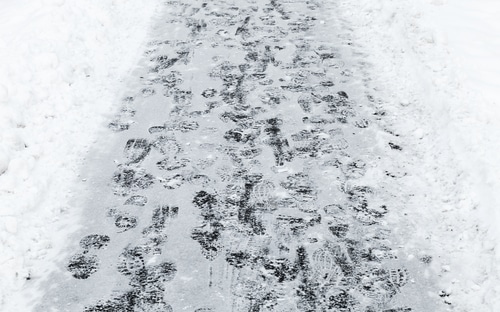 Michigan Landlord-Tenant Law – A Win for the Injured Party

The Michigan Court of Appeals issued an important ruling on landlord-tenant personal injury cases. The case, Estate of Daniel Trueblood v. P&G Apartments, LLC, (docket no. 340642 published on 3/12/2019), could have far reaching implications as it may allow injured tenants to pursue cases for pain and suffering and lost wages that they could not before.

In the case, a tenant slipped-and-fell on the walkway right outside his apartment complex, resulting in a low back injury. The tenant resided in Wyandotte in Wayne County. It had recently snowed at the time of the fall. An expert retained by the plaintiff prepared a report showing there was over 3 inches of snow in the area where plaintiff fell. Further the expert stated there was a significant layer of ice covered by snow in that area as well.

The defendant landlord testified he did his own maintenance, including snow removal and salting for the complex. He also testified another individual would help him at times if needed. The landlord testified he was at the plaintiff’s apartment the night before the fall and salted the walkways and parking lot. He also said he and his helper came back the next morning, about two hours before the fall, and snow-plowed and salted some more.

The plaintiff disputed this account, testifying nobody came to the complex to removal ice or snow. Another tenant testified there was no salt anywhere on the property the day of the fall. A third tenant testified, also saying that the landlord absolutely had not salted before the plaintiff fell and she did not see the landlord or anyone else applying salt or plowing the premises the night before he fell.

After Mr. Trueblood fell outside the complex, a co-tenant went outside to help him. He testified the sidewalk was slippery and that there was a thin layer of snow with ice underneath.

The plaintiff filed a lawsuit against the landlord, alleging two counts. The first count alleged a violation of statutory duties the landlord has towards a tenant like Mr. Trueblood. The second count alleged basic premises liability.

This case is important for its decision on the first count as it may have important implications for how trial courts will decide landlord-tenant injury cases throughout Michigan.

Do I have a Landlord-Tenant Injury Case?

Under Michigan law, a landlord has certain responsibilities and duties to a tenant. MCL 554.139 states in part:

(1) In every lease or license of residential premises, the lessor or licensor covenants:

(a) That the premises and all common areas are fit for the use intended by the parties.

(b) To keep the premises in reasonable repair during the term of the lease or license, and to comply with the applicable health and safety laws of the state and of the local unit of government where the premises are located, except when the disrepair or violation of the applicable health or safety laws has been caused by the tenants willful or irresponsible conduct or lack of conduct.

The first section means a landlord must keep all common areas fit for their intended use. For example, a common area, like a walkway leading to and from an apartment complex must be fit for its intended use, which is walking upon it.

The defendant naturally argued otherwise. First, the landlord said there was no evidence the walkway was icy. Second, he argued other tenants and emergency personnel who responded to plaintiff’s fall did not slip and fall on the ice, which established that other people were able to use the sidewalk for its intended purpose.

But the Michigan Court of Appeals held there was a question of fact as to whether the landlord did breach his duty of care to the plaintiff by failing to keep the walkway fit for its intended use.

Why Does This Michigan Court of Appeals Ruling Matter?

This decision by the Michigan Court of Appeals is extremely important. There have been very few favorable rulings for plaintiffs in slip-and-fall cases over the last 15 to 20 years.  Even with the statutory protections afforded to tenants, landlords have often been able to get cases dismissed by trial judges using a litany of defenses – like the open and obvious defense – to defeat a claim.

This case does the opposite and allows a jury to hear evidence that the landlord failed to properly maintain his or her apartment complex and keep it safe. The Court here did not automatically impose liability on the landlord. But it does the allow the plaintiff to go forward with his case.

The case is also important because it also held that local regulations and ordinances can be used by a plaintiff to demonstrate a landlord breached his or her duty of due care to a tenant.

In the Trueblood case, there is a Wyandotte ordinance which requires that “steps, walks, driveways, parking spaces and similar paved areas shall be maintained so as to afford safe passage under normal use and weather conditions.” The Court here held that the landlord in this case not only has to meet the statutory duty imposed by MCL 554.139(1)(a), but must also meet the duties imposed by the local Wyandotte ordinance. A failure to do demonstrates a breach of duty by the landlord and negligence on his part.

If you have any questions about a personal injury that occurred while you were a tenant, or about landlord injury negligence in general, please call Lee Steinberg, P.C. at 1-800-LEE-FREE (1-800-533-3733). There is no fee unless we win your case and our dedicated team of landlord-tenant personal injury attorneys are here to assist.