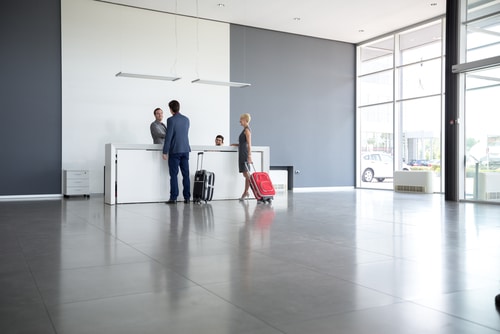 Winning a Michigan slip and fall case is not easy. Property owners have a slew of defenses they can use to get even “easy cases” dismissed. One would think that a property owner should have a responsibility to keep their premises in reasonable condition and maintain a safe environment for their guests.

But this is really not true here in Michigan. And this truth was evident yet again in another Michigan Court of Appeals case that upheld a dismissal of a lawsuit in Saginaw County involving a child injured in a slip-and-fall accident.

In McFee v. Baymont Inn & Suites (docket no. 341740, unpublished 12/11/2018), a child visiting from out-of-state slipped and fell while walking into the hotel he and his family were staying at during a Thanksgiving holiday. After returning to the hotel, the family proceeded to walk towards the hotel’s front entrance. The hotel’s main entrance is located underneath an overhang with one set of automatic sliding doors leading to a vestibule, with a second set of sliding doors leading into the lobby.

After passing through the first set of sliding doors, the boy slipped and fell on a puddle of clear water on a tile floor. Nobody saw the puddle of water until after the fall occurred. The puddle covered approximately one of the floor tiles. There was evidence that when it rains, an area rug is re-positioned to abut against the first set of sliding doors to prevent guests from slipping as they enter. The hotel denied this but did admit that when the floor gets slippery, the hotel staff frequently dry it with a mop and place a wet floor sign near the area.

The Open and Obvious Defense

Despite the fact water is clear and there was no evidence anybody saw the water as they entered the hotel, the trial judge in Saginaw dismissed the case. The family then appealed.

The Court of Appeals took another look at the open and obvious defense. Under the law, the court must take view all evidence in the light most favorable to the plaintiffs. Despite this rule, the Court affirmed the trial court’s ruling and kept the case dismissed.

In doing so, the Court said that three different individuals were readily able to observe the puddle of water after the boy fell. In addition, nobody stated they couldn’t see the water before the fall, just that they weren’t looking in that direction. As such, the water may have been visible as the boy was walking boy, thereby making it open and obvious.

Problems with Open and Obvious

But this type of analysis is puzzling given the fact by definition, a defect is open and obvious only if it’s discovered upon “casual inspection.” Casual inspection does not mean perfect attention. Yet, according to Michigan’s Court of Appeals, if a person could have seen the water on the floor while staring directly at it, then its open and obvious and the property owner has no liability.

But is this how life works? Who actually is looking down at the floor when walking? The law in Michigan does not allow for any distractions. For example, if you are at a supermarket shopping for dinner, and you slip on a grape or some object that should have been cleaned up while staring at the top row looking for an item, you are still at-fault for not seeing that object.

Call a Firm That Cares

It’s my hope that the open and obvious rule is reviewed more thoroughly by trial judges and appellate judges in Michigan.

The defense has been used by defendants and their insurance companies to torpedo what would be viable cases in almost every other state in this country. The defense rewards bad behavior. It also passes the costs of medical care and time off work onto the rest of society.

If you have any questions, please call the Saginaw slip-and-fall injury attorneys at Lee Steinberg, P.C. The phone call is free at 1-800-LEE-FREE and there is no fee unless we win your case.