2020 Crash Statistics All Michigan Drivers Should Know
Skip to content 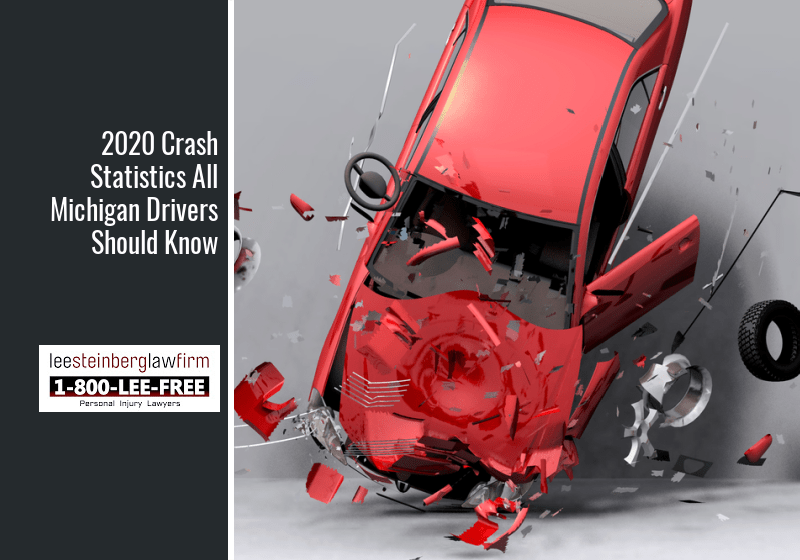 According to the Michigan Department of Transportation (MDOT) and the Michigan State Police Criminal Justice Information Center, 1,083 people died in state traffic crashes in 2020, up about 10% from 2019. The rise came even though there were about 18% fewer people on the road, mainly because of COVID-19 restrictions that kept people home, working remotely, and traveling less.

At Lee Steinberg Law Firm, we work hard to provide a first-hand look at the latest trends that help drivers across Michigan stay more informed about their crash risks. Using the Michigan Traffic Crash Facts database, our attorneys have outlined the most recent findings released for 2020.

7,118,197 licensed drivers were operating on Michigan roads last year, and over 9 million vehicles had registered. There were 245,432 crashes last year, a reduction of around 20% from the year before and the lowest level since at least 2010, according to MDOT.

Populated Michigan Counties with More Than 5K Reported Crashes in 2020

There were 245,432 total traffic crashes last year in Michigan. More than 1,000 people died in traffic accidents in Michigan in 2020, the highest number since 2007, when 1,084 people died. Overall, populated Michigan communities with more than 5,000 total crashes for 2020 included:

MDOT will release individual county profiles and enhanced crash density maps in mid-July 2021. Please stay connected with our blog and social networks for the latest on that information as it is published.

In a May 26, 2021 press release, Michael L. Prince, director of the Michigan Office of Highway Safety Planning, said, “Even though there was a dramatic drop in traffic crashes and injuries during 2020, there was an unfortunate surge in fatalities.” Prince also said the new trend in fatalities could indicate a rise in crash “severity,” which may indicate reductions in seat belt use, increases in impaired drivers, and alarming reports of speeding motorists.

It’s Not Too Late to Seek Legal Counsel

We understand that proving another driver’s negligence can feel like a lot of work. It’s always in your best interest to meet with an attorney before discussing your settlement, making a deal, or accepting a meeting with an insurance adjuster or another person’s legal team. If you are beyond that point, an attorney can still be useful. This is especially true when Michigan car insurance carriers aggressively deny a claim and refuse to pay Michigan No-Fault benefits by alleging fraud or material misrepresentation.

Were You Recently Injured in a Michigan Car Accident?

If you were injured in a car, truck, or pedestrian accident in 2020 or more recently, the Michigan car accident attorneys at Lee Steinberg Law Firm are prepared to help. We have represented auto accident victims, motorcycle accident victims, and pedestrians injured by drivers for over 40 years. Please call to speak to one of our experienced Michigan personal injury attorneys at 1-800-LEE-FREE (1-800-533-3733) as soon as you are ready. And remember, you pay nothing until we settle your case.

Also read: Detroit Hit-and-Run Car Accidents, What to Do Next