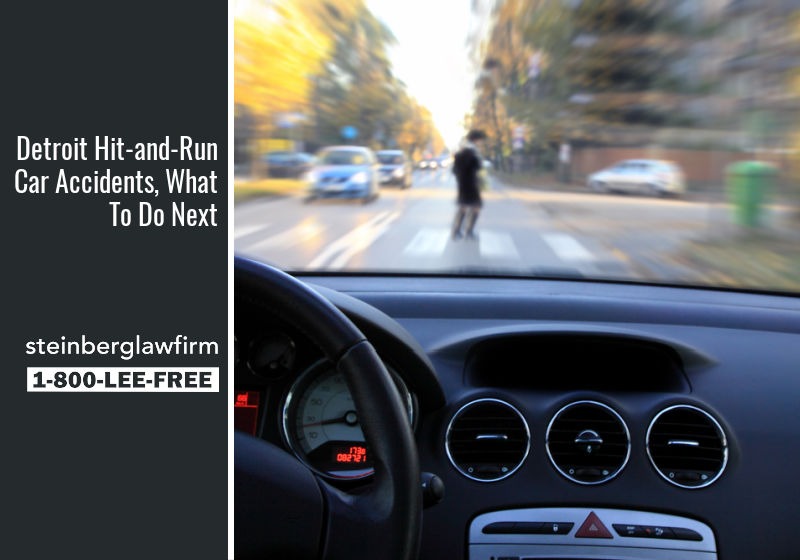 What Should I Do If Injured in a Hit-and-Run in Detroit, Michigan?

Any time you are involved in a car or truck crash as a motorist, pedestrian, or bicyclist, it is likely to be a scary and frustrating experience. This is especially true when the driver responsible speeds away from the scene in a tragic situation better known as a hit-and-run. According to Michigan Traffic Crash Facts, in Detroit, hit-and-run car accidents have alarmingly increased as much as 40% since 2014, impacting drivers but also pedestrians. In fact, from 2009 thru 2016, the percentage of hit-and-run pedestrian crashes in Detroit was as high as 46%, compared to 18% nationwide.

In 2018, the Detroit Free Press reported on the most concerning areas in the city with exceptionally high hit-and-run crashes, which included:

The Governors Highway Safety Association launched a report in early 2021 showing that pedestrian fatalities, some related to hit-and-runs, across the country increased by 20% during the pandemic, despite fewer drivers on the road. And excessive speed was the preferred choice among the worst pandemic drivers. In some of the most traveled Detroit intersections and roadways, police say average speeds increased by as much as 25%.

How Does Insurance Work in a Hit-and-Run?

Under most insurance policies, a hit-and-run occurs when the operator and owner of the vehicle that caused the accident can’t be identified. In other words, the license plate number and the identity of the vehicle involved in causing the car wreck remain unknown.

To better understand, here’s a look at Michigan hit-and-run law according to the state’s vehicle code:

(1) The driver of a vehicle who knows or who has reason to believe that he has been involved in an accident upon public or private property that is open to travel by the public shall immediately stop his or her vehicle at the scene of the accident and shall remain there until the requirements of section 619 are fulfilled or immediately report the accident to the nearest or most convenient police agency or officer to fulfill the requirements of section 619(a) and (b) if there is a reasonable and honest belief that remaining at the scene will result in further harm. The stop shall be made without obstructing traffic more than is necessary.

(2) If an individual violates the requirements of subsection (1) and the accident results in damage to a vehicle operated by or attended by any individual, the individual is guilty of a misdemeanor punishable by imprisonment for not more than 90 days or a fine of not more than $100.00, or both.

Even worse, if someone was killed in a hit-and-run crash and found negligent, the driver could face charges such as reckless driving causing death and failure to stop at the scene of an accident when at fault resulting in death.

Michigan no-fault law and Michigan car accident law, in general, says when a person is injured in a car or truck accident, benefits such as medical bills, lost wages, medications costs, and other items are paid by your own car insurance company. So even if a hit-and-run driver causes a crash, your own insurance company provides benefits.

What If an Uninsured Driver Hit Me in Detroit?

Unfortunately, at least 20% of car owners in Michigan do not carry mandatory auto insurance, with the numbers much higher in Metro markets like Detroit. It’s estimated by major providers such as Allstate and Progressive that almost half of all Motor City drivers do not have auto insurance on their vehicles. This does make it difficult but not impossible to receive compensation for injuries resulting from a hit-and-run. Most of the time, those responsible who have not maintained car insurance can still claim through the insurance carrier of a relative they live with or through the Michigan Assigned Claims Plan process.

We understand how confusing Michigan car accident and insurance laws, including no-fault, indeed are. However, we always suggest injured parties contact an experienced and aggressive car accident lawyer in Detroit as soon as you can following the crash for a free consultation. Time and the need for evidence collection are always of the essence following any type of accident, especially hit-and-runs. A lawyer can advise you on what exactly you need to do, handle insurance provider calls and requests for recorded statements, identify witnesses, gather the best photo and video surveillance evidence and access police reports, support medical treatment, billing, and claims, and help build a potential case that will result with the best chance of your recovery.

Also, if you witness a Detroit hit-and-run crash, it is more than likely police need your help. Anyone with information about these types of crashes is asked to call Detroit Police Department’s Fatal Squad Precinct at 313-596-2260 or Crime Stoppers at 1-800-Speak Up.

Have You or a Loved One Been Involved in a Detroit Hit-and-Run Crash?

The law is confusing, the stakes are high, and every case is different, so it doesn’t hurt to call a Michigan car accident injury lawyer immediately after a hit-and-run crash. And when it comes to obtaining uninsured motorist benefits, Lee Steinberg Law Firm has helped motorists, passengers, and pedestrians all over Michigan collect millions. So please call to speak to an experienced Michigan accident attorney at 1-800-LEE-FREE (1-800-533-3733) as soon as you are ready. And remember, you pay nothing until we settle your case.