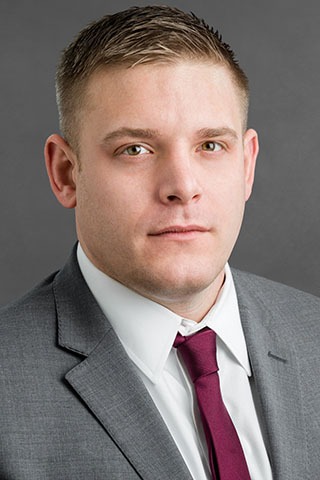 Chris Gatza completed his undergraduate studies at Michigan State University where he received his bachelor’s degree in Political Science. He then attended law school at the Michigan State University College of Law. While in law school, Chris served as a guardian ad litem, where he acted as an independent voice for his client’s interests, with the Ingham County Probate Court. Chris received his Juris Doctorate Degree in 2014 and graduated in the top five percent of his class.

After Graduating Law School, Chris worked as an operations director and legal compliance coordinator for a holding company, whose primary focus was in the Bakken Oil field. In 2015, he was admitted to the State Bar of Michigan.

Chris joined the Law Offices of Lee Steinburg, P.C. in 2016. Since entering the practice, Chris has focused on first and third-party no-fault automobile negligence cases and general negligence claims.  He is particularly adept at reviewing medical records, allowing him to thoroughly understand the claims involved in each case and to effectively advocate the extent of a plaintiff’s claimed injuries before mediators and case evaluation panels.

Outside the office, Chris fuels his competitive nature by playing basketball and rooting for his Michigan State Spartans.