Is Jaywalking Illegal in Michigan? Know At 1800 Lee Free
Skip to content 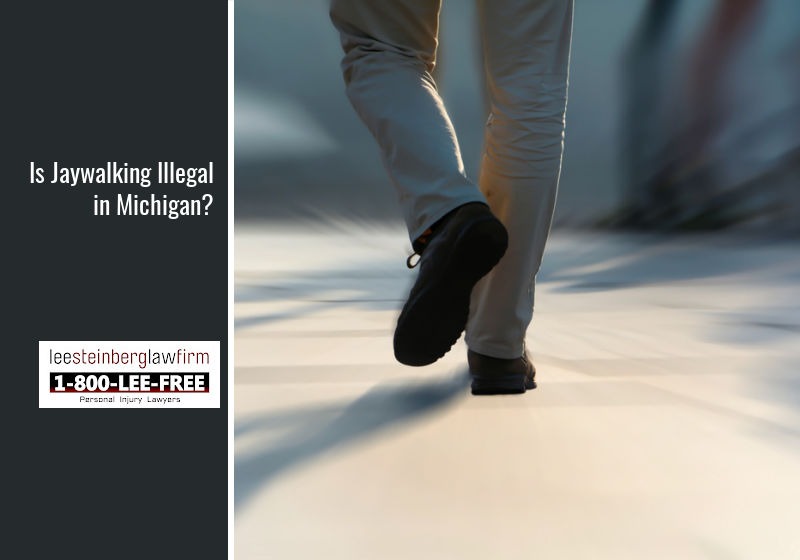 If you are a driver who hit a pedestrian that was jaywalking or if you are the pedestrian who was hit, you may be wondering who is the one at fault, and thus responsible for the accident.

When dealing with cases like this, determining who is at fault will generally depend on whether or not the pedestrian was jaywalking. Technically, jaywalking is illegal in Michigan.

However, other factors will be taken into consideration besides the jaywalking to ultimately determine who is responsible for the accident.

If you were involved in a jaywalking accident, whether as the driver or as the pedestrian, one of our Michigan pedestrian accident attorneys can assist you. We can review your case and help you determine the best course of action to ensure the right party is held accountable.

Jaywalking is a term used to describe a pedestrian who crosses the street or walks in the road in a non-designated area or wherever else they are not permitted to do so. In most states, jaywalking is illegal, and if a person is found to be jaywalking, they can be cited with a civil infraction.

So, is jaywalking illegal in Michigan? The simple answer is yes.

However, things can get more complicated when an accident happens involving a pedestrian who was jaywalking. Even though jaywalking is illegal, who is at fault for the accident can depend on various other factors. The pedestrian is not automatically at fault just because they were jaywalking.

To help you better understand how this works, let’s take a look at jaywalking laws in Michigan.

Pedestrians are not allowed to walk on the road if a sidewalk is provided. If a sidewalk is not provided, pedestrians can walk, when practicable, on the left side of the road facing the direction of oncoming traffic.

Pedestrians also have the right-of-way if they are crossing the road in a designated area or crosswalk when legally permitted to do so.

However, it’s important to note that drivers also have rules to follow where pedestrians are concerned. They must yield to pedestrians that have the right-of-way, and even if a pedestrian is jaywalking, drivers are supposed to do everything they can to not hit the pedestrian.

If there is an opportunity to avoid hitting a pedestrian, the driver must take it. If they do not, they could be held liable for the accident.

Who is At Fault if a Pedestrian Gets Hit When Jaywalking?

So, how do you determine who is at fault when the pedestrian was jaywalking?

If a driver did everything within their power to avoid hitting a pedestrian and an accident still occurs, it will likely be the pedestrian who is found negligent and at fault. However, if the driver is even the tiniest bit negligent, even if the pedestrian was jaywalking, the driver could be held liable.

For example, if the driver had plenty of time to slow down to avoid hitting the pedestrian, they could be held liable. If the driver was distracted, took their eyes off the road, or was speeding, they can also be held responsible for hitting a jaywalking pedestrian.

Drivers are also required to pull over when they hit someone. So, if they drive away after hitting a jaywalker, they can be held responsible. A driver can also be at fault if they were drinking and driving or driving recklessly in any other manner.

Determining fault after a jaywalking accident can be tricky. It requires gathering a sufficient amount of evidence to show what happened. And even with the evidence provided, it is not uncommon for insurance companies to find other ways to deny claims or offer reduced settlements. No matter the situation, it is always best to work with an attorney who can help you provide evidence and stand up for your rights to ensure the right party is held accountable.

Call our Michigan pedestrian accident lawyers at 1-800-LEE-FREE (1-800-533-3733) or contact us online. Our team knows the answer to your questions, including, “Is jaywalking illegal in Michigan?” Our consultations are free and confidential, and you’ll pay nothing until we settle your jaywalking case.