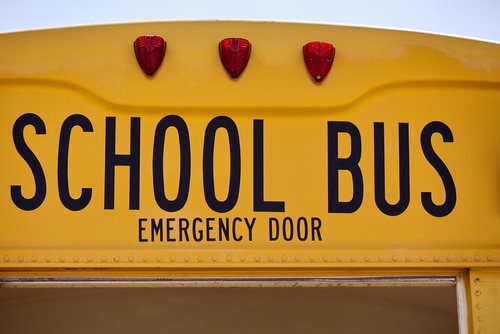 All of us at the Lee Steinberg Law Firm were saddened to hear a 37-year-old mother-of-three had died after the Buick Century she was driving crashed with a school bus in Macomb County. Authorities have been able to confirm that the woman lost control of her sedan as she was traveling northbound and crossed into oncoming traffic, an area where there is also a sharp curve, and then collided with a school bus carrying middle-school and high-school aged children. It is believed the bus struck the car broadside. The bus driver was taken to a hospital with minor injuries, but the students were not injured. The crash happened during the early morning school pick-up hours, on North Avenue near 28 Mile Road.

“I have to tell you that North Avenue is notorious for these kinds of accidents over and over again,” Macomb County Sheriff Tony Wickersham said in several news reports. Although some questions have been answered, like the driver was wearing her seat belt, the crash remains under investigation.

Most current statistics from the National Highway Traffic Safety Administration conclude from 2006 to 2015 there were 1,313 people of all ages killed in school- transportation-related crashes, an average of 131 fatalities per year. That’s less than one percent of all traffic fatalities nationwide. Most of these fatalities, nearly three-fourths, are people in other vehicles or pedestrians, mostly children, who are struck when they are exiting the bus to cross traffic. It is rare for a child riding on the bus to be the one injured. This is because school buses are just tougher, bigger, and more diligently maintained than ever before, often leaving anything they may collide with in an irreparable state. For the more than 25 million schoolchildren who ride the 480,000 school buses each day, parents should know their children are much safer taking a bus to and from school than traveling by car, riding their bike, or walking.

In Michigan, all vehicles must stop no less than 20 feet from a stopped school bus displaying alternately flashing red lights, unless driving in the opposite direction on a divided highway. A driver may not proceed until the school bus has resumed motion or the visual signals are no longer actuated. Here are a few other school bus safety tips for drivers:

Regardless of the cause, victims of car accidents are entitled to Personal Injury Protection (PIP) benefits, also known as first-party benefits, under the Michigan No-Fault Law. The Lee Steinberg Law Firm can help.

If your or your child has been injured in a school bus accident, the vehicle accident attorneys at the Lee Steinberg Law Firm are ready to use our decades of experience to get justice so your family can move forward and start the healing process. Not only can a personal injury lawsuit help ease financial burdens on your family, but it can help create change in a system that poses serious dangers to other kids every single day. Please call and speak to our car accident attorneys at 1-800-LEE-FREE (1-800-533-3733) or fill out the Free Case Evaluation Form.