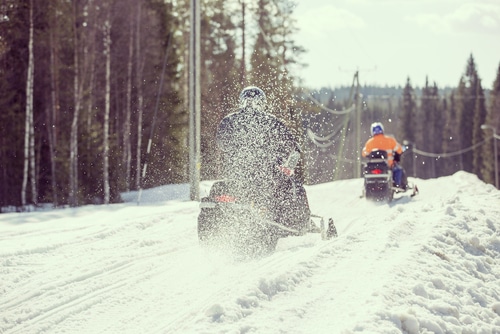 Snowmobile accidents in Michigan occur every winter throughout the state. Oftentimes, they involve the use of alcohol or drugs, as riders negligently mix good fun with bad decision making. When this happens, horrible accidents can occur.

In Cadillac, Michigan in January 2015, such a snowmobile accident did occur. And last week, the Michigan Court of Appeals held that the passenger of a snowmobile operator could proceed with her lawsuit for compensation against the snowmobile driver and its owner.

The plaintiff filed a lawsuit against the owner and driver of the snowmobile claiming violations under the Natural Resources and Environmental Protection Act, which covers the proper operation of snowmobiles. Specifically, the plaintiff alleged the driver had operated the snowmobile in a “careless and negligent manner” in contravention of MCL 324.82126(1)(a). The plaintiff also alleged negligence against the owner of the snowmobile under MCL 257.401 (the owner’s liability statute) and MCL 324.82127, which prohibits an owner of a snowmobile from knowingly permitting a defendant to operate a snowmobile while under the influence of alcoholic liquor or a controlled substance, or both.

The defendants filed a motion with the trial court to dismiss the claims, arguing the plaintiff could not determine how the defendant driver was negligent in operating the snowmobile, did not provide enough evidence to show the operator was legally drunk when driving at the time of the accident, and further she assumed the risk of engaging in inherently risky snowmobiling activity. The trial court agreed and dismissed the case, The plaintiff then appealed.

The Court of Appeals reversed the trial judge’s dismissal of the case. In doing so, the Court found the record was replete with evidence showing genuine issues of material fact that the driver of the snowmobile operated it in a negligent and careless manner. First, the plaintiff testified the driver had been drinking and smoking marijuana in the time leading up to the accident. The owner of the snowmobile backed up these allegations. In addition, in the moments leading up the crash, there was testimony the driver had increased his speed and was driving erratically. As a result, a jury could find the defendant negligent for the accident that caused the plaintiff’s injuries.

This case is a win for snowmobile passengers involved in snowmobile crashes in Michigan. Based on the facts presented, this writer thinks the trial judge should have never dismissed this case to begin with. There was ample evidence from even the co-defendant that the operator of the snowmobile had been drinking and smoking pot before the accident. There was evidence he was driving the snowmobile way too fast for the conditions and in an erratic fashion.

Fortunately, the Court of Appeals also saw this way. Now the plaintiff, who sustained some very bad injuries, will be able to take her case to a jury.

If you have been injured in a snowmobile accident in Michigan, call the law firm with over 40 years of experience and let the Lee Steinberg Law Firm assist in getting your life back on track.  Our injury lawyers will help you get the compensation you are entitled to and there are no fees until we win or settle your case. Call 1-800-LEE-FREE (1-800-533-3733)