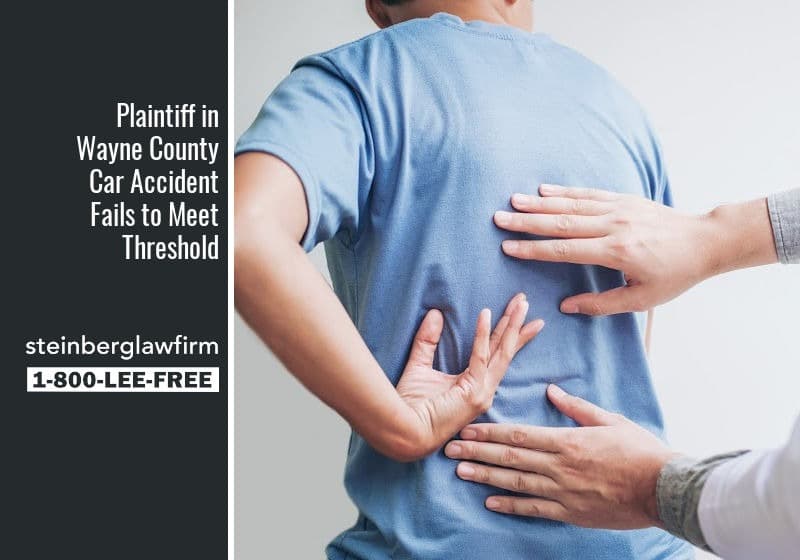 Just because you are injured in a car accident caused by a negligent driver in Michigan does not mean you are entitled to compensation. Michigan is a no-fault state and with that comes special rules that other states don’t follow. One of these special rules involves an injured person from a Michigan car collision proving his or her injuries are severe enough to qualify for compensation.

An experienced and dedicated Michigan car accident lawyer will present your injuries to the judge so a favorable outcome can be achieved.

But showing the severity of the injuries from the accident, how they affected the lifestyle of the injured person, and relating these injuries to the actual car wreck are essential elements to every Michigan car accident case.

No where is this more apparent than in a case released by the Michigan Court of Appeals last week.

Following the October 2012 collision, the plaintiff treated at a pain clinic and suffered several disc hernations in his cervical, lumbar and thoracic spine. He also had severe low back pain. After the second collision in 2014, the plaintiff had treatment for moderate to severe neck pain and low back pain that extended into his right buttock and right leg. He was unable to work for several months after the second car wreck, and required physical therapy and pain management.

The plaintiff’s third car collision resulted in similar pain complaints. The hospital records indicated pain in his head, neck and lower back. After that, the plaintiff began treatment at a medical clinic for headaches, dizziness and pain in his neck, lower back and right leg.

To prove a serious impairment of body function, a person injured in a car collision must show he or she sustained an “objectively manifested impairment” from the car accident that has affected the “person’s general ability to lead his or her normal life.” MCL 500.3135(5); McCormick v. Carrier, 487 Mich 180; 795 NW2d 517 (2010).

The defendant in Mr. Saad’s lawsuit argued that Mr. Saad failed to show an objective injury from the third accident because he did not offer any objective testing that rebutted defendant’s assertion that plaintiff’s injuries were from the first two crashes, and no objective evidence was presented showing any pre-existing conditions were aggravated by the third collision. The trial court agreed and dismissed Mr. Saad’s case.

Mr. Saad appealed to the Michigan Court of Appeals. The Court affirmed the trial court’s ruling. In making this holding, the Court of Appeals found the plaintiff failed to introduce evidence of any physical basis for his subjective complaints of back and neck pain caused by the third collision. In looking at his medical records, the Court found that his complaints following the third crash mirrored those from the first two accidents. Although he had complaints of neck, back and knee pain, his doctors failed to state if they were from the third accident.

In fact, there was no indication from any medical professional that plaintiff’s injuries were related to the third collision, rather from his prior car accidents. Because the records failed to causally relate his injuries to the accident, the Court reasoned the plaintiff could not go forward with his case and the defendant’s motion to dismiss the case was properly granted.

Under Michigan law, a medical professional must relate a new injury to the car accident, or state that a preexisting condition – such as low back pain – was aggravated by the car accident and this latest bout of pain and medical treatment is from the latest car crash. If an accident victim fails to do this, it is almost impossible to get compensation for their injuries.

Second, this decision highlights the fact the threshold requirement is alive and kicking in Michigan. Although Michigan car accident law changed abruptly with passage of the new Michigan no-fault law in May 2019, the requirement that plaintiff’s must show the auto accident changed their lives did not disappear.

Under the new law, a plaintiff must still show the injuries and impairments he or she sustained in the Michigan car collision has affected his or her ability to lead a normal life. Recreational activities, hobbies, work life, and social activities will be analyzed and compared from before versus after the crash in making this determination. It is important to have an experienced and aggressive Michigan car accident lawyer who can help show the court how the car accident changed your life.

Last, this decision highlights the fact that just because you are in a car accident that someone else caused does not mean you automatically get compensation under Michigan law. There are a number of hoops an injury victim must jump through to get pain and suffering compensation. That’s way hiring a Michigan auto accident attorney who knows the terrain and can provide the court with the necessary evidence and proofs is so important.

If you, a family member, or friend has been in a car accident anywhere in Michigan, give our law office a call. The Michigan car accident lawyers at the Lee Steinberg Law Firm are specialists and can answer any question you have.

Our toll-free number is 1-800-LEE-FREE (1-800-533-3733) and we are standing by, ready to serve. We never charge a penny until we win your case and we have helped thousands of clients collect hundreds of millions of dollars in compensation for more than 40 years.