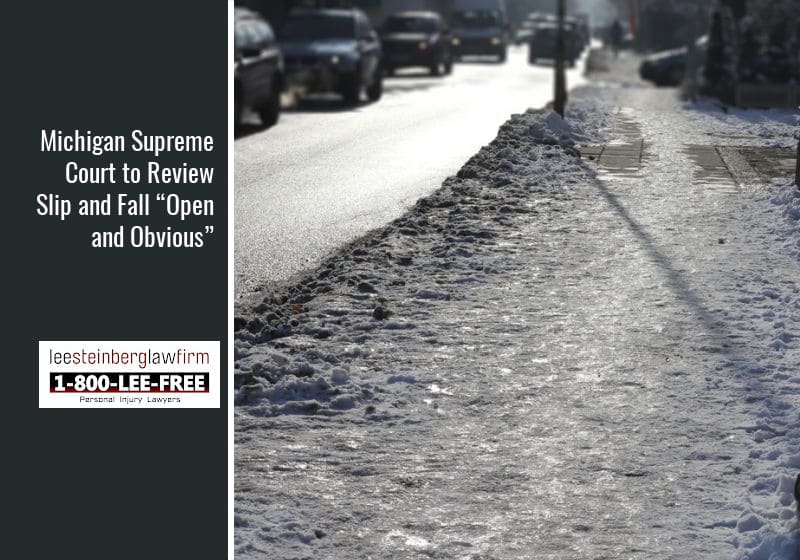 Contrary to popular opinion, slip and fall cases are not easy to pursue in Michigan. This is especially true for slip and fall injuries that occur due to snow and ice. Even the most skilled Detroit and Michigan snow and ice accident lawyers have trouble pursuing cases due to the present law.

What is an Open and Obvious Condition under Michigan Slip and Fall Law?

However, the Michigan Supreme Court may be reviewing how the open and obvious defense can be utilized. The Court issued an important order on February 4, 2022 that may completely change premises liability and the slip-and-fall cases in Michigan. The Court scheduled oral arguments in Kandil-ElSeyed v. F&E Oil Co.

Facts of this Wayne County Slip and Fall Case:

In the case, the Plaintiff was at a gas station covered with snow. After parking at the gas pump, she began walking toward the building to pay cash for the gas when she slipped and fell. After recovering from her fall, she was entered the building and was able to get back to her car. The plaintiff testified the area between her car and the entrance was well-lit, and plaintiff affirmed that she “could clearly see the paved surface in front of her . . .” and snow on the surface.

“In general, a premises possessor owes a duty to an invitee to exercise reasonable care to protect the invitee from an unreasonable risk of harm caused by a dangerous condition on the land.” Lugo v Ameritech Corp, Inc, 464 Mich 512, 516; 629 NW2d 384 (2001). But there is no duty to protect an invitee from an open and obvious danger unless there are special aspects of the condition. Id. at 517. “Special aspects exist when an open and obvious hazard remains unreasonably dangerous or when it is effectively unavoidable.” Wilson v BRK, Inc, 328 Mich App 505, 513; 938 NW2d 761 (2019).

In this case, plaintiff claims that the snow and ice condition was effectively unavoidable. To be effectively unavoidable, a condition “must truly be, for all practical purposes, one that a person is required to confront under the circumstances.” Hoffner v Lanctoe, 492 Mich 450, 472; 821 NW2d 88 (2012). “Put simply, the plaintiff must be effectively trapped by the hazard.” Bullard v Oakwood Annapolis Hosp, 308 Mich App 403, 412; 864 NW2d 591 (2014) (quotation marks and citation omitted). “[S]ituations in which a person has a choice whether to confront a hazard cannot truly be unavoidable, or even effectively so.” Hoffner, 492 Mich at 469. “A general interest in using, or even a contractual right to use, a business’s services simply does not equate with the compulsion to confront a hazard . . . .” Id. at 472-473.

The plaintiff appealed this ruling to the Michigan Supreme Court. Most of the time, the Court will decline to hear a case that is before it on application. However, in this case, the Court ordered oral arguments on the application.

The order issued by the Supreme Court asked the parties to write legal briefs on the following issues:

(1) whether there was a question of fact concerning whether the parking lot constituted an effectively unavoidable condition; (2) whether Lugo v Ameritech Corp, Inc, 464 Mich 512 (2001), is consistent with Michigan’s comparative negligence framework; and if not, (3) which approach this Court should adopt for analyzing premises liability cases under a comparative negligence framework.

The questions presented get to the very heart of premises liability law in Michigan. Lugo v. Ameritech is the most important case in Michigan slip and fall law. In the case the Michigan Supreme Court used the “open and obvious” rule to severely limit the ability for injured individuals to seek compensation from a property owner after a fall.

Overturning the Lugo decision would be monumental. It would place the onus back on the property owner and landowner to maintain a safe store, restaurant or parking lot. Currently, the onus is entirely on the user of the property. If a person walking through a parking lot or up a set of stairs fails to notice even the smallest defect, they currently don’t have a case. This may all change soon.

The Lee Steinberg Law Firm will be watching this case closely. If you have been injured due to a slip and fall on ice or snow, or from a dangerous condition, please call our office at 1-800-LEE-FREE (1-800-533-3733). The consultation is always free and you never pay anything until we win your case.