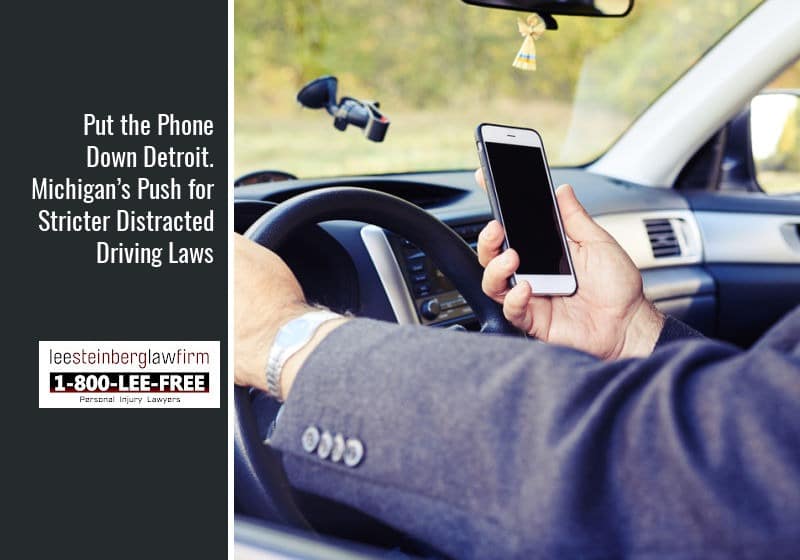 The habits of Michigan and Detroit drivers on the road have changed drastically just within the past 30 years. Not long ago, the worst kind of distracted driver you could encounter on the road was someone whose distraction was caused by personal grooming or eating a bit of fast food. Nowadays, however, we are constantly bombarded by distractions every minute of every day, primarily due to the addition of cell phones in our lives. Michigan cell phone driving laws do exist, but now lawmakers are wanting them to be even stricter.

It is common knowledge that distracted driving due to cell phone usage can be lethal to all drivers on the road. In fact, texting drivers are 23 times more likely to cause an accident than drivers who are focused on the road. Car accidents related to distracted driving increased by 27% in Michigan between 2016 and 2020. Unfortunately, accidents resulting in fatalities also increased over the same period of time, almost doubling their original numbers. In this blog, we discuss the new bill recently passed by the Michigan House to change the current michigan cell phone driving laws, cut down on distracted driving, and how it can keep Michigan drivers safer on their daily commutes.

What’s In the New Bill?

Michigan law regarding cell phone use while driving currently prohibits drivers from reading, typing, or sending messages from a device held in the hand or lap. This can narrowly be interpreted as merely a ban on texting and driving. That means Detroit drivers can still stream Netflix or record a Tiktok while driving and still be compliant with Michigan state law, creating a dangerous environment for all other drivers on the road.

This newly passed bill expands on that law to include accessing social media while driving. It also expands the definition of devices to identify numerous electronic devices including cell phones, pagers, laptops, computer tablets, and “any similar device that is readily removable from a vehicle and is used to write, send, or read text or data or capture images or video through manual input.”

The fines for driving while distracted have also increased under the new bill. Previously, a ticket for cell phone use while driving or distracted driving would cost $100 for a first offense and $200 for each subsequent offense. Under the new bill, a first offense would either cost the guilty party $100 or 16 hours of community service, with each subsequent offense costing $250 or 14 hours of community service.

The fines double if someone is involved in a car accident due to a distracted driver. In addition, upon the second violation under the new bill, a driver would have one point added to their driving record, and two points for each following violation. If a driver accumulates three or more violations within three years, a court may decide to suspend their license for a period of 90 days.

Amendments were added shortly after the bill’s passing that exempt drivers from this rule in certain scenarios. Dialing 911 and interacting with a GPS device are among the exemptions included in the amendment.

For over 40 years, The Lee Steinberg Law Firm has helped injured victims win their cases to collect the compensation that they need and deserve. We care about the health and well-being of our clients. Recovering from an accident caused by cell phone use while driving or distracted driving can take time and can result in many financial burdens. Let us help you get the benefits that you need so you can recover as comfortably as possible.

Please call Lee Steinberg and the Detroit car accident lawyers at 1-800-LEE-FREE (1-800-533-3733) or fill out the Free Case Evaluation Form so we can answer any questions you may have about your accident. You pay nothing until we settle your Michigan personal injury case.