What Are the Deadliest Holidays to Drive?
Skip to content 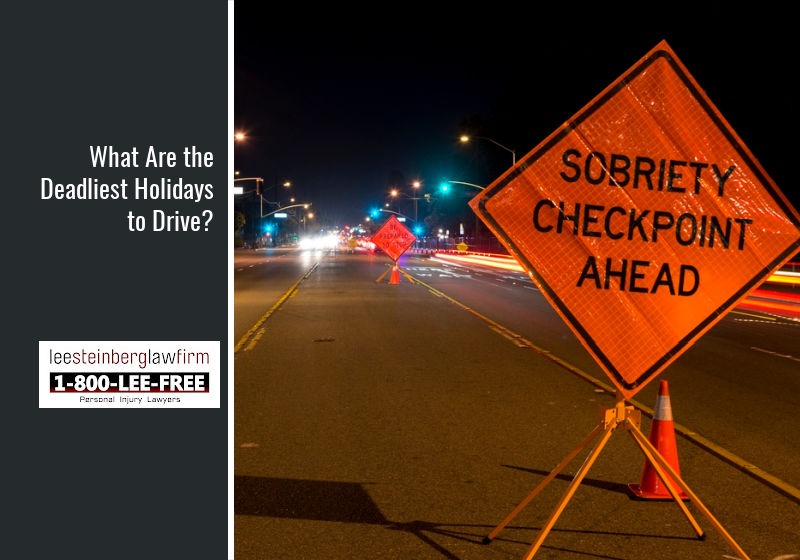 Holidays are for spending time with your friends and family, but they’re also a notorious time for deadly car accidents. It’s all too common to hear of times where someone suffered from a devastating injury or lost their life at the wheel on a holiday. This is largely due to a surge of people traveling and partying. Alcohol consumption greatly increases on major holidays, which increases your likelihood of experiencing a devastating accident that involves a drunk driver.

The National Highway Traffic Safety Administration conducted a 15-year survey to find the deadliest holidays for each state. The study found that fatal car accidents increase by 29.8% in Michigan, and the national average has an increase of 30.2%. Additionally, 6.3% of fatal accidents that occur in Michigan happen on a holiday.

If you are a Detroit resident or if you drive in another part of Michigan, you need to be aware of the deadliest holidays for fatal traffic accidents. Although you should always be careful while operating a vehicle, you need to stay especially vigilant while on the road to avoid reckless drivers and those who are under the influence of alcohol or drugs.

According to the National Highway Traffic Safety Administration’s survey, the 4th of July is the most dangerous holiday to be on the road. When people think of the 4th of July, they typically picture fireworks and neighborhood barbecues, but, unfortunately, there’s also a notable increase in DUIs. In fact, over 1,300 Americans were killed at the wheel between 2015 and 2019 on the 4th of July, and 38% of those crashes involved a drunk driver.

If you’re partying on the 4th of July, you need to make sure you have a designated driver or that you don’t go over the legal limit.

An additional problem on Independence Day is people driving while tired. When people spend a great deal of time celebrating our nation’s independence, they may suffer from depleted energy before getting behind the wheel of a car. Driving while fatigued can be incredibly dangerous and can result in drivers missing road signs or even swerving into oncoming traffic.

Memorial Day weekend is a highly dangerous time for Detroit residents on the road. Americans often use Memorial Day as the holiday to start the summer season. Many people travel for vacations to beaches and other areas across the country, and many people engage in parties and festivities.

Memorial Day has an average of 448 traffic fatalities every year, and the total number of fatalities over the course of three years was 1,343.

Shockingly, 52% of fatal traffic accidents involved people who were not wearing a seatbelt. In addition to staying sober while on the road, you need to ensure that you and your passengers are buckled in.

Labor Day is one of the last days before schools start back up and summer comes to an end, and many take advantage of the Labor Day weekend to travel and have parties. Like with Memorial Day, people will overindulge in partying and drive while under the influence. Additionally, people will often drive while tired, which can be highly dangerous.

On average, 445 people lose their lives due to a auto accident every year during this holiday weekend. 38% of those fatal crashes involve a drunk driver.

In addition to maintaining safety by avoiding driving over the limit, you should avoid driving while distracted. Many of the fatalities over Labor Day weekend are caused by people operating a cellphone or engaging in another distraction while at the wheel.

One might be surprised that Father’s Day is marked by so many road fatalities, but, like with the previously mentioned holidays, people often overindulge in alcohol and there are more drivers on the road. Many people travel for Father’s Day to celebrate their dads and spend time with family, but because there are more people on the road, the number of fatalities also increases dramatically.

Father’s Day also means that there are more drunk drivers on the road. Sadly, nearly 1,300 people lost their lives while on the road over three years, and there’s an average of 431 road fatalities every year.

Unsurprisingly, May 5th is also a highly dangerous time to be on the road. Although Cinco de Mayo started as a Mexican holiday celebrating Mexico’s victory against France at the Battle of Puebla, numerous Americans use it as an excuse to party and drink heavily. DUIs significantly increase on Cinco de Mayo, and 37% of road fatalities involve an inebriated driver.

Stay Safe in Detroit During the Holidays

Surprisingly, Thanksgiving, Christmas, and New Year’s Eve are not the most dangerous holidays to be on the road, but you still need to stay extra careful this holiday season. People drink heavily during the holidays, and more people on the road are over the legal alcohol limit. In Michigan, 5,364 were injured in alcohol-related vehicular accidents in 2019 alone, and 295 people were killed because of drunk drivers that year. Drunk driving accidents are often lethal and can leave innocent drivers and passengers with permanent disabilities.

Detroit has the most drunk-driving-related crashes in Michigan, so you need to be extra careful and remember to never drive with a blood alcohol content (BAC) of .08 or greater.

If you notice someone driving recklessly or someone who’s under the influence of drugs or alcohol, you need to report them. The number of drunk drivers increases during holidays, and it’s no mystery why road fatalities also increase significantly. Even if they don’t pose an immediate risk to you, a reckless or intoxicated driver could seriously injure or even kill another person, so you need to report them.

Whether you’re driving through Detroit or another part of the country on a holiday, you need to stay extra careful. Never drive distracted or while under the influence of alcohol or drugs, and that includes prescription drugs that can affect your ability to operate a vehicle safely.

If you or a loved one were involved in a car accident involving a reckless or intoxicated driver, call a Michigan car accident attorney. Seasoned lawyers can help you hold the negligent person accountable for causing vehicular damage and any injuries you may have sustained during the wreck. For expert car accident and personal injury lawyers in Detroit, call the Lee Steinberg Law Firm. With decades of experience helping Detroit residents get the money they deserve for car accidents and personal injuries, the Lee Steinberg Law Firm can assist you through the entire legal process after experiencing a wreck. Call our Detroit office at 313-483-8775 or click here for a free case evaluation.