Marijuana Is Legal In Michigan, Driving High Is Not
Skip to content 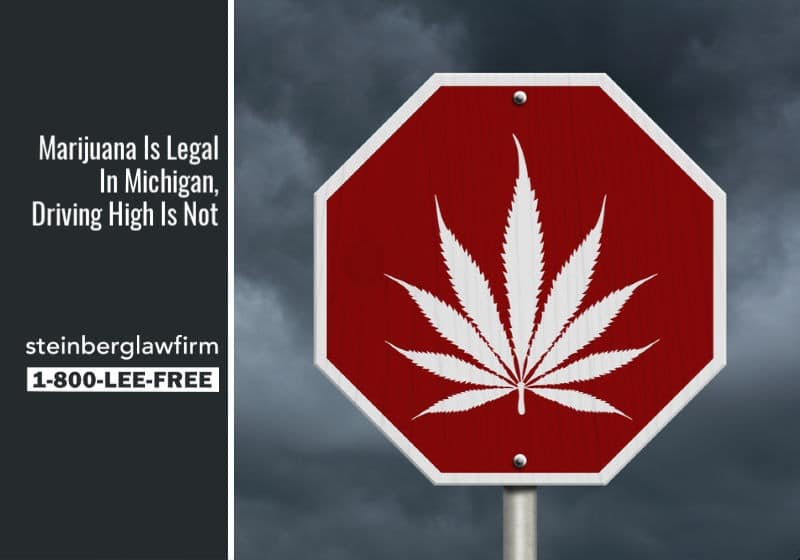 8 Things You Need to Know About Driving High in Michigan

Similar to the growing economic trend in other U.S. states, Michigan residents over the age of 21 with a valid state ID or driver’s license can now purchase marijuana products for recreational use. And it’s expected that the industry could serve about 1.5 million people in the recreational market, according to initial estimates from the U.S. Department of Health and Human Services. The easier access and availability to the once illegal drug has left many to seek out the facts related to what you can and cannot do if using marijuana and driving.

It’s doubtful Michigan State Troopers are looking to target high drivers. Still, several have been trained on how to recognize ‘high on marijuana’ operators, especially in the event of a user being involved in a motor vehicle crash.

“If there’s a strong odor or recently burned marijuana in the vehicle, that could be a red flag. Same thing if we see an open bottle of alcohol in the vehicle. We’re going to start investigating and looking into that further,” stated Kramer. “If they can’t determine anything, we would call in a DRE, or drug recognition expert.”

Several counties have been piloting a roadside mouth swab program to help determine if marijuana is in a driver’s system or not, but much more will need to be done before an impairment screening standard is established.

Studies published by The American Journal on Addictions show both alcohol and marijuana use interfere with a driver’s reaction time and response to road emergencies. For example, the marijuana-impaired drivers examined had a harder time staying within a lane, were less likely to monitor their speed or operate at the limit, had an increased decision time when asked to pass and an increased time needed to brake when a light suddenly changes, increasing their chances for a rear-end collision. They also showed difficulty in recognizing certain sounds such as a car horn. Drunk drivers typically drive too fast, are unaware of other drivers and change lanes too quickly and make the choice to drive aggressively.

But when a low-dose of alcohol and low-dose drug are combined, impairment is much more dangerous than either used alone. The drivers crash more frequently into a sudden obstacle than those who were only on a low dose of marijuana.

Our conclusion: It is best to never drive after using any type of drug, legal or not, or any kind of alcohol.

And remember, Michigan is a zero-tolerance state. This means drivers can be prosecuted for any amount of cocaine or Schedule 1 drug in their system. Schedule 1 controlled substances include LSD, peyote, ecstasy (MDMA), mushrooms, heroin, and marijuana.

We Can Start Working for You Today

We understand that proving another driver’s wrongdoing due to their drug impairment can be difficult, but we have the required expertise in these types of crash investigations and remain highly successful in holding negligent drivers accountable for their actions.

Also read: Drugged Driving Incidents are Increasing in Michigan and Across the Nation