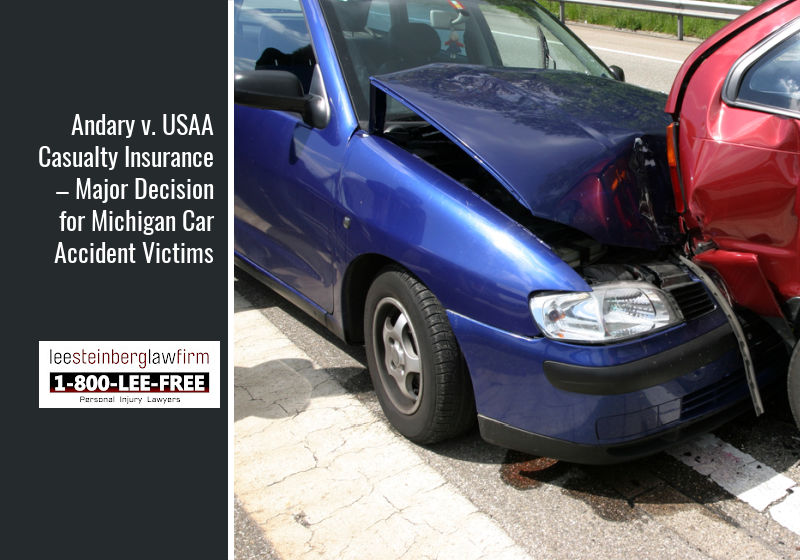 The Michigan Court or Appeals just issued the much-anticipated decision of Andary v. USAA Casualty Insurance Company, docket no. 356487 (published on 08/25/2022). This case has been watched by families, doctors, rehabilitation centers, lawyers, judges and others throughout Michigan, in particular those affected by catastrophic claims and injuries as a result of a car accident.

What Does the Andary Case Say?

In a 2-1 decision, the court held that the changes made to the Michigan No-Fault Law, 2019 PA 21 and 2019 PA 22, do not retroactively effect individuals covered by Michigan no-fault policies purchased before the changes went into effect on June 11, 2019. This is a huge decision because it mandates that insurance companies must pay for life saving attendant and nursing care to catastrophically injured individuals. The cap on reimbursements and family provided attendant care do not apply to those already covered individuals.

What is the Andary Case About?

When the Michigan legislature made major changes to the Michigan No-Fault Law in 2019, perhaps nothing was bigger than the implementation of a fee schedule capping reimbursement rates for medical providers (MCL 500.3157(7)) and the cap on family provided attendant care to 56 hours per week (MCL 500.3157(10)).

Before these changes, family members could provide all 24 hours of attendant care. And like an attending nurse, friends or family members were paid by the responsible auto insurance carrier an hourly rate for the work they did.

In addition, before the 2019 changes medical providers could charge “reasonable and customarily charged” fees for the services they provided. The new fee schedules which went into effect on July 2, 2021 greatly reduced these reimbursement rates.

Further, before the 2019 changes there was no cap for services not covered by Medicare. This changed with the new law. Under the new law, a 55% cap on a provider’s reimbursement for serves not covered by Medicare was implemented. This meant that medical providers who provide such services, such as attendant care and nursing care, were mandated by state government to charge 45% less for their services.

As you can imagine, this huge reimbursement cut would put many nursing home facilities, acute-care facilities, rehabilitation centers, traumatic brain injury centers and other similar medical providers out of business. There would be no way an acute care center could absorb this type of reimbursement rate cut and still stay afloat. Their margins were already razor thin.

The car insurance companies in Michigan knew this. And they did something as pernicious as anything I have encountered in all of my years practicing personal injury law in Michigan. They began quickly applying this new law to existing catastrophically injured patients and their doctors, even though the new law had no language in it making it retroactive.

Although the individuals already injured prior to June 2019 had purchased insurance contracts that promised unlimited medical coverage, no fee schedules, and no caps on family provided attendant care, the insurance companies did what it wanted anyway.

All the sudden individuals like famous Detroit Red Wing Vladmir Konstantinov were losing access to round-the-clock care and life saving treatments they previously could access. Some individuals even died because the facilities and medical providers they relied upon could no longer provide the treatment, or went out of business.

The Andary case itself involved two such situations. Ellen Andary and Philip Krueger were involved in horrible car wrecks many years ago. Ms. Andary had auto insurance with USAA Insurance and received 24-hour care at her home. Mr. Krueger had auto insurance with Citizens Insurance and required in-patient care at Eisenhower Center, which provides inpatient living accommodations and rehabilitative services to individuals with traumatic brain injuries.

Most of the services performed by Eisenhower Center are not compensable under Medicare. This meant that the amount of reimbursement Eisenhower was receiving from the auto insurance carrier was slashed by almost half when Citizens decided to cut it’s payment by 45%, making it impossible for Mr. Krueger to receive his life sustaining care from Eisenhower.

This was done despite the fact his auto insurance policy with Citizens Insurance had no such fee schedule, and in fact provided for the payment of reasonable and necessary customary charges to places like the Eisenhower Center.

As for Ms. Andary, USAA Insurance retroactively applied the 56-hour cap on in-home attendant care found in the new law under MCL 500.3157(10). Again, USAA Insurance did this despite the fact Ms. Andary’s insurance contract had no such limitation and the law when she purchased her contract had no such limitation. Basically, USAA told Ms. Andary’s care workers that any work done after 56 hours in a week would not be paid. They would have to work for free.

The Changes to the No-Fault Law Are Not Retroactive

The Michigan Court of Appeals reviewed both cases and held the two auto insurance carriers were wrong. In making this ruling, not only do the two plaintiffs in the case get back the benefits they were previously receiving for years, but all similar individuals catastrophically injured in a car or truck accident can also get their benefits back!

First, the court held that there was nothing in the 2019 changes that made the application of benefit reductions to those injured prior to 2019 PA 21’s effective date. Had the Legislature wished to overcome the presumption against retroactivity, it could have done so. But because it did not, the changes in the law must be applied prospectively, meaning individuals receiving benefits before June 11, 2019 are entitled to the old unlimited benefits.

The Insurance Companies Violated the Contracts Clause of the Michigan Constitution

The Court went on to find what the insurance companies were doing was a violation of the Michigan Constitution. In doing so, the court held:

We further conclude that even if retroactive intent had been demonstrated, imposing the   new limits would substantially impair no-fault insurance contracts entered into before the amendments’ effective date, and therefore would violate the Contracts Clause of the Michigan Constitution.

Further, retroactive application would alter the injured plaintiffs’ settled rights and expectations under the pre-amendment no-fault act, which were obtained in exchange for premiums based on defendants’ obligation to pay all reasonable charges not subject to fee schedules or caps.

The Andary Ruling will be Appealed to the Michigan Supreme Court

There is little doubt the Andary decision will be appealed to the Michigan Supreme Court. In fact, the insurance company defendants have already said they will appeal. But for now, accident victims throughout the state can savor this hard fought and much needed win.

For some it comes tragically too late. There are cases of individuals who have since died because they were no longer able to get the life sustaining medical treatment they needed. For others, it will provide a world of relief for families who were already struggling financially and emotionally from what the insurance carriers did to them.

The Michigan car accident lawyers at the Lee Steinberg Law Firm, P.C. will keep you appraised of any updates on the Andary case, and similar issues affecting the Michigan auto law. Contact us today at 1-800-533-3733.