Are Higher Speed Limits Worth the Rise in Traffic Fatalities? Call Lee Free
Skip to content 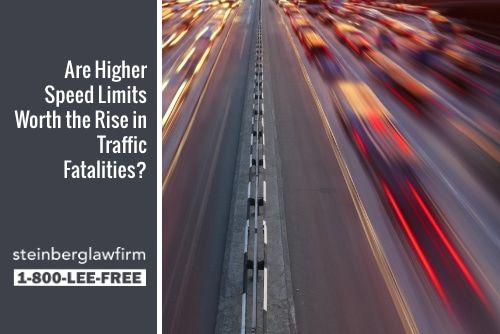 Are Higher Speed Limits Worth the Rise in Traffic Fatalities?

New data released from the leaders at the Insurance Institute for Highway Safety (IIHS) and the Governors Highway Safety Association has sparked interest in developing a speed management program designed to provide better recommendations and traffic engineering changes to reduce high-speed crashes related to speed limit increases on American roads. Although the rise in speed limits has gained popularity over the last three decades by 41 U.S. states, updated statistics now show more lives are being lost due to the mph increases, leaving roadway system managers left to configure new safe speed recommendations for the future.

Michigan raised speed limits to 75 on some highways back in 2017 charged by Public Acts 445, 446, and 447. The increase impacted 900 miles of non-freeways in Michigan to 65 mph, and on 600 miles of freeways to 75 mph, supported at the time by speed, engineering, and safety studies. Routes with increases to 75 included areas of:

About 10,000 people a year die in speed-related crashes, according to the IIHS. In Michigan, that number was around 185 fatalities for 2018 reported by Michigan State Police. Alcohol was a factor in nearly half of those speed-related crash fatalities. Drivers who speed are also likely to be more aggressive and practice other bad driving habits that put other motorists, as well as pedestrians, motorcyclists, and bicyclists at risk of death or serious injuries. So, if you are a “speedster” be warned as the National Highway Traffic Safety Administration (NHTSA) says you may have:

Drivers who speed are also most impacted by four factors identified by the Department of Transportation. These occurrences are known to create an overall rise in speeding and speed-related aggressive driving crashes.

While it may not be too easy or even possible to lower speed limits immediately, should Michigan pause on raising them until new recommendations or standards are released? Until then, our advice is to drive the posted speed limit, sober and never distracted, follow the rules of the road and travel in the right lane vs. the left if a speed feels uncomfortable for you, or have others drive you to your destination.

Also, get to know Michigan’s highway safety advocates, researchers, and local, state officials, and what their approach to the problem may be in the future and we will do our best to keep you updated, safe, and accident-free at any speed in the meantime.

If you or a family member is a victim of an accident caused by a reckless or speeding driver, be sure to seek out the qualified advice of a car accident attorney before discussing anything with an insurance company. The Law Offices of Lee Steinberg, P.C., has been representing accident victims for over 40 years, and we can help you through this challenging and stressful time.