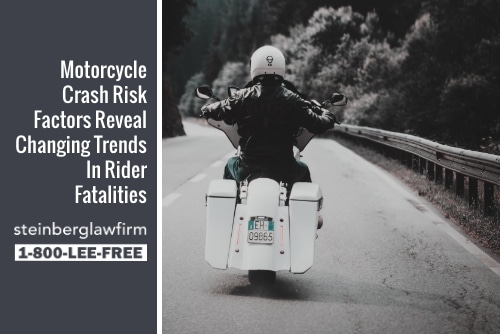 Today, motorcyclists are 28 times more likely than passenger car occupants to die in a crash per vehicle mile traveled. Motorcycles are far less visible to other drivers and less stable than four-wheel vehicles, making riders and their passengers more vulnerable to weather hazards, road conditions, and the most severe accident injuries than other drivers. Early estimates published in May of 2018 from the Governors Highway Safety Association (GHSA) show that even though motorcyclist fatalities in the United States are expected to decrease there are several new trends to be aware of that are creating hazardous road environments for both young and old riders.

Here is a brief look at some of GHSA’s findings based on the National Highway Traffic Safety Administration and the Insurance Institute for Highway Safety data regarding motorcycle crashes in 2017.

Michigan is also home to some of the nation’s most poorly kept infrastructures, and underfunded roadways which may be contributing to crash factors. The Midwest’s brutal winters often create a deep freeze, and the resulting thaw brings havoc to roadway composites. Substantial truckload weight limits are also twice as high as any other state in the nation putting more stress on area roads and causing deep ruts, potholes, uneven surfaces, and debris which can create dangerous road conditions that lead to serious motorcycle crashes and severe rider injuries.

According to GHSA, in 2017, 61 percent of fatally injured motorcycle drivers were helmeted. Although helmet use is an important preventive measure against the most severe accident injuries, such as traumatic brain injuries which can lead to paralysis, permanent disability, or even death, Michigan is one of 28 states that have helmet laws covering only some riders, usually those under 18.

Today, motorcyclists 21 and older in Michigan may ride without a helmet if they have either passed a motorcycle safety course or have held the motorcycle endorsement on their driver’s license for at least two years. Also, riders who choose not to wear helmets must have at least $20,000 in medical payment coverage and higher coverage for any passengers who ride unhelmeted, too. In states like Michigan, with helmet laws that cover only some riders, 42 percent of fatally injured motorcyclists are helmeted.

Helmet or no helmet, these motorcycle accident trends still seem to fall on the wheels of riders when really it is passenger vehicle motorists who cause 70 percent of motorcycle related accidents, injuries, and rider fatalities. Our legal team feels this statistic should make everyone who shares the road with a motorcycle rider responsible for their safety by operating sober, safe, not distracted, and within the rules of the road.

Victims of motorcycle accidents are not entitled to Personal Injury Protection (PIP) benefits, also known as first-party benefits, under the Michigan No-Fault Law unless the accident involved a motor vehicle like a car or truck. Even if you or your loved one were not wearing a helmet, you may still have a strong personal injury case and could recoup a considerable portion of your medical expenses, as well as damages for lost wages, pain and suffering, and more.

Additionally, if someone dies in a motorcycle accident, surviving family members can file a wrongful death lawsuit. The compensation received from a wrongful death suit can include costs for funeral and burial, medical expenses, lost wages, and pain, suffering, and loss of companionship for the survivors.

If you or your family member is suffering from physical and emotional pain due to a motorcycle accident caused in some part by another person, the motorcycle accident attorneys at the Lee Steinberg Law Firm can help. In an initial consultation, we can discuss your claim in depth and help you to understand all your legal options.