What is the Open and Obvious Doctrine? | Lee Steinberg Law Firm
Skip to content 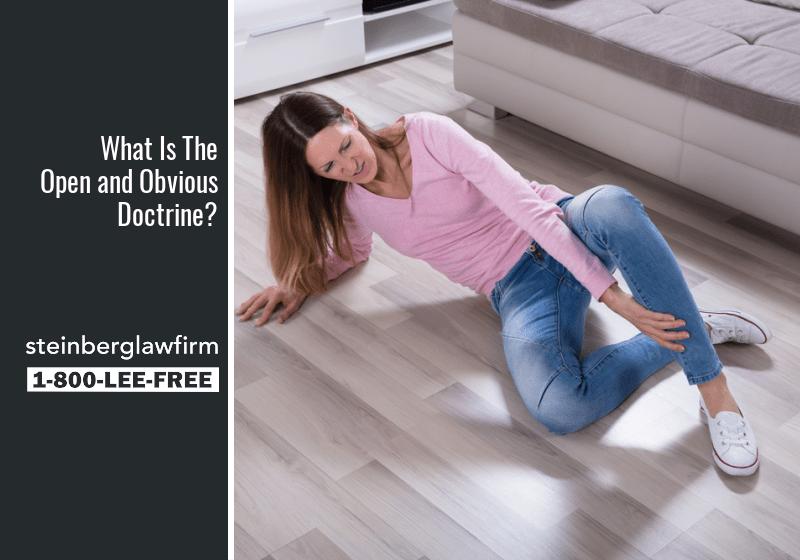 Slip and fall cases and premises liability cases in general are not easy. These cases involve not only proving negligence on the part of the property owner, landlord or property manager, but also proving the injured person was not negligent in causing his or her own injuries.

In Michigan, these cases are especially difficult due to a lethal defense landowners and their lawyers can use called the “open and obvious” defense. Only the most experienced Michigan slip and fall attorneys and trip and fall lawyers are knowledgeable enough in confronting and beating this defense.

But first, here is an explanation of what premises liability law is in Michigan as well as the various defenses property owners can use, including the open and obvious rule.

What Do You Have to Prove in a Premises Liability Case?

Under Michigan law, the injured person in a premises liability lawsuit must prove the elements of negligence. This includes showing (1) the defendant owed the plaintiff a duty, (2) the defendant breached that duty, (3) the breach was the proximate cause of the plaintiff’s injury and (4) the plaintiff suffered injuries.

The plaintiff or injured person has to move all four elements. Failing to prove even one of the elements can result in a judge dismissing the case and the injured getting nothing. A Michigan slip and fall lawyer who handles personal injury cases can assist you in proving these elements so the property owner does not get away with acting with negligence in causing injuries.

What are the Duties of the Landowner or Property Owner?

Under Michigan law, there are three categories of visitors on a property.

1. Invitee: If a person is visiting a premises for a commercial purpose, they are considered an invitee. Invitees are provided the highest protections under the law.

2. Licensee: If a person is a social guest – like a friend visiting your home – they are considered a licensee and they are provided with less protections from dangerous conditions than invitees.

3. Trespassers: They have the least legal protections under the law and can rarely bring a claim for personal injury.

Most cases involve invitees – such as a person shopping at grocery store or mall. Under Michigan law, a premises owner owes a duty to an invitee to exercise reasonable care to protect the invitee from an unreasonable risk of harm caused by a dangerous condition on the land. In addition, if the landowner knows, or by exercise of reasonable care should have known of the dangerous condition, and realizes this condition involves an unreasonable risk of harm to invitees, then the landowner can be held responsible.

But this duty does not extend to dangers that are open and obvious. This is because such dangers, by their nature, apprise an invitee of the potential hazard, which the invitee may then take reasonable measures to avoid.

What is the Definition of Open and Obvious?

In Michigan, a hazard is considered open and obvious if “an average person with ordinary intelligence would have discovered it upon casual inspection.” It is an objective standard, meaning you look at it from the point of view of a regular person, not the specific person who got injured.

For example, a blind person who comes across food that spilled in a grocery aisle is treated the same under the law as a non-blind person in the same situation.

The open and obvious rule in Michigan goes right to the duty element. In essence, it means the landowner or landlord does not owe a duty to visitors for open and obvious hazards in the first place. And because they don’t have a duty, there is no negligence case against them for an injury that occurs on their property.

Although the open and obvious rule is supposed to only require “casual inspection” by the injured person, Michigan courts have greatly expanded this rule. Instead, if a person should have been able to see the hazardous condition, then most judges will deem the hazard open and obvious and can dismiss the case.

For example, it is freezing outside and a person slips and falls on ice in a dark parking lot at night. The parking lot is not well lit, but there is snow in the area. Under the current interpretation of the open and obvious rule, the owner of that parking lot does not have a duty to salt or plow or do anything to make the parking lot safer because the presence of snow and the freezing temperatures should have apprised the visitor that ice would also exist and the parking lot could be slippery.

Exceptions to the Open and Obvious Rule:

However, proving either one of these special aspects is extremely difficult. Just because a condition, like snow or black ice can cause horrible injuries does not make it “unreasonably dangerous” under the eyes of the law. In both situations, the danger must give rise to a uniquely high likelihood of harm or severity of harm.

Below are some examples of how the open and obvious defense was used to get what otherwise would be a good claim for an injured person dismissed.

Plaintiff works for a wholesale plumbing supply store. While at a location, plaintiff, on his own accord, undertook the task of clearing snow and ice from an area near the building’s entrance. Plaintiff slip and fell. Despite the fact plaintiff was attempting to remove a potentially injurious hazard from the main entrance of his workplace, was trying to protect his co-workers and other people in the area from the hazard, the court dismissed the claim based on open and obvious.

An employee of an electric company was assigned to work at Oakwood Hospital. As part of his duties, he was forced to climb an indoor ladder to reach the hospital roof to perform maintenance on of the five hospital generators. The generator on the roof is not easy to access.

The day before his inspection, the snow in the area had been cleared. However, the next day he slipped and fell on ice that had formed on the plank, falling to the roof below. The Michigan Court of Appeals held the ice was not “effectively unavoidable”, this despite the fact Mr. Bullard had to perform maintenance on the generator as part of his job duties, and the only way to get to that generator was by traversing the icy 2×8 plank.

The Court also found the ice was not “unreasonably dangerous” because it did not present substantial risk of death or severe injury, despite the fact Mr. Bullard slipped off a plank and fell 5-6 feet below to another part of the roof.

Plaintiff stepped into a depression or hole in the ground that was covered by leaves. The Michigan Court of Appeals found the hole was open and obvious anyway, despite the fact the leaves covered the hole.

The plaintiff, a tenant at an apartment complex, slipped and fell on ice and snow in the parking lot. A few days before the fall, plaintiff had left his apartment to drive to defendant’s main office and complain to the manager “because the parking lot was such a wreck” and “they weren’t getting it done.” The Court found the condition was open and obvious and not effectively unavoidable because he could have left his apartment to get to his car at a different, less dangerous time. The case was dismissed.

There are countless other cases where the open and obvious defense has resulted in a plaintiff’s case getting dismissed. But all hope is not lost. The Lee Steinberg Law Firm and its staff of Michigan slip and fall lawyers have been successful in getting around this awful rule and assisting our clients.

For example, we recently helped a client obtain a settlement for over $400,000 after a slip and fall.

Call the Lee Steinberg Law Firm at 1-800-LEE-FREE (1-800-533-3733) for a free consultation. We can answer your questions and let you know if you have a case. And we never change a cent until we win your case. Call us free today.